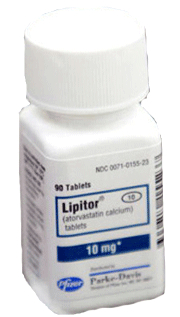 MD and I are safely ensconced in Dallas after a flawless U.S. Air flight that even involved a connection that went smoothly. I’m still immersed in comment hell, but I’m working through them (about halfway, so far). I’m going to give it my best effort to get completely caught up by Christmas.
While zipping through the winter skies I got caught up with a lot of my reading that had stacked up while I was in New York. Buried deep within one of the sections of last week’s Wall Street Journal was an article about a lawsuit against Pfizer, the maker of Lipitor. It seems that one of their own is turning on them.
According to the lawsuit, a former employee, Dr. Jesse Polansky, who was the former director of outcomes management strategies from 2001 to 2003 got the boot because he complained to his superiors about marketing practices he considered improper. What marketing practices? Well, for starters, the Pfizer physician education campaign that

led thousands of physicians to prescribe Lipitor for millions of patients who did not need medication.

This ‘off-label’ business is huge for pharmaceutical companies. The deal is that pharmaceutical companies can market drugs to physicians for only those conditions that have received FDA approval. Physicians often discover other uses for drugs that aren’t FDA approved, but the drug companies can’t advertise them without going through the horrendously expensive FDA approval process. Physicians will tell other physicians about the ‘off-label’ uses for a specific drug, and such uses are often presented at medical meetings. The rub comes when the pharmaceutical companies manufacturing one of these drugs underwrites all or a portion of the medical meeting in which the ‘off-label’ use is presented. In Pfizer’s case, Lipitor is approved for patients with a certain risk level for heart disease, but not for those in the moderate-risk category.

Among other things, Dr. Polansky says Pfizer wanted to extend Lipitor use beyond the indications found on the drug’s label by targeting people at moderate risk of developing heart disease or having a heart attack. He said the educational programs for doctors deliberately misrepresented the drug’s label to encourage Lipitor therapy for people in the moderate-risk category who didn’t need the drug.

Which means that it’s pretty obvious that the folks in control at Pfizer know that those patients in the moderate-risk category don’t need Lipitor (actually, most patients don’t need Lipitor period), yet they continue to encourage doctors to prescribe to them. A sorry state of affairs since all the statin drugs, including Lipitor, are not without side effects, some of which are fatal. It’s all a matter of risk versus reward. To prescribe a medication that has the potential to kill a patient when the medicine won’t really do the patient any good is not good risk management and certainly not good medicine. You would think what with Lipitor being the world’s biggest selling drug with sales of $13.6 billion last year that Pfizer would be satisfied, but apparently not. I hope they get hammered.