It’s 9:30 PM and MD and I just got in from a three hour flight from Dallas. We’ve got to throw some stuff in the laundry, pack a new set of bags, and get up and hit the road at 5:30 tomorrow morning. We’re heading up to our house in Tahoe to meet the kids and grandkids for a few days of skiing. They’re flying in to Reno and driving up, so we’ve got to leave at the pre-crack of dawn to get there in time to be the official parental welcoming committee.
While riding in the cramped seats of the American Airlines CRJ I read today’s New York Times and a bunch of other mags that I had fallen behind on and found a number of blogworthy issues. I’m going to try to get a few up tonight while I’ve banished MD to her packing area. I probably won’t get to most of the comments, however, but I’ll try to get them tomorrow on the road with my handy Verizon Wireless Broadband card.
First, PETA rears its ugly stupid head yet again.
Buried in the back pages of the Times was a short article about how the US Navy employs dolphins and sea lions to patrol coastal naval bases to prevent underwater intruders. Apparently this has been going on since the 1960s and has been successful. The sonar abilities of dolphins allow them to patrol for swimmers and divers and to even detect mines. The dolphins are trained to drop beacons that the naval personnel can then home in on. 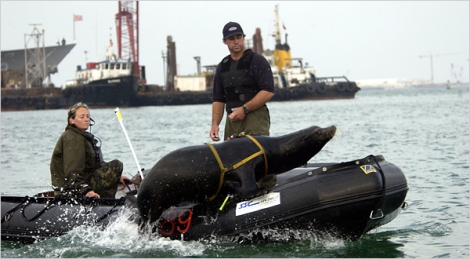 The sea lions can actually take action against intruders.

Sea lions can carry in their mouths special cuffs attached to long ropes. If the animal finds a rogue swimmer, it can clamp the cuff around the person’s leg. The individual can then be reeled in for questioning.

The article tells how the Navy moves these highly-trained animals from one ocean area to another, and how they are given time to adapt to water of a different temperature than that which they are used to. I’m quite sure, given the amount of time and money it must take to train these animals, that they are well treated and well cared for.
Enter PETA.

Stephanie Boyles, a marine biologist and spokeswoman for People for the Ethical Treatment of Animals, said that sea mammals did not provide a reliable defense system, and that they should not be kept in small enclosures.
“We believe the United States’ citizens deserve the very best defense possible, and this just isn’t it,” Ms. Boyles said.