To summarize, the authors hypothesize that the inflammation caused by the infection in the gums causes the pancreatic cancer and/or the increased gastric acidity from the nitrosamines produced by action of the infectious bacteria.
I suppose that inflammation and increased gastric acidity could cause it, but I don’t believe those are the most likely causes. Remember, we’ve got a number of studies showing that the consumption of sweets and a high-glycemic diet appears to increase the risk for pancreatic cancer. There is evidence that obesity, diabetes and insulin resistance are correlated with increased rates of pancreatic cancer. And now we’ve got periodontal disease to add to the mix.
What causes periodontal disease? I’ll give you a clue. Just as with dental caries (cavities), periodontal disease doesn’t appear in the remains of pre-agricultural man. Periodontal disease is easily recognizable from skeletal remains, and it just ain’t there in our meat-eating ancestors. Once agriculture took root (no pun intended), dental caries and periodontal disease became common. It’s hard to find an ancient Egyptian mummy without severe dental disease. And remember, ancient Egyptians lived in the days before sugar, so we can’t blame sugar for their dental disease. They ate a huge amount of grain and 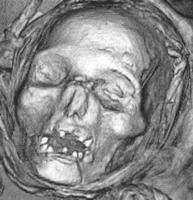 grain-based foods, a fari amount of fruits and vegetables, and very little meat. In fact they ate pretty much the kind of diet that today’s nutritionists would have us all eat to prevent disease. It didn’t do the Egyptians a whole lot of good. The calculus (tartar) deposits on their teeth were often so extensive that they held the teeth in place after death for 2,000 years. The result of these deposits is early bone loss, loose teeth, infection, and tooth loss. In addition, the ancient Egyptians had arteriosclerosis, obesity, rampant tooth decay, and a host of diseases that we consider ‘modern’ diseases.
Sticky, high-carb foods cause periodontal disease. The obesity, diabetes, and insulin resistance mentioned above are probably caused by high-carb diets. The papers mentioned above show that high-carb diets are associated with pancreatic cancer. So, despite the authors speculating about inflammation and increased gastric secretions, I think the periodontal disease data further confirms the hypothesis that excess carbohydrate consumption is more than likely the driving force behind pancreatic cancer.
As if you needed more, this is just another reason to follow a whole-food low-carbohydrate diet.