Pay no attention to that man behind the curtain* 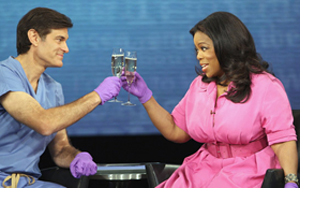 As I was thumbing through the weekend edition of the Financial Times (my favorite newspaper) on a lazy Sunday morning, my eye fell on a little boxed off squib titled Dr Mehmet Oz on the January Detox (scroll to bottom to see the piece).  If I ran across something like this in a local daily newspaper, I wouldnt think much about it, but in the venerable Financial Times?  Since we all know how much good the wonderful Dr. Oz has done Oprah (as evidenced by the photo to the left – were I she, I certainly wouldn’t be toasting him), I decided to read it to see what he had to recommend on detoxing.  I wasnt disappointed.  He lives up to his billing.

How does Dr. Oz recommend we detoxify our livers?  Lets read and see.

I like a simple cleansing fast as an easy, inexpensive means of flushing out toxins and rebooting the system (a juice detox, say, which involves a short-term diet of raw vegetables, fruit juices and water). But it is important to remember that detoxifying the liver, the organ responsible for detoxing our bodies, would take a month of healthy living.

Let me see if I get this straight.  You detoxify your liver by a fruit-juice fast, right?  Which means throwing back at least three or four glasses of fruit juice a day.  Okay, got it.

What happens to the liver to cause it to need detoxifying?  How about fat accumulation?  A fatty liver is one that needs detoxifying.  Fatty livers are way more common than you might expect.  Studies have shown that about a third of Americans are walking around with fatty livers, a disorder called non-alcoholic fatty liver disorder (NAFLD).  No one really knows what the long-term effects of this problem are going to be, but it is known that fatty accumulation in the liver can lead to an inflamed liver, which can then go on to develop cirrhosis and possibly even liver cancer.  Since this epidemic of NAFLD has arisen fairly recently, its unknown how it will play out over the long haul, but I doubt that it will be a good result.

So where does all this fat in the liver come from?  Most researchers think it comes from excess fructose consumption.  The pathways of the metabolism of fructose lead to fatty accumulation in the liver, and giving laboratory animals a lot of fructose gives them fatty livers.  If you couple this information with the fact that fructose consumption has skyrocketed over the last three decades, it makes sense that at least part of the NAFLD were seeing comes from too much fructose.

With these facts in mind, lets take a closer look at Dr. Ozs recommendation to undertake a juice fast to cleanse or detox the liver.

If you go on a juice fast, how much juice do you drink.  Three or four glasses a day, I would imagine.  And I would also guess that these would be decent sized glasses.  Most people dont drink an eight ounce glass of anything.  Eight ounces is only a cup, which really isnt all that much.  Even those little weenie juice boxes that parents put in their kids lunches are 8.45 ounces, and most glasses of juice that people drink are larger than that.  A regular-sized soft drink can contains 12 ounces, which is probably much closer to the size of a glass of juice most of us would drink, especially if we were on a juice fast.  Four glasses of juice – a not unreasonable amount to drink in a day if thats all youre drinking – would end up being 48 ounces of juice.

I went through the USDA database of foods looking for all the juices I could find that had fructose broken out from the total carbohydrate figure and tabulated them.  Take a look at the chart below which is total carbs and fructose in grams.  And remember that 100 grams equals a half a cup.  So when you see something listed at 111.6 grams of fructose, that means more than a half cup.

It should be clear from this chart that a fruit juice fast provides a whole lot of fructose and a whole lot of carbs.  The fructose is particularly problematic in that it encourages fat accumulation in the liver.  The amounts in 48 ounces of any of these fruit juices would be more than enough to stimulate the synthesis and storage of fat in the liver.

How Dr. Oz thinks this would detox the liver is beyond me.

One other note on his cleansing fast.  Its not just fruit juices; it includes raw vegetables, too.  I assume Dr. Oz recommends the raw vegetables for all of the flavonoids, carotenoids, lycopenes and other phytonutrients.  I guess he never learned that most – if not all – of these nutrients are fat soluble.  Consuming raw vegetables and fruit juices without some fat along with them means you dont absorb any of the nutrients.  Dr. Oz must have missed that day at medical school.

So, the actual result of his cleansing detox that is supposed to flush out toxins [while] rebooting the system is that more fat accumulates in the liver, insulin goes up thanks to all the carbs and you dont even absorb the phytonutrients.  Sounds like just a hell of a deal to me.

Lets spend just another moment looking at yet a different piece of idiocy in this small, small piece of writing.

Caffeine throws off all the systems, so drink green tea, which has only a quarter of the caffeine of dark tea or coffee but packs a powerful energy punch.

Oh dear.  Where do we start?  Green tea has almost as much caffeine as coffee, not a quarter of the caffeine.  And, please tell me Dr. Oz, where do we get the powerful energy punch from green tea if its not from the caffeine?
No sooner had I finished reading the Financial Times Oz recommendations, which, by the way, struck me much more as a prescription from a witch doctor than from a trained physician, than MD pointed out that the same Dr. Oz was on the cover of the Sunday magazine that comes with our local paper.  Yep, USA Weekend features our friend expanding on his recommendations.

Im not going to go through them all (you can read them here), but one did catch my attention:

Ditch extreme diets. People almost always fail to lose weight because they try diets that are too radical to stick with. For a lifestyle change to succeed, it must be sustainable. So instead of eliminating all foods that fit into a certain category or counting every calorie, try making changes that are less noticeable but no less significant. If you can eliminate just 100 calories from your daily intake, for example, you will lose about a pound per month. How hard is that?

This is a blatant attack on the low-carb diet without saying it in so many words.  And the notion that if you can eliminate just 100 calories from you daily intake you will lose weight over time is the ultimate recommendation of someone who is clueless about the operation of the energy balance equation.

Im going to leave you with a poem that I believe is prophetic for Dr. Oz and his nutritionally-unsophisticated compadres.  Sooner or later science will out and these folks will be shown for the idiots they are, and they will be left as part of the detritus of the desert of faulty nutritional thinking.  Too bad they will leave a lot of corpses in their wake.

The poem by Shelley is titled, appropriately enough, Ozymandias

I met a traveller from an antique land
Who said: Two vast and trunkless legs of stone
Stand in the desert. Near them, on the sand,
Half sunk, a shattered visage lies, whose frown
And wrinkled lip, and sneer of cold command
Tell that its sculptor well those passions read
Which yet survive, stamped on these lifeless things,
The hand that mocked them and the heart that fed.
And on the pedestal these words appear:
“My name is Ozymandias, king of kings:
Look on my works, ye Mighty, and despair!”
Nothing beside remains. Round the decay
Of that colossal wreck, boundless and bare
The lone and level sands stretch far away.

*Said by Great and Powerful Oz
in The Wizard of Oz