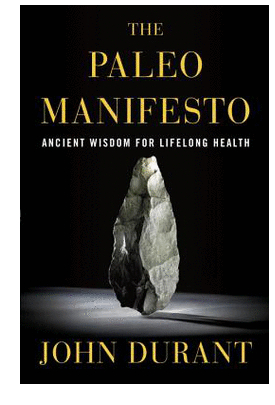 Even zoos, it appears, are not immune from the ignorant outrage of the calories in vs calories outers.
John’s adventures at the zoo are just the first of many. Instead of reading about the science of the Paleo lifestyle, which he did a-plenty, John plunged himself into all of it. He took an experiential approach to Paleo and writes about it brilliantly.
If you want to know what it’s like to go to one of Erwin Le Corre’s MovNat fitness retreats, John can tell you because he went. He ended up bloody, bruised, tired, bug bitten, and exhilarated.
How about a three-day fast and a vow of silence at a Monastary? And not just any Monastary, but the very Trappist Monastery that was the home of Thomas Merton. You can read all about it from his firsthand experience.
Or what is it like to go on your first deer hunt? I found reading about the whole experience mildly hilarious because I’ve been hunting since I was a kid (remember, I grew up in Duck Dynasty country), so it never occurred to me what a virgin hunting experience might be like to an adult.
Want to learn what Crossfit is all about. It’s all in the book.
Unlike all the other Paleo books out there, The Paleo Manifesto doesn’t spend a lot of time laying out any specific regimen to follow. Instead of lashing himself to the mast of a particular diet program, John kind of covers it all in broad brush strokes. “Mimic a hunter-gather (or herder) diet.” “Eat the right food groups.” “Don’t be afraid of fat.” “Eat nose to tail.” That kind of stuff.
So if you want a book that gives you a specific menu, The Paleo Manifesto isn’t your book. Because it isn’t like any other Paleo book out there, but it is a worthy companion to every Paleo book out there. And if you’re contemplating the Paleo lifestyle, it’s probably the best overview and introduction there is.
Plus, if you, like me, are a writer or blogger, The Paleo Manifesto is a grand reservoir for wonderful quotes. And I don’t mean quotes from other people – I mean quotes from John’s own writing.
Here are a few of my favorites.
Talking about the typical low-fat diet…

It’s a meal fit for a serf, sold for a princely sum to slavish Whole Food shoppers.

Re the difference between plants and animals as food sources…

Killing an animal is hard; digestion one is easy. Killing a plant is easy; digesting one is hard.

Discussing the idea that maybe dietary fat is off-putting to many, especially females, because of the negative connotation of excess body fat…

Better terms for dietary fat would have been “lipids,” “triglycerides,” or “sexy” — as in, “Each spoonful of lard contains 13 grams of sexy.”

These just scratch the surface.
Between the covers of The Paleo Manifesto you can find a large vein of solid gold in terms of eye-opening statistics and intriguing studies and plain beguiling stories. It’s kind of like the I Ching. Just stick your finger in between some pages, start reading, and you’ll be rewarded with all kinds of insights.
I discovered a number of scientific studies I wasn’t aware of. My favorite has got to be the 2012 German study finding vegetarians to have a significantly greater likelihood of having mental problems than meat eaters. Knowing as many vegetarians as I do, and having been attacked by as many as I’ve been attacked by, I always figured this was the case. But I didn’t know it had been studied. I pulled the paper, and, sure enough, that was the conclusion. You can read the study Vegetarian diet and mental disorders: results from a representative community survey yourself.
This book has my five star rating. You’ll have many hours of rewarding, revelatory fun reading it.
It’s hard to believe a hirsute, hippy-oid kid from New Yawk City who had never hunted nor shot a gun could be responsible in great measure for popularizing the Paleo lifestyle. If you read this book, though, you’ll learn why.
Before I put paid to this post, though, I would be remiss not to mention some other more hardcore Paleo books you might want to read at some point. I’ve reviewed a few of the older ones in a earlier post. In addition, there is Mark Sisson’s The Primal Blueprint, Loren Cordain’s The Paleo Diet and The Paleo Answer, Robb Wolf’s The Paleo Solution, and, in a shameless bit of self promotion, The Protein Power LifePlan (PPLP). When MD and I wrote  PPLP, it was intended to be a Paleo lifestyle book but our publisher wanted to try to ride the coattails of the enormous bestsellerdom of Protein Power. So the execs at the book house decided to go with PPLP. We had no choice in the matter. What most people don’t realize is that the authors of books have complete 100 percent control over what’s between the covers, but no control whatsoever over what goes on the cover. The cover is the company’s marketing piece. So instead of having the first real modern day Paleo book in print (that honor went to Loren Cordain with The Paleo Diet, published almost two years later), we are still relegated to the lose-weight diet section. But PPLP is really a Paleo lifestyle book.
As always, if you have a favorite Paleo book or if I’ve forgotten one of the standard bearers, or if you disagree with my choices, please let me know in the comments. Feel free to post your own mini reviews.