About a month ago I posted on a Swedish overfeeding study and how the results were misreported in the press. This study showed that increased carbohydrate intake can cause an increase in certain liver enzymes associated with the metabolic syndrome. Along with this liver enzyme data the authors reported on metabolic rate changes that are instructive in our quest to determine the existence (or lack thereof) of the metabolic advantage.

I would imagine that most people reading this blog have had problems with excess weight sometime in their pasts. Those of you who have struggled with overweight probably have little sympathy for those who have the opposite problem – that of inability to gain. Despite how easy it seems for those with weight problems to gain weight and especially to regain lost weight, it is extremely difficult for many people to gain weight almost irrespective of how much they try.

The medical literature is full of overfeeding studies in which subjects are encouraged to eat substantially greater amounts of food than they typically eat in an effort to get them to gain weight. Probably the most famous of these are the Vermont prison overfeeding study conducted by Ethan Sims back in the 1970s. These studies, like the starvation studies of Keys, would probably never make it past the ethics review today, and will likely never be repeated.

Sims and his team overfed prisoners and found that despite being overfed the same number of calories there were large differences in the rate of weight gain between individuals. And he discovered that when the overfeeding stopped, there were differences in the rates at which inmates lost the weight they had gained. One of the lessons from these studies is that individuals have different predispositions to gain and lose weight independent of caloric intake.

Another lesson is that overfeeding tends to increase metabolic rate, allowing a dissipation of many of the excess calories consumed. As I’ve pointed out before, the calories in/calories out part of the energy balance equation are not independent variables. In other words just because you decrease (or increase) calories in doesn’t mean that calories out stays the same. Virtually all overfeeding studies show that there is much less weight gain than the increased caloric intake would predict. This effect is so common that German researchers in the early 20th century gave it the name luxusconsumption, meaning the wastage of calories by increasing metabolic rate during overfeeding.

We can see luxusconsumption at work in the Swedish fast food overfeeding study. The authors were a little hazy about the actual caloric consumption of the subjects, reporting it differently in two places, so we really can’t use their figures for our own calculations. The table below shows the increases in weight and metabolic rate during the 28 day study. We can make some calculations from these numbers. 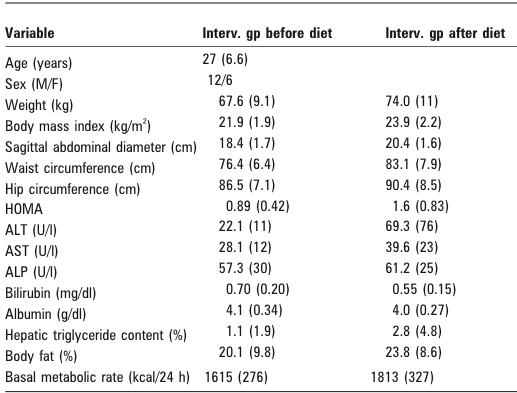 Since the data isn’t broken out by male/female I did my calculations based on all the subjects being male since two thirds of them were. I worked backward from the BMI and calculated the average height of the subjects as being 176 cm.

My calculations show that prior to starting the overfeeding, the average subject should have had an RMR of 2064 kcal/day. After 28 days of overfeeding and a 6.4 kg ( 14 lb) weight gain, the RMR calculates to 2152 kcal/day, about a 4% increase.

When the Swedish researchers measured the RMR directly using the ventilated hood technique they found a starting RMR of 1615 kcal/day that increased to 1813 kcal/day, a little over a 12 % increase.

Weight increased from 67.6 kg to 74 kg, a little over a 9% increase, while the RMR increased by 12% as compared to the 4% predicted by the Harris-Benedict equation. This measured increase in RMR that is greater than the weight gain would predict is luxusconsumption in action.

Before we proceed to the question of metabolic advantage and macronutrient consumption there is one other notion we need to discuss and clarify: data presented in medical studies as averages of all the data collected. This often confusing issue will be the subject of the next post.

Photo by call me hangry 🇫🇷 on Unsplash