One of the dumbest headlines ever 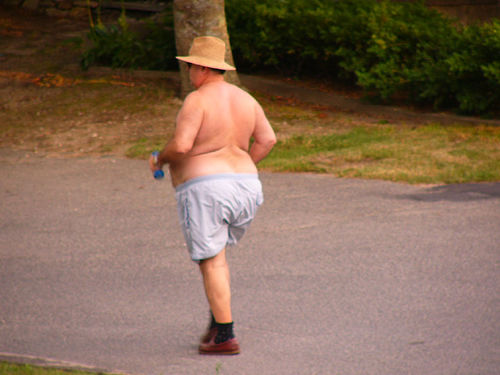 A few days ago the Washington Post published an article with what has to be one of the dumbest headlines I’ve ever read.

New Guidelines Make It Easy to Get Fit

The article goes on to discuss how new US government guidelines cutting the previously recommended amount of exercise required for some minimal level of fitness even more.  Which, of course, makes it easier to get fit.  Right?
Only the government could come up with such idiocy.  It fair takes one’s breath away.  Could anyone else in his/her right mind imagine such stupidity? Or is it just the people we give our tax money to that think this way?  Changing the guidelines helps us get fitter easier? Jesus wept.
This article (and the guideline changes behind it) reminds me of an old joke that I heard as a kid and thought pretty funny at the time.  And still do, I guess, since it points out the brainlessness of these kinds of statements.  Here goes.
Late in the afternoon, a man comes into his house panting, puffing and sweating profusely.  His wife looks at him and says ‘What happened to you?’
The man croaks out between gasps for air, ‘I ran home behind the bus and saved two dollars.’
His wife looks at him scornfully and says, ‘What an idiot.  Why didn’t you run home behind a taxi and save $20?’
That’s a joke, but it’s the same logic behind the “new guidelines mak[ing] it easy to get fit.”  One wonders why, if these new guidelines make it so easy, that the government doesn’t decrease the recommendations even more?  That would make it even easier.  In fact, why not recommend 3 minutes of exercise per day, then virtually everyone could become fit. Even the guy in the photo at the top of this post.
As the old miner said to Butch and Sundance:

Morons.  I’ve got morons on my team.

And indeed we do have morons on our team, and we pay them each April 15.