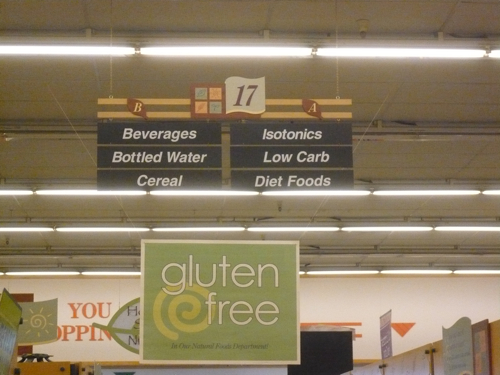 Just a bunch of odds and ends, none of which is worth an entire post.
Low-carb gains a foothold.
First, I’ll start off with the good news, then I’ll finish with the bad.
I took the photo above yesterday at Raley’s, a giant supermarket (and I mean giant) in Incline Village, NV.  There were no signs promoting low-fat foods anywhere in the store.  I took this to be a sign that enough customers were looking for low-carb foods and had asked for help that management decided to make the low-carb section (there really is one) easier to find.  I take this as a positive sign.
Tahoe skiing
We’ve been skiing with the kids and grandkids, all of whom have come to town for spring break.  We’ve had a blast, but family commitments have kept me from attending to this blog as much as I usually do.  Family commitments along with a few snafus, more about which later.  The picture below is from the top of a foggy ski run overlooking Lake Tahoe.  It was taken Monday when the weather was less than optimal.  Fortunately, it has improved since. 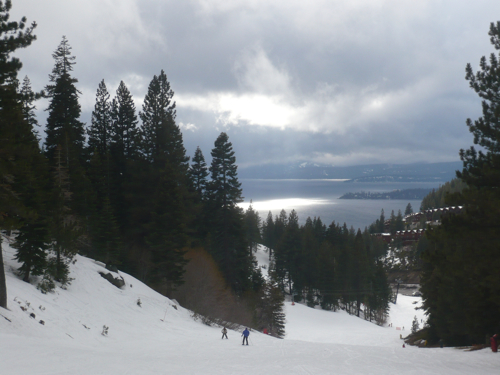 Airline/Expedia cautionary tale
One set of kids and grandkids flew in from Dallas and had a disastrous experience, which I want to relate in the hope of perhaps preventing it for some of you readers.  The tickets for this trip were purchased long ago through Expedia and were on US Air from Dallas through Phoenix to Reno.  When purchased, the confirmation had seat assignments for all four of the passengers.  Our son and fam arrived at the airport about an hour and a half early and went through the automated boarding pass machines.  The boarding passes that were issued them had no seats listed.  When my son went to the counter to speak with an actual human, he was told there were no seat assignments because his entire family had been bumped from the flight.  When he showed her the Expedia confirmation complete with seat assignments, she told him that Expedia travelers got bumped first.  She also told him that it was the airlines policy to overbook by about 20 percent, which almost never caused a problem because of cancellations and no shows.  She said that the only two times this didn’t hold was over Christmas and Spring break weeks, the only time, she said, that she really hated her job.  It would seem to me that the airlines would realize this and maybe not oversell the flights during these periods, but that’s just me.  I’m not an airline decision maker, but it seems pretty obvious.  Especially since they had to fork over four free flights on US Air and a bunch of meal vouchers.
The fam was booked on a later flight, and, of course, had no seats together.  So they had to fight that fight in order for a parent to be able to sit with each kid.  Same thing on the flight to Reno.  The kids got to the airport early in the day, waited around, and finally got to Reno at about 10:30 PM (midnight thirty for them and a long, long day for two little boys).  The other part of the fam came into the Reno airport as well, and we had it timed so that everyone got in at about the same time.  This airline fiasco caused a huge logistics problem for the family Eades, but we made it through it.


The moral of the story is to not book through Expedia and expect all to go smoothly, especially during busy times.  The son involved called the airline and made sure they had confirmed seats on the way home.  If you book with Expedia, I would recommend you do the same.
I use Expedia or Travelocity to find the least expensive flights and best routes between destinations, then I go directly to the airline site to reserve.  It’s usually a little less expensive than Expedia or Travelocity, and I am confirmed with the airline directly.
Blog info and snafus
There are a few blog issues I need to deal with.  First, I performed the much-loathed task of going through the stacked up spam caught by the spam filter and found about a dozen comments lodged therein.  I don’t know why they got caught – they didn’t have a bunch of links embedded, which is usually what trips them up.  I don’t know why the spam filter got them, but it did.  If you have had a comment over the past week or so that has remained unposted, you’re probably one of the victims.  I’ll get to them all soon.
Another thing I discovered, to my great chagrin, is that I have about 500 emails in my Gmail account from readers of this blog.  A couple of years ago I hired a blog consultant to help make my blog better.  The installed Feedburner to allow readers to sign up for the blog in their Google or other readers.  It also allowed people to sign up to receive the blog via email.  What I didn’t realize is that the blog came to those who signed up under my Gmail address.  Many people simply hit reply and sent me a comment or a question about the blog – much as others do in the comment section.  Problem is I never read my Gmail mail.  I have it as a repository for all my emails, which I have forwarded from my regular email address.  I keep all the emails in the Gmail account so that I will have them all in one place since I use so many computers.  I want to have them in case I ever need them.  But I never read them in Gmail.  When I heard from someone that he had been trying to contact me numerous times and hadn’t gotten a response, I asked how he had been trying.  He said through Gmail.  When I went to the account and searched, I found hundreds of people who had done the same.  I fixed the situation so that readers can’t simply hit reply.  I can’t possibly deal with all those emails that are already there, so if you have been waiting for an answer, you had better resubmit through the comments section.  Sorry for all the hassle. 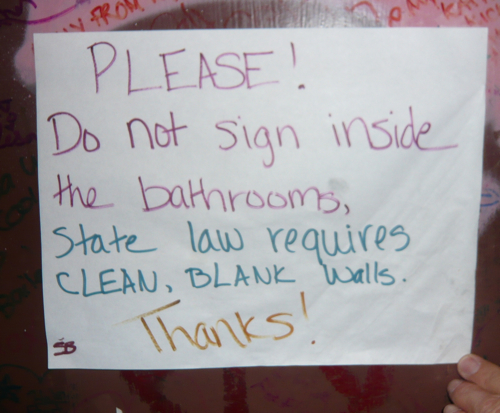