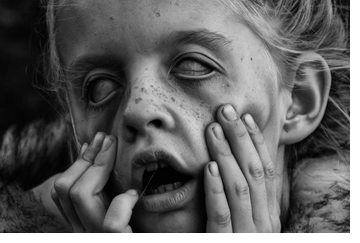 I so often come across such breathtaking nutritional ignorance foisted off as legitimate information that I’m left feeling like the girl in this photo. I wrote about this woeful ignorance on the part of the medical community in my last post.  Now it’s time to take a look at the misinformation many registered dietitians dispense as a matter of course.
I have subscriptions to many magazines, most of which I save up to read while I’m on airplanes so I can trash them after I read them and lighten my load as I travel.  A couple of days ago I was on a flight from Newark to Seattle casually paging through a golf magazine when I came upon one of these well-meaning (I’m sure) but totally incorrect little bits of advice.  The only saving grace is that I’m sure the vast majority of people reading this magazine will totally ignore this advice and go on doing whatever it is they’ve been doing.  But the advice is so abominably wrong that it cries out for exposure.
I’m sure the magazine needed a little space filled up so the editor charged one of the magazine’s staff writers come up with a fluff piece to fit the space required.  The editor may have specified that the piece be nutritional in content because the add right below it is for Planter’s NUT-rition line of nut products “specifically designed to give you the taste you want and the energy you need.”
So, the staff writer contacts a registered dietitian and picks her brain.  Based on the dietitian’s responses, it was slim pickings indeed.
The shtick of the piece is that the snacks favored by a handful of professional golfers were to be analyzed by the dietitian.  The piece starts out thus:

Here’s how Tour pros satisfy those mid-round munchies – and how you can stay energized for all 18 holes.

Here is a bit of the actual piece that I scanned.  I was unable to find a link to the article. 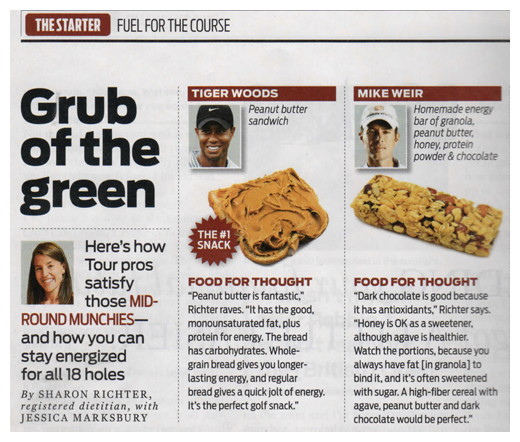 Then it’s off to a pro by pro (there are snacks from seven pros) analysis and the idiocy begins.
Tiger Woods is first.  His favorite snack is a peanut butter sandwich.  Our registered dietitian, Sharon Richters, babbles (or raves, as the article puts it) about the good fats and protein in peanut butter then cuts to the pure idiocy:

The white-bread, brown-bread double whammy.  What wonderful nutritional advice.  Somehow this woman has got it in her head that carbohydrates, and only carbohydrates, provide energy.  It gets worse.
Canadian golf pro Mike Weir snacks on a homemade energy bar made of granola, honey and a bunch of other stuff.  Says our registered dietitian:

Honey is OK as a sweetener, although agave is healthier.

I suppose agave is ‘healthier’ (a totally grammatically incorrect construction, by the way) than honey if you choose to disregard scads of medical evidence and choose instead to believe consuming more fructose makes you healthier.  Honey, like table sugar, is half fructose whereas agave nectar is about 90 percent fructose.  I don’t know about you, but I would prefer to minimize my fructose intake.
English golfer Paul Casey allegedly throws back walnuts during his rounds.  Not so good, says Ms. Richter, RD.

Walnuts alone will not provide enough energy.  You’re on the course for hours at a time, so I suggest adding carbohydrates for energy.  Fruit is always a good idea – bananas are easy to carry around and eat, and coconut water is a good source of carbs.

Jesus wept.
It takes a certain genius to cram so much misinformation into such a little space.  Let’s deconstruct.
Why is it that so many people – especially registered dietitians, it seems – believe that carbohydrates are the only source of energy available?  This notion is widespread.  You need energy, therefore you’ve got to eat carbs.
Walnuts contain over twice the energy than the do same dose of pure carbs.  And this energy – in the form of fat – provides a much longer burn time than would a similar dose of carbs.  So if one is on the course “for hours at a time” why on earth wouldn’t a ready source of fat such as walnuts be a vastly better snack than a comparable amount of carbs?
The energy in foods is represented as the caloric content. According to the USDA tables, a medium banana provides 105 calories, most of which comes from sugars.  One ounce of walnuts – which isn’t much of a snack – contains 185 calories, most in the form of monounsaturated and polyunsaturated fats along with a little protein and almost no carb.  Most people using walnuts as a snack would throw back a few ounces over the course of a round of golf, so you tell me which is the best energy source.
And when walnuts or other low-carb, high-fat snacks are consumed, insulin remains low, allowing the body to access stored body fat for any extra energy that might be needed.  If the snacks are high-carb – as this woman suggests – insulin levels rise, making it more difficult for the fat cells to release fat, causing the cycle of more hunger, more carb consumption, and more insulin.
To continue with this nonsense, tell me please when coconut water became a good source of carbs?  The USDA tables tell us that a full cup of coconut water provides a measly 46 calories that come primarily from the 6 or so grams of sugar contained therein.  Doesn’t sound like much of an energy source or a carb source to me.
Do these people learn this in school?  Do they just make it up because it sounds good?  Where are their brains?  It took me about 30 seconds to search the USDA database of foods to find these numbers, so why couldn’t the authors of this drivel have done the same and saved themselves the embarrassment of having this nonsense in print under their names?  It beggars belief.
I once read that golfers are the least intelligent of all professional athletes.  I don’t know if that’s true or not, but let’s say it is.  I’ve seen Paul Casey interviewed a number of times, and he seems – from my limited observation – to speak with the same degree of intelligence as most other professional golfers I’ve heard.  So let’s assume Paul Casey is in the middle of the pack intelligence-wise of all professional golfers.  Professional athletes – as a group – are not at the top of the intelligence list in general.  By this reasoning, we might say that Paul Casey operates at not the highest level of intelligence, yet he has sense enough to pick walnuts as a snack instead of bananas and coconut water.  What does this say about the level of intelligence of the people writing this article?
Before you attack me for casting aspersions on the intelligence levels of anyone, please realize that the above is tongue in cheek.
Let’s look at one more, then I’ll quit.
Golfer Luke Donald chows down on Chocolate Chip Peanut Crunch Clif Bars and dried apricots during his rounds.  Our dietitian likes the idea of apricots.

Dried fruit is a good source of carbohydrates.

Gotta get those carbs in.  I suppose that these people are blissfully unaware of our millions of years of evolutionary history.  A time during which we humans cut our teeth on protein and fat while pretty much hunting to extinction most of the large game animals on the planet.  Why do they persist in the notion that the only way we can get energy is via carbohydrates?  Do they think we noshed on carbs as we hunted the wooly mammoth and the cave bear into non-existence?

The Clif Bar is a bit high in sugar, but it doesn’t have a lot of junk in it.

Hmm.  Interesting.  “A bit high in sugar, but doesn’t have a lot of junk in it”?  What, pray tell, is sugar, if not junk.  Sugar is nothing but empty calories, half of which are fructose.
I’ve got to quit before I do permanent damage to my forehead from beating it against the desk.
It should go without saying that nutritional ignorance and misinformation abounds.  You can get it from all sources, including, sadly, your own doctor.  I doubt that many readers of this blog would be swayed from their nutritional course by the kind of drek written in this golf magazine, but others probably are.  We’ve all got to be vigilant and work to stamp out nutritional idiocy wherever we find it.  It’s a real jungle out there filled with clueless people with titles of one sort or another ready to snare the unwary with this dopey stuff.  Don’t fall victim.