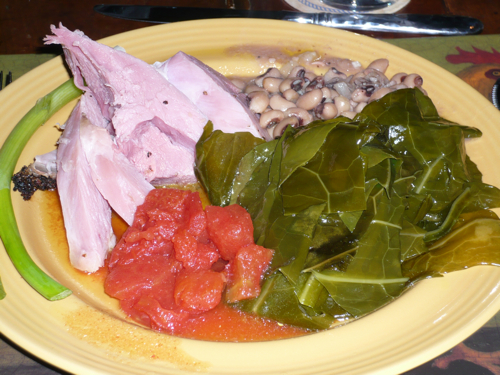 What you see above is a photo of the very meal I ate on New Year’s day as I laid around recovering from New Year’s Eve.
I eat black-eyed peas once a year – on New Year’s day. It’s an old Southern tradition that’s supposed to bring good luck. Along with the black-eyed peas are slices of smoked, peppered ham, stewed tomatoes, collard greens and a green onion. It’s what MD has made every New Year’s Day since we’ve been married. She actually made some cornbread, too, just for tradition’s sake, but I’m not much of a cornbread fan, so I abstained. I try never to waist carbs on something I’m not all that crazy about.
If you ever wonder what to do with all the ham that’s left after the first meal, you can follow my lead and make perfect ham sandwiches.
Here are all the fixin’s for such. I’m not a big fan of sprouts – they always make me think I’m eating grass. But these are broccoli sprouts, which are loaded with sulforaphane, so I’ll make an exception. Enough tomatoes, lettuce and mustard and I’ll never taste them. 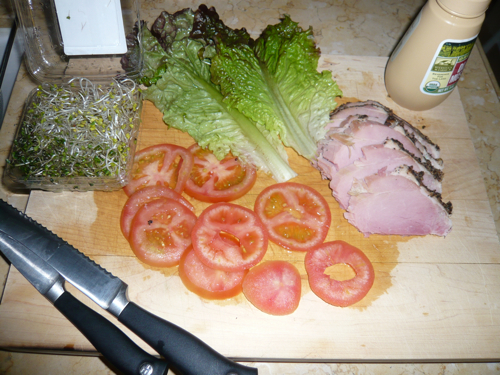 Below is the perfect ham sandwich. A big slice of ham with good mustard, tomatoes, lettuce all contained within two more slices of ham to replace the bread. It just doesn’t get any better. These sandwiches will be my lunch for the next week (or until the monster smoked, peppered ham that MD’s brother sent us for Christmas is gone). 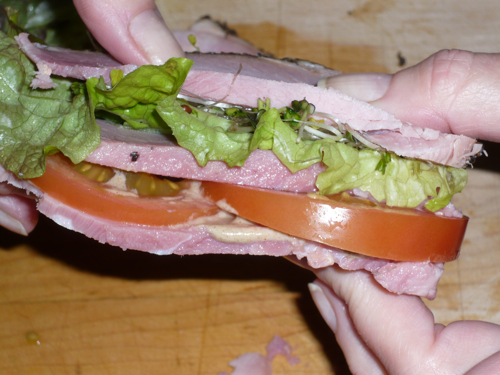 It just doesn’t seem right that you can eat this well and lose weight and cure disease. But as we who haven’t fallen victim to low-fat-itis know, you can.