I just started reading Barbara Kingsolver’s new non-fiction book Animal, Vegetable, Miracle, and, so far, I’m not too crazy about it.
Ms. Kingsolver and her family moved from their long-time residence in Tucson, Arizona to southern Appalachia to live off the land. Her husband had property there that he had owned for years and where the family had spent most of their summers to avoid the brutal Tuscon heat. The plan was to move there, live in the little cabin on the property, and renovate 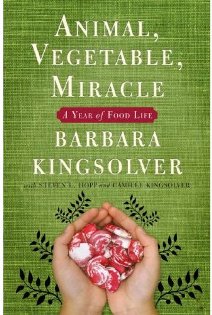 the house to make it suitable for full-time living for a family of four. Once ensconced in the house, the idea was to eat only foods that the family grew in their own garden or those foods that could be traded for or bought from other local farmers.
I’m a little way into the book, and I’m having a tough go of it. Not because it isn’t well written because it is. Ms. Kingsolver brings a novelist’s ear for detail and her prose is easy on the eye. My problem is that the whole concept is just a little too smarmy and goody two shoed for my taste. In my opinion Ms. Kingsolver et al set out on this adventure for all the wrong reasons, the primary one being that the group was interested not in just eating local but in reducing the fuel consumption required to transport food to them in Arizona. The good health to be had by eating local was a consideration, of course, but seemed to be a smaller one than the desire to reduce consumption of oil. It probably never figured into her calculus the amount of oil it required to move the entire family across the continent to undertake this experiment in saving oil.
Ms. Kingsolver is one of those people who appear to believe that everything is good and healthful as long as it comes from the land. Aside from the fact that there are many poisonous plants, all of which come from the land, there are also wheat, corn, rice, potatoes and a host of other carb-laden plants the eating of large amounts of which can make you overweight and insulin resistant. Even organic ones. Needless to say, if I were to forced to eat Pop-Tarts, I would rather have Pop -Tarts made with pesticide-free ingredients, but the damage from the huge amounts of carb in the Pop-Tarts wouldn’t be lessened by the fact that they were ‘organic.’ This is a lesson lost on Ms. Kingsolver who bumbles on waxing poetic about the wonderful pies, cakes and other crap she makes from ‘wholesome,’ locally-produced foods. And early on in the book she takes pot shots at dieting in general and low-carb diets specifically. After writing a paragraph or two savaging dieting in general and fad-dieting in particular, she writes the following:

People hold to their food customs because of the positives: comfort, nourishment, heavenly aromas. A sturdy food tradition even calls to outsiders; plenty of red-blooded Americans will happily eat Italian, French, Thai, Chinese, you name it. But try the reverse: hand the Atkins menu to a French person, and run for your life.

I would counter that the Frenchman would see more similarities in a low-carb diet, full of meat, fat, green leafy and colorful fruits and vegetables than he would in the standard American diet filled with all the high-carb crap most people here eat. He might miss a slice of bread or two here and there, but that would be the main difference.
Ms. Kingsolver’s implication – at least in so far as I’ve read – is that if one eats only locally produced foods tended with loving care, one will be healthy. I can tell you from first hand experience that nice though it might be to believe, it just ain’t so. MD and I have taken care of many patients who did in Arkansas just what Ms. Kingsolver and family did in Virginia: they grew all their own food (both plant and animal) in an effort to get healthy. There is so much hype about the crappiness of the standard American diet crawling with processed foods of every stripe that it is easy to fall victim to the if-it’s-organic-it-must-be-healthful con. Homemade ice cream with organic cream and organic sugar and home grown fruit seems so much more wholesome than store-bought, but your pancreas can’t tell the difference. If you eat it (in large quantities) they will come. ‘They’ being enlarged fat cells and hyperinsulinemia. And ‘they’ come whether it’s ‘organic’ or not. (Again, were I planning on going face down in the ice cream, I would prefer it made with ‘wholesome’ ingredients, but I wouldn’t fool myself that my pancreas wasn’t going to pay the price.) Ms. Kingsolver has fooled herself and her family.
Another thing not mentioned in the book (at least to the point to which I’ve read) is how Ms. Kingsolver and her family could afford such a venture. The implication of her story is that if we all picked up and moved to Appalachia (or its equivalent) and lived off the land, what a wonderful world this would be. But most of us can’t because we couldn’t afford to.
Let me pull back the curtain and tell you how this all works if you’re an established author, as Ms. Kingsolver certainly is. You go to your publisher with an idea put together in the form of a book proposal. In this case her idea was that she move with her family to the sticks and live off the land for a year and write a book about it. The publisher says, ‘Hey, that’s a great idea. How about we give you an advance on the book?’ I’m sure Ms. Kingsolver was well paid to spend her year on the farm.
Don’t misunderstand me. There’s nothing wrong with book advances. MD and I get them every time we write a book. Authors are paid in advance (against future royalties) because book publishers understand that writing a book is a time-consuming process and that most non-fiction authors have other jobs that provide them with an income. Most people can’t take time away from their regular job to write a book unless they can replace the lost income from some where else, thus the advance. Virtually all non-fiction books are written by authors who received advances. Next time you read about someone’s great adventure, understand that the adventure was probably underwritten by the publisher. The author came in with a book proposal about the great adventure, the publisher produced an advance, the great adventure was had and written about. The publisher hopes the book will sell enough copies to repay the advance and put a little money in the publisher’s pocket for taking the risk. And the risk is much, much less with such an established author as Mds. Kingsolver, and, so, I would assume, her advance would be commensurate.
Once I finish the book (if I indeed do) I’ll try to give a fuller review. These are simply my thoughts so far.
I have however had a moment of insight provided by this book. When it first came and I ripped it from its Amazon.com packaging and started to flip through it, the book fell open to page 167, on which was this small section that I read without the context of any of the rest of the book.

It was dark by the time we headed back through the cornfield to Elsie and David’s house. At low speeds our car runs solely on battery, so it’s spookily quiet, as if the engine had died but you’re still rolling along. We could hear night birds and the tires softly grinding dust as we turned into the field.”Stop here,” David said suddenly. “Pull ahead just a little, so the headlights are pointing up into the field. Now turn off the headlights.”
The field sparkled with what must have been millions of fireflies – the most I’ve ever seen in one place. They’d probably brought their families from adjacent states into this atrazine-free zone. They blinked densely, randomly, an eyeful of frenzied stars.
“Just try something,” David said. “Flash the headlights one time, on and off.”
What happened next was surreal. After our bright flash the field went black, and then, like a wave, a million lights flashed back at us in unison.
Whoa. To convince ourselves this was not a social hallucination, we did it again. And again. Hooting every time, so pleased were we with our antics. It’s a grand state of affairs, to fool a million brainless creatures all at the same time. After five or six rounds the fireflies seemed to figure out that we were not their god, or they lost their faith, or at any rate went back to their own blinky business.
David chuckled. “Country-kid fireworks.”

I don’t really know why, but for some reason “fooling a million brainless creatures all at the same time” made me think of PETA.