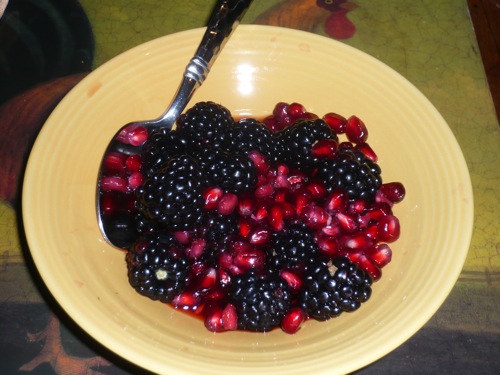 MD came through tonight with my all-time favorite dessert, which you can see in the above picture.  I would rather have this mixture of pomegranate seeds and blackberries than just about anything else.  Not only is it remarkably tasty, it is chock full of all kinds of phytonutrients and antioxidants.  And it tastes unbelievably good. I lust over very few desserts, but I truly do lust for this one.
MD’s secret is to put the seeds and the blackberries in the bowl, then douse the whole thing with Torani Sugar Free Black Cherry Syrup.  It makes for an unbelievable taste combination, yet few calories, and a ton of nutritional density.  When I ran the recipe through the USDA nutritional calculator, it comes out to contain about 12 grams of effective carb and around 100 kcal.  I’ll guarantee you that you won’t find a better, tastier, more nutritious use for 12 carbs anywhere else.
And it’s not all that expensive.  We got the whole thing at Costco.  They were selling large clamshells of huge blackberries for $4.99 each.  And package pomegranate arils for $6.99, which is practically a give-away price for these.  The twelve bucks we spent for these will give us about 8 desserts, which calculates out to about a dollar and a half for a dessert (maybe $1.75 if you include the Torani syrup) that is incomparable and would cost at least $6-$10 in a restaurant.
If you want to really soup this recipe up and make it even more elegant, you can add a little bit of a fortified red wine along with the Torani sugar free syrup.  And serve in in a nicer dish than our everyday china.
I encourage you to try it.  And let me know what you think.