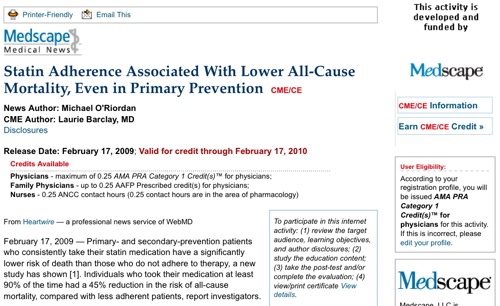 
So there is something about adherers to a drug regimen that promotes longevity as compared to non-adherers.
Getting back to our statin study, how do we know that the decreased risk of death in those who religiously stuck with their statin prescriptions as compared to those who didn’t came about because they were adherers and not because of the statins?  We don’t.  In fact, based on the two studies I detailed above, it’s much likelier that the decreased mortality in those who took all their statins came about not because of the statins, but because those who stuck with them are adherers and have what ever quality it is that adherers have that makes them live longer.  And, if this is the case in this study as in the others, the statins don’t really do anything at all.
Despite its not really proving that statins confer greater longevity, the study does provide some interesting admissions and entertaining confabulations.
First, the study authors admit that there is no gold standard, randomized controlled study data showing that statins are of benefit in preventing death except for one group of people (and they even get that wrong).

What they’re saying here is that statins have been shown to reduce mortality from heart disease in those who have elevated LDL, which is true.  But this decrease in deaths from heart disease is compensated for by an increase in deaths from cancer and other causes, so there really isn’t a gain.  You’re still dead.  Just maybe not from heart disease, but what difference does it make.  Are you going to spend $200 per month for the rest of your life and stay on medications that may make you feel lousy and lose your memory just so you can die of something other than heart disease?
In the last paragraph in the quote above, the authors confess that the data from actual randomized control trials show that statins confer no all-cause mortality benefits to women of any age and to men over 69.  They are playing a little fast and loose with the truth here because as I have posted before, the gold standard trials have shown no benefit for women and no benefit to men over 65 or to men under 65 who have never had heart disease.  The only improvement in all-cause mortality has been in men under 65 who have been diagnosed with heart disease, and even that benefit is so small that many people question if the extra cost and side effects of the statins are worth it.
So the authors of this study acknowledge that there has never been a randomized control trial that has shown any benefit to taking statins, but that doesn’t stop them.  They forge ahead trying to figure a reason that all these clinical trials haven’t shown an advantage.

Because clinical trials do not usually include individuals with multiple comorbid conditions or those receiving an extensive list of medications, there are considerable concerns regarding the applicability of findings from randomized clinical trials to the general population of patients seen in routine clinical practice.

Aha! They are saying that because the randomized controlled trial didn’t show what they wanted them to show – that statins worked for everyone all the time (thus the “considerable concerns”) –  that they need to figure out a better way to study them, one that involves patients with a lot of problems so that they don’t have to randomize them and confront failure yet again.

In light of the controversy surrounding lipid-lowering treatment for reduction of mortality among primary prevention populations, we undertook the present study to evaluate the effect of statin therapy in a large and diverse cohort of patients treated for dyslipidemia in a single health maintenance organization.

Interesting take.  There is no controversy.  The randomized controlled studies clearly show very little benefit to statin therapy in terms of decreasing all-cause mortality, the one statistic that really counts.  The controversy arises because the statinators simply don’t want to believe what these carefully performed trials tell them.  They by God want statins to work.  And they’re going to keep looking and fiddling with the data until they get a study that tells them what they want to hear whether the data is valid or not.
It’s pitiful that they are so desperate.
Don’t fall for the false promise of this or any other version of an observational study.  These kinds of studies do not prove causality.  Nor do they prove that a drug regimen works.  The patients in this study who religiously took their statins had better all-cause mortality than those who didn’t.  But, as we saw above, adherers always have better all-cause mortality than non-adherers.  In this case, was it that the adherers lived longer or was it that statins conferred some sort of benefit.  We can’t tell.  But we do know that in the real studies, the randomized control trials, statins didn’t do squat, so my vote would be that what we’re seeing here is an adherer effect and not a statin effect.
My advice is to continue to regard statins with a jaundiced eye.  So far, we haven’t seen any evidence that justifies the expense and the side effects of these drugs.