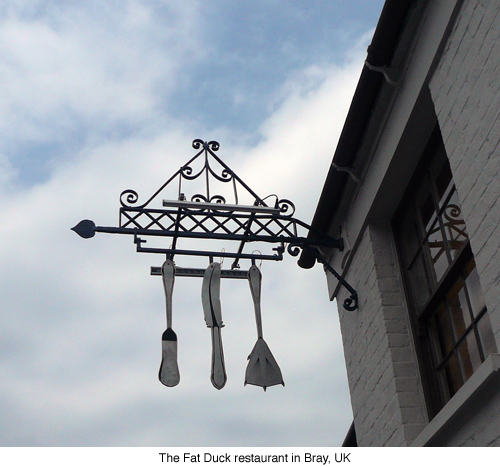 When we were in London a few weeks ago we met for an hour or so with Heston Blumenthal, who treated us to a four hour lunch at his famous restaurant, the Fat Duck. The meal was unlike anything we had ever had anywhere, and it shows why the Fat Duck has won the Best Restaurant in the World honors for a couple of years running.

I’ve intended to post on this fabulous meal, but haven’t yet because of the time it would take to describe everything.  I took photographs of every course, and if I included them all in one post, it would probably take a half an hour just to download it.

An article in the Telegraph, the UK’s most widely read newspaper, last week gave me an idea as to how to do the post on the meal.  I’ll divide it into multiple posts whenever something comes up that inspires a description of one of the courses.  Since all of the courses at the Fat Duck are of a theme, this won’t be too difficult.

The Telegraph article is about Heston’s new Alice and Wonderland menu.  We tried one of the entrees from this new menu while we were there, so that’s what I’ll post about this go round.

This particular entree, Mock Turtle Soup, was inspired by the Mad Hatter’s tea party and the Queen of Hearts in Alice’s Adventures in Wonderland.

In Victorian times turtle soup became the rage.  It was prepared from turtle meat imported from the Orient and was unaffordable by all but the very wealthy.  Less well-to-do households had to resort to an ersatz version made from the head, hooves, tail and other non-muscular parts of the calf in place of the turtle meat and called, appropriately enough, Mock Turtle Soup.

Lewis Carroll took advantage of this substitution in his book, creating a beast called the Mock Turtle.

Then the Queen left off, quite out of breath, and said to Alice, “Have you seen the Mock Turtle yet?”

“It’s the thing Mock Turtle Soup is made from, ” said the Queen.

Heston Blumenthal used these lines for his jumping off point in developing his own version of Mock Turtle Soup, but he added another twist, still from the same book.  During the Mad Hatter’s tea party the March Hare dips the Hatter’s pocket watch into his tea.

The Hatter was the first to break the silence.  “What day of the month is it?” he said, turning to Alice: he had taken his watch out of his pocket, and was looking at it uneasily, shaking it every now and then, and holding it to his ear.

Alice considered a little, and then said “The fourth.”

“Two days wrong!” sighed the Hatter. “I told you butter wouldn’t suit the works!” he added looking angrily at the March Hare.

“It was the best butter,” the March Hare meekly replied.

“Yes, but some crumbs must have got in as well,” the Hatter grumbled: “you shouldn’t have put it in with the bread-knife.”

The March Hare took the watch and looked at it gloomily: then he dipped it into his cup of tea… 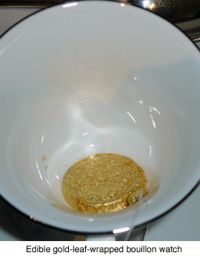 The presentation of the entree begins when a server puts down a cup containing a sort of a tea bag shaped as a gold pocket watch.  Then a teapot filled with hot water was placed next to each of us.  As with all entrees at the Fat Duck, this one is accompanied by an explanation of how Heston was inspired by the Mad Hatter’s tea party to create this piece of the menu.

The gold fob watch is molded of a kind of gelatinized bouillon (composed of beef and mushroom stocks reduced into a syrup, leaf gelatine and 10-year-old Madeira) hand-wrapped with edible gold leaf.  When we poured the hot water into the cup and onto the watch, it dissolves into a delicious, savory consomme with flecks of the gold leaf swirling about. 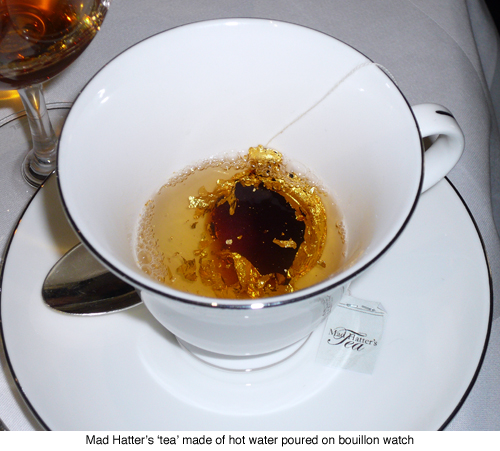 Once the tea is made, the server brings a large white bowl with the makings of a caterpillar arranged on the bottom.  The striped body of the caterpillar is made of terrine of ox tongue cooked sous vide compressed with slices of Lardo.  The mock turtle egg is made of a puree of turnip and swede with little enoki mushrooms sticking out to represent antennae so that the egg doubles as the head of the caterpillar as well as to call up an image of the toadstool on which he sat, smoking his hookah.  Sprinkled about the terrine and the mock egg are small cubes of pickled cucumber, truffles, and turnip brunoise. 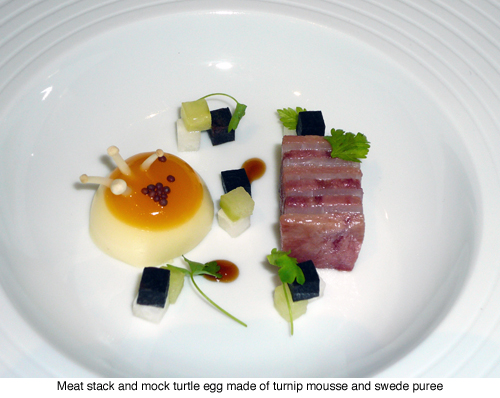 The server then invites the guest to pour the ‘tea’ into the bowl over the above ingredients to make the Mock Turtle Soup.  The entire entree then is a dazzling soup shot through with flakes of edible gold. 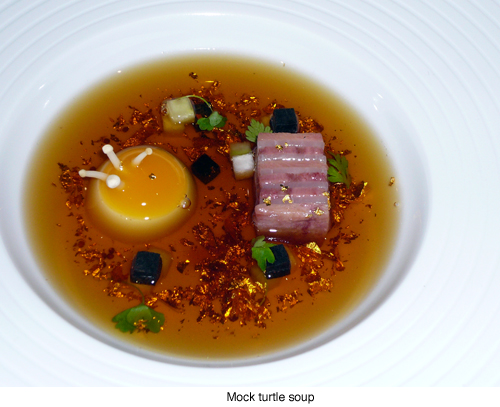 All that’s left now is to eat it, which we did with relish.  As you might imagine, it was delicious.  What you might not realize, however, is all the work that goes into this single entree.  Here is the recipe in full.  As one of the commenters wrote:

I think it’d be a lot less hassle for me to fly to London and go to his restaurant than to try to make this at home.

After looking over the recipe, I would tend to agree.