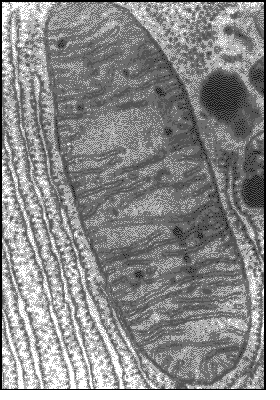 The subtitle of this post could just as easily have been: Feed your mitochondria right.
The two videos below pretty much tell the whole sad tale of doctors and nutrition.  Taken together, they confirm the widespread notion that doctors, in general, know very little about nutrition and seem to be proud to keep it that way.
This first video has made the rounds on the internet.  I’ve had it sent to me or recommended to me a dozen times, but I had never watched it until just a few days ago.  I was put off because of its length, which, at a little over 17 minutes, seems like an eternity in internet viewing time.  But I hope anyone reading this post doesn’t make the mistake I did and avoid watching because of the length.  It is a spectacular talk given by Dr. Terry Wahls, a female physician who was struck down by multiple sclerosis (MS), a relentlessly progressive neurodegenerative disorder.  She describes how she was able to restore her health by revamping her diet in in a way designed to properly feed her mitochondria.*  The transformation is almost unbelievable, especially considering the disease she was battling.  If you haven’t already seen this video – watch it.  I guarantee you’ll be glad you did.  And while you watch, pay careful attention to what her diet doesn’t contain much of.
[youtube]http://www.youtube.com/watch?v=KLjgBLwH3Wc[/youtube]
After you’ve seen the above video, take a look at the one below.  It is a little over 2 minutes long and was developed to give doctors – who, for the most part, don’t give a flip about diet – advice they can pass along to their obese or overweight patients.  Watching the longer video above first will give you more context to better appreciate the one below and show you just how lame mainstream medicine can be.
This video came from Medscape, a subscription service for doctors to keep them abreast of all the latest and greatest news and updates from the world of mainstream medicine.
[youtube]http://www.youtube.com/watch?v=Uk3V-VLOAc0[/youtube]
Pitiful, isn’t it?
Links:
The Medscape article containing this video.  (Although Medscape is a free subscription service for physicians, non-physicians can sign up as well.  For free.  Register if you would like to see the article, which is nothing more than a transcript of the video above.)  It is amazing to me that an online newsletter designed for physicians would regurgitate dietary information from a newsweekly and pass it off as serious medical information.  Especially in such a condescending and patronizing way.  The whole thing is infuriating.
The list of the 22 nutritional ‘experts’ who came up with the dietary rankings mentioned.
The US News and World Report article that inspired the video.
Power, Sex and Suicide  A pretty thorough book on mitochondrial function that is accessible to the non-scientist.  I read this book 6 or 8 years ago and learned a fair amount about mitochondrial DNA.  I had been interested in the issue of mitochondrial rehab for a while, and this book filled in some, but not all, of the blanks.  A good place to start if you’re interested.
Why Are Cells Powered by Proton Gradients?  Full text of a paper written by Nick Lane, the author of the above book, discussing how mitochondria work by creating an energy gradient across the inner membrane.  Accessible to non scientists.
Source of photo of mitochondria at top of post.
* Mitochondria are the little sausage-shaped organelles inside the cells that convert the energy stored in food to ATP, the energy currency of the body. I think the idea of correctly feeding mitochondria is an important one.  If your mitochondria don’t work well, you don’t work well.  I’ve got a couple of posts in the works on this subject of just what does keep the mitochondria fit and what happens when they become unfit.  And what it takes to rehab them if broken.  Based on my own pretty extensive review of the scientific literature over the past few years coupled with my clinical experience, I have a few minor quibbles with Dr. Wahls’ notions of what constitutes a perfect diet for the mitochondria, but I’ve got to say that her results speak for themselves.  I just think her diet could be even better with a little judicious tweaking.