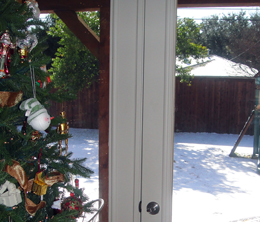 A quick post just to let everyone know that Im still among the living and that I havent given up posting for good.

MD and I have taken off a few days and are in Dallas with kids and grandkids celebrating Christmas.  It snowed like crazy all yesterday afternoon, and, according to the newspapers, Dallas has had its first white Christmas since 1926.  And we were here to witness it.  At left is a photo looking out the back door.  Granted, it’s not a New England eight inch snow or a Colorado two foot snow, but it’s a pretty substantial snow for Dallas.  Maybe its a harbinger of good things to come, although the last white Christmas preceded the year in which the Great Depression started.

Ive been absent from posting because MD and I have been incredibly busy with Sous Vide Supreme stuff.  I just thought we were busy during the developmental stage.  The post-developmental era has consumed enormous amounts of our time.  Especially since our invention had such a nice write up in the New York Times a couple of weeks ago.  Weve been inundated with requests for interviews from multiple media sources and for write ups for this and that.  And all that is not to mention a weeks worth of filming in Seattle.  Were making a true infomercial on the Sous Vide Supreme with emphasis on the info part.  So many people are unaware of what the sous vide process is, so were going to tell them.

Weve teamed up with chef Richard Blais, whom many of you may know from Top Chef, Iron Chef America and other TV cooking shows.  He couldnt be any nicer nor any easier to work with – a really great guy who can cook like you wouldnt believe.  He will appear with MD on the infomercial that will start running early next year.  Below is a photo of the two of them camping it up on the set. 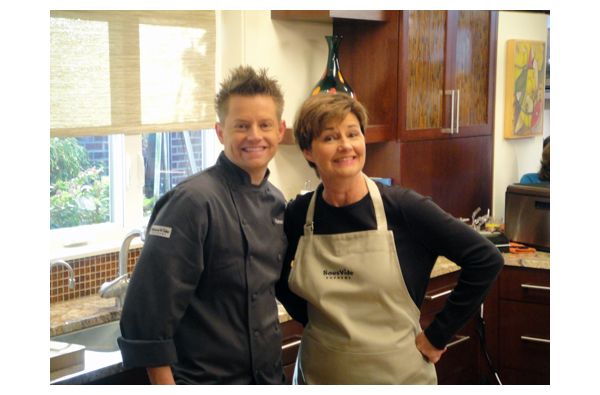 The infomercial filming went without a hitch, and the food that Richard Blais prepared in the SVS was incomparable.  On the eve of the filming my brother sent me a YouTube of an infomercial that had a few problems.  I forwarded it on to the rest of the team, and fortunately the Sous Vide Supreme functioned a little better than the popcorn popper in the video below.

Weve also teamed up with the retailer Sur La Table.  They will be carrying the Sous Vide Supreme in their stores and in their catalog right after the start of the year.  MD and Richard will be doing demos in several of the stores, so if you want to see the SVS in the flesh, so to speak, head on over to a Sur La Table near you and take a look.

This entire sous vide experience has been different than anything weve ever done.  Its really nice to see articles and reviews that are all positive instead of the hatchet jobs were used to getting while promoting low-carb.  No one accuses us of being purveyors of dangerous fad diets, of encouraging people to eat more artery-clogging saturated fat, of being doctors of death (which weve been called on live radio) or of simply trying to make a quick buck at the expense of the health of those gullible enough to follow our recommendations.  The new experience has been rewarding and a lot of fun but incredibly time consuming.  Thus my absence from my blogging duties.

But Ive been absent in electrons only.  Ive been flying all over the place carrying a satchel of scientific papers that Ive been reviewing and preparing to blog about.  So Im fully loaded with ammo and ready to write after Ive taken a fews days of a breather.

I haven’t been totally offline, however.  I’ve been keeping up with the blogs I  read regularly and haven’t been able to resist commenting when something gets under my skin.

Food writer Michael Ruhlman did a great review of the Sous Vide Supreme, and in the comments section someone took me (and the SVS team) to task for profiteering.   As you might imagine, this kind of thing really gets my hackles up, especially since we are still way, way in the red on this project.  I kept myself in check (the good Mike won out as MD would say) and wrote a couple of mild  but informative comments.  You can read them here.

My friend Amy Alkon, the Advice Goddess, whose blog I read religiously, wrote a funny post on bacon featuring the kind of ill-disciplined child who gives the South a bad name.  Amy, who is an inveterate low-carber, wrote the post from the perspective of how much she likes bacon.  Of course some commenter couldn’t resist slamming low-carb diets in general and Gary Taubes in particular, so I couldn’t resist resorting to form (the bad Mike sort of won out on this one).  If you’re interested, you can read that exchange here (two comments). The guy turned out to be pretty nice and even sent me a friendly email via Amy.

Speaking of Gary Taubes… he tipped me off on an interesting paper on HDL that I’ll post on soon and Ive uncovered a few others on the fallacy of the lipid hypothesis.  It looks like the mainstream is ratcheting up its jihad against low-carb again with a few spurious papers badly in need of a public dismantling.  Ill soon be tanned, rested and ready to shred.  And to go after the statinators, the great medical menaces of our time.  Plus Ill throw in a nice post on how long it might take the low-carb diet to become the diet recognized by all as the correct diet for most everyone.

Until then, Im going to lay low and try to catch up on my non-scientific reading.  Speaking of which, I got a great book as a Christmas present from my grandkids today.  It is Fly by Wire: The Geese, the Glide, the Miracle on the Hudson and is about US Air Flight 5149 that went into the Hudson River last January.  Although the book extols the skill and courage of Capt Sullenberger and crew, its main emphasis is on the aircraft they flew: the Airbus 320.

Twenty five years before Flight 1549 took its plunge, a highly intelligent, charismatic French fighter pilot and test pilot named Bernard Ziegler talked the management at Airbus to let him design a plane that almost flew itself.  Ziegler recognized that pilots exhibited a bell-shaped curve in their level of skill and expertise and that some of the less skilled had ended up killing themselves along with all their passengers after getting into situations that more skilled pilots may have gotten out of safely.  He wanted to design a plane with layers of built-in redundancies that would allow all pilots, but especially those less skilled, to worry about the major goal of any pilot who is in trouble – getting safely on the ground – without  being distracted by all the little details of flying.  In other words – and in very simplistic words – if pilots could simply make the decision to land, the plane could almost fly itself.  When pilots get in tricky situations it is sometimes difficult to get out of them without stressing the plane to the point of structural damage.  As the pilots are trying to avoid disaster they have to worry not only about their main problem – a loss of power, say – but have to baby the plane to keep it from breaking up.  Ziegler fixed all that with the Airbus by designing it to perform maximally under control of multiple computers while the pilots tend to the main problem at hand.  Since the computers control these functions of the plane by electricity its called flying by the wire.

When Sully and crew brought the plane down safely in the Hudson, they were flying by wire.  And as the author William Langewiesche puts it

They had no choice.  Like it or not, Ziegler reached out across the years and cradled them all the way to the water. His assistance may have been unnecessary, given the special qualities of these particular two [the pilots of Flight 1549], but there is no question the practical effects were profound.  At the moment of the bird strike, when the engines lost thrust, a conventional airplane would have tried immediately to nose down.  It would have wanted to go into a sharp descent, and would have required whoever was flying to haul back on the controls with some strength and to retrim the airplane for a slower, more moderate glide, while disciplining the wings to stay level until the decision could be made to turn around.  None of this is inherently difficult, but it imposes insidious demands on the crew in an emergency, when they are already busy with more important concerns.  It is an accepted reality that the repetitive and menial jobs, associated with baseline control subtly impinge on a pilots capacities, and that during periods of truly high workloads, even simple thoughts are difficult to have.

Imagine trying to disarm a bomb while also having to deal with menial chores and talk on the phone at the same time.

This fascinating book doesnt detract from the skill and heroism of the crew of Flight 1549, but explains in detail why they were able to make it look so easy.

I loved this book.  I opened it in the morning and had it finished before lunch (lunch was sous vide turkey, if you must know).  If you have any interest in aviation, Fly by Wire is a must read.  Despite the fact that the author dissects in detail a number of commercial aviation disasters in the recent past, the book actually makes one feel safer flying, especially in an Airbus 320.

This post is already longer than I had intended it to be, so I wish you all a Merry Christmas.  Ill be back soon.

I’ll leave you with a couple more photos.  Below on the left is my Southern grandson testing the snow barefooted.  On the right is MD slicing the sous vide turkey we had for lunch. 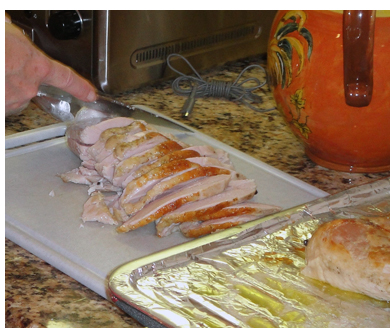 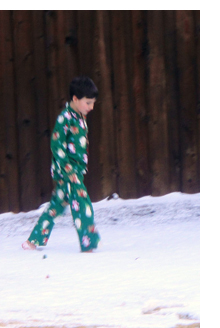