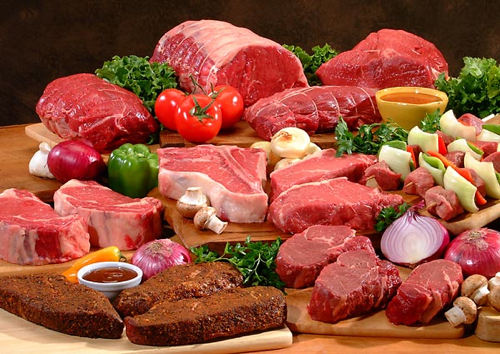 The news is abuzz with reports of the latest study to come out showing that eating meat, especially red meat, kills us off before our time.  (You can read some of the reporting here, here, here and here.)  Google shows 547 new articles about this study.
Although this study is totally worthless from a causality perspective because it is an observational study, it does serve to confirm the biases of those non-critical thinkers who have already bought into the idea that meat is bad.  To give you an example of such a soft thinker, here is the second comment on the blog post about this study in the New York Times.

I could have told you that 30 years ago. I been a vegetarian for 47 years and I have never seen vegetarians die from heart disease or cancer. They died from basic infectious diseases and malnutrition. Make no mistake it is harder to be a vegetarian than a carnivour but your body does not expel everying [sic] that is in the meat especially red meat.
Red meat is the major culprin [sic] in colon cancer. I actually know people who have colon cancer gene that only eat a no red meat diet and have no issues with their colon. Of course they also do not smoke or drink too much alcohol.
Red meat lobby is very powerful in America – Let them pay for this!

Ah, yes, an enlightened cogitator indeed.
The study published in the Archives of Internal Medicine (free full text here) is a typical epidemiological or observational study.  The reports have it tarted up with a lot of fancy clothes, but it is really nothing but an observational study.  And, as we’ve gone over ad nauseum in these pages, observational studies can’t be used to prove causation.
Even if they could, this study would be questionable at best because the relative risk (RR) is slightly over 1.0.  Because of the nature of the difficulty in doing these kinds of studies with any kind of accuracy it takes a RR of over at least 2.0 to get the serious attention of anyone who doesn’t have a built-in bias.
What I found more interesting than this study (which isn’t interesting or important at all) was the press coverage of it.  And I found especially interesting that which the press didn’t report.
Scientific journals have a couple of ways of getting their articles out there ahead of publication, so that the press can do stories on them.  If it works out right, the reports all hit the media on the same day that the article itself is published.  Doctors who read the journal often find out in their morning newspaper about a new paper before they even get their journal in the mail later that same day.  Many of the larger journals, Archives of Internal Medicine, for example, will issue press releases the week before on those papers coming out that the editors feel are important.  These press releases go to anyone with press credentials (I even get them), and are embargoed until the date of publication of the journal.  Reporters get advanced copies of the papers and get the editor’s (and maybe even the author’s) take on the paper.  Journalists can then write their stories to be timed with publication of the paper.
Another way followed by a number of journals is to publish papers online in advance of their actual publication date.  Reporters troll these advanced online articles looking for material for stories and often write them up for publication before the paper in question makes it into actual publication in the journal.
At the same time that this paper appeared, showing increased red meat consumption to be tied to a slight increased risk of death (and showing that those subjects eating white meat had less risk), a couple of other papers came out in the online pre-publication section of the American Journal of Clinical Nutrition (AJCN), arguably the world’s most prestigious nutritional scientific journal.  These two AJCN papers saw the light of day at around the same time as this highly-publicized study on meat and mortality, but demonstrated the opposite results.  They got no press coverage whatsoever.  Which proves what I’ve been saying all along: the press is biased against meat in general, and especially against red meat.  Knowing this, careful readers should take anything negative thing the media reports about red meat with an enormous grain of salt.
Let’s look at the other two studies published in AJCN.
The first is titled Meta-analysis of animal fat or animal protein intake and colorectal cancer.  One of the constant themes anti meat people like to hammer out is that meat intake, especially red meat intake, causes colon or colorectal cancer.  This is heard so often that most people take it for granted, assuming that there must be a ton of research backing it up.  As this paper points out, there isn’t.

This paper goes on to discuss how the hypothesis that fat and meat intake are a bad thing healthwise got kicked off way back in the 1960s from a presentation at a symposium. In shades of Ancel Keys and his discredited Seven Countries Study, a researcher named Ernst Wynder used the international food and cancer mortality data to demonstrate an increase in colorectal cancer as a correlate of increasing oil and fat consumption.  The hypothesis, although never proven, has been with us since.  The authors of this paper set out to study it once again.
Here is what they did:

To clarify the potential association between animal fat intake and colorectal cancer, we conducted a meta-analysis of prospective cohort studies in which data for animal fat were available.  In addition, we identified case-control studies that reported results for animal fat intake and combined data from these studies with the prospective cohort data in separate analyses.  Because the primary macronutrients in the consumption of animals include protein and fat, we also conducted a separate meta-analysis of prospective cohort studies in which data categorized as animal protein or meat were available.

After sifting through all this data, what did the authors find?  Absolutely nothing.  No correlation between meat and/or fat intake and colorectal cancer.

On the basis of the results of this quantitative assessment, the available epidemiologic evidence does not appear to support an independent association between animal fat intake or animal protein intake and colorectal cancer.

Like the study above showing the slight correlation between red meat intake and decreased longevity, this study is an observational study, and, as such, doesn’t demonstrate any kind of definitive proof.  But what I find galling is that the meat and mortality study hit all the airwaves and this study – made available to the media at the same time – received zero press.
Yet another study in the advanced online section of AJCN titled Mortality in British vegetarians: results from the European Prospective Investigation in Cancer and Nutrition (EPIC-Oxford) shows that things ain’t always as they seem.  Yet the press refuses to pick up and report this man-bites-dog story.
If you ask the man on the street (who has been fed a load of bunkum over the years by the press) if vegetarians or non-vegetarians are healthier and live longer, you will almost assuredly be told that vegetarians are the healthiest.  Most people believe this, but they just don’t want to make the sacrifice to follow the vegetarian lifestyle.  They are willing to give up a couple of years of life to not have to live on a steady diet of beans, tofu, vegetables, fruits and dry bread.  You would think that if a study came out from a prestigious institution (Oxford) published in a top-line scientific journal showing that vegetarians don’t live any longer than non-vegetarians and actually have a higher incidence of some particularly nasty cancers (but slightly lower rates of death from heart disease) it would be newsworthy.  But the press has totally ignored this study just like they did the last one.
This vegetarian study was interesting on a couple of levels.  Not only did it not show a difference in longevity between vegetarians and nonvegetarians, it showed major increases in longevity just from being in the study.  Not long ago I wrote a post about a statin study in which I discussed the adherer verses the non-adherer effect.  A number of studies have shown that subjects who take all their medicines as directed – even the placebos – live longer and/or do better than those who takes their medications irregularly.  There is something about people who go the extra mile that makes them live longer than those who don’t.
In this Oxford University vegetarian study, vegetarian subjects were recruited by all sorts of methods.  Those in the study cast out their nets for other vegetarians and recruitment was done through all kinds of advertising venues.  Those accepted into the study -both vegetarians and non vegetarians – had to jump through a fair number of hoops to get accepted and stay in the study.  And to stay in the study for the ten plus years that it went on.  After the study period, the numbers of deaths in the two groups was tallied, and it was found that vegetarians didn’t live any longer than non-vegetarians.  As a percentage, the number of deaths in each group was the same.
What’s more interesting to me, however, is the difference between the rate of deaths in both the vegetarian and non-vegetarian subjects as compared to their neighbors who weren’t in the study.  The researchers calculated the standard mortality ratios (SMRs) for vegetarians and non-vegetarians from deaths before the age of 90 years old as compared to the mortality rate for non-study subjects living in the same area.

In other words, if the observed number of deaths in the study group had been three quarters of that expected in a similar population from the area, the SMR would have been 75 percent.  And would have been a striking finding to boot.  It would have meant that just being in the study reduced one’s risk of death.
When all the data was tallied, the SMR for all causes of death among study subjects was only 52 percent, and was identical in vegetarians and nonvegetarians!  It didn’t matter if you were a vegetarian or a nonvegetarian, as long as you were in this study you were about half as likely to die as your neighbor who wasn’t in the study.  Now that’s an adherer effect in spades.  And I would think pretty newsworthy.  But, like the study above on meat and colorectal cancer, it was completely ignored by the press.
The point of this post is that you shouldn’t get wound up about a study that gets reported throughout the media because there are more than likely other studies that are just as well done and just as important showing exactly the opposite findings that the press chooses to ignore.  You’re not seeing the science as it is, you’re seeing the science as the press wants you to see it, which, typically, is the way that confirms the bias of members of the press.
As a journalist friend of ours once remarked:  what is news?  News is whatever the reporter decides it is.  In my opinion, they decided wrongly in this case.