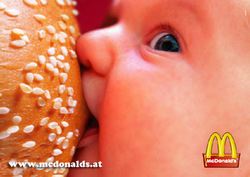 If you don’t think McDonald’s branding works – at least with young children – read on.
Researchers at Stanford studied 63 children aged from 3.5 to 5.4 years to see if these kids would prefer foods that came in McDonald’s packaging. The children were presented with identical McDonald’s foods in either a plain wrapper or in a wrapper with the McDonald’s logo, then asked which one tasted better.

As you might imagine the majority of the kids described the foods presented with the McDonald’s wrappers as tasting the best even though there was no difference in the actual food. Even the carrots – which are not a McDonald’s item – were more appealing to the children when associated with a McDonald’s wrapper.
Here’s how the test shook out:

When the researchers drilled down a little deeper into the data they discovered significant correlations between number of televisions in the household (a reasonable measure of TV watching time), the number of trips to McDonald’s and the kid’s preference for foods labeled as McDonald’s.
Here are those statistics in graphic form: 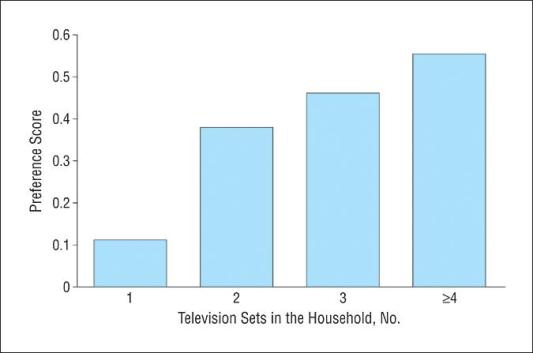 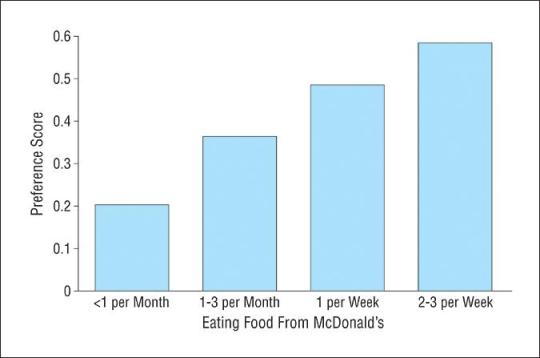 As you can see there is a kind of dose-response relationship for this data, which is the strongest kind of this type of relationship.
According to this paper the food and beverage industry spends $10 billion each year advertising to our children. This study shows that this advertising – at least as done by McDonald’s – works. Even for little bitty kids who aren’t even school aged.
The New York Times did a piece on this study a few days ago. The reported got a response from McDonald’s:

Walt Riker, a McDonald’s vice president, said in an e-mail message that “this is an important study and McDonald’s has been actively addressing it for quite some time.

I’ll bet they’ve been addressing it for some time. I imagine they addressed it with high fives all through the marketing department.
Mr. Riker continues:

In fact, McDonald’s own ‘branding’ of milk, apples, salads, and other fruits and vegetables has directly resulted in major increases in the purchases of these menu items by moms, families and children.

This is, of course, corporate speak for we’re doing the right thing. Next time you go into a McDonald’s, see how many kids are eating the fruits, salads, and vegetables (other than fries, of course).
It’s a tough battle with kids to get them to eat right. It’s especially a tough battle when tired, overworked moms and dads have to go head to head with $10 billion worth of marketing. But it’s got to be done if we want to bring up healthy, non-obese, non-insulin-resistant kids. I worry about the long term effects of this kind of marketing.
Once when I was about five years old I went up on a Ferris wheel all by myself at a carnival that came to the little town where I grew up. It scared the absolute bejesus out of me. To this day I still don’t like Ferris Wheels and break a sweat whenever I end up going on one. It’s not the height because I fly and have skydived and climbed rocks and done all kinds of things that I probably wouldn’t have done had I been afraid of heights. It’s because the fear was burned into me at a critical time in my development. At about the same time all these kids are getting imprinted with the idea that McDonald’s and all the other junk pushed by that $1o billion in ad money is good. Those ideas will stick with these kids for many, many years. It’s a real shame.