While cruising around one of my favorite websites I found a link to the following flow chart for the scientific method. 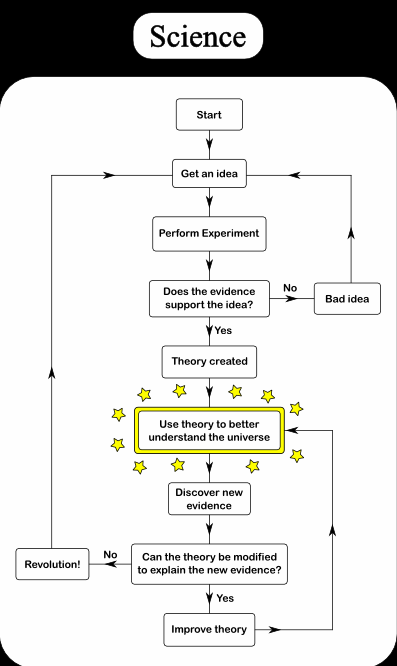 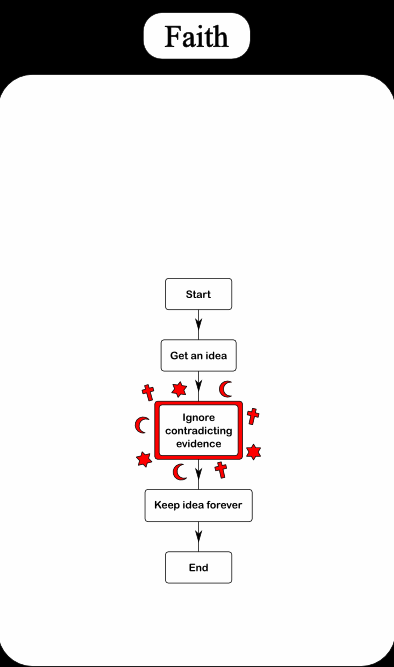 Notice the difference?
Now, think low-fat. In the old days (i.e. 6 or 8 years ago) whenever anyone made the claim that low-carb diets worked better than low-fat diets in helping people lose weight, drop blood pressure, stabilize blood sugar, alter lipid levels in a good way, eliminate GERD, get rid of sleep apnea, etc., all the low-fatters would sneer, ‘Yeah, show us the papers.’ Well, now dozens and dozens of papers have been published showing all the above. In every single paper that has been published (at least all the ones I’ve seen; if someone out there has one showing different, send it my way) comparing low-carb diets head to head against low-fat diets, the low-fat diet has at the very best held the contest even, at the very worst had its brains beaten out. If you average the results of all these studies, the victor by a large margin is the low-carb diet.
All the low-fat zealots who hang in out there continuing to come up with ad-hoc hypotheses to explain the failures of their own nutritional hypothesis are ignoring contradictory evidence, which as the chart above demonstrates is the hallmark of faith or religion.
And we all know what it’s like to argue about religion with someone who believes differently than we.
Because low-fat is a religion, I fear that it will take a long, long time for low-carb to become the dominant diet in America, although by all evidence it should.
Incidentally, while prowling through the guy’s website who came up with these charts, I read some of his journal, which is worthwhile reading. He is an American who grew up in the eastern part of the country but who now lives much of the time in Europe. He decided to take a solo journey by car through the heartland of America just to see what it was like. His journal of his trip is fascinating, especially the segment about the never ending fields of corn.
Here is a taste:

As the darkness grew, the rolling sea of corn took on a disquieting feel. In that black, any horror could leap out of the fields and drag me off into the endlessness of it all. The only spaces in the corn opened onto lonely farms. These were no better. Without lights they looked sinister, with lights they illuminated sharp, torturous machines. While my cerebral cortex recognized that salt-of-the-earth folk certainly lived within those occasional dwellings and not the cinema-style crazy, isolated and murderous hicks I imagined, my reptilian brain feared the worst. That, and the dark forms by the side of the road my tired eyes conjured for me, didn’t induce me to step from the warm safety of the car. The children of the corn waited out there.
Then, a beacon in the darkness: a single gas station in a clearing where US-20 intersected with an even more deserted looking road. I pulled over, tired buttocks, empty gas tank and full bladder greatly relieved.
But — oh good god — the bugs.
The light from this isolated outpost of civilization attracted every flying thing with compound eyes for a hundred mile radius.
Unbelieving, I took out my camera and tried to snap a few photos to capture the essence of it. When I show these photos now to gentle Englishmen, they assume the station is undergoing a blizzard. Only when I inform them that it’s actually bugs, do they drop the photograph in horror and revulsion.
I stepped inside the gas station, brushing the insects off my clothes and out of my hair, nostrils and mouth. Inside I beheld two fat, ugly people: one behind the counter, a woman, and the other a man. I stood for a moment, waiting for a break in their low, conversation about God’s gift of corn and its varied uses. Long moments went by before the fat man took notice of me.
“Oh,” he said to the fat woman, “you better take care of him, he’s a…” and then trailed off, failing to finish the sentence.
`A what?’ I dearly wanted to know but, before I could ask, the woman turned to me suspiciously.
“Saw you taking pictures out there,” she said. She had a round head, lacking in facial features, like a baby, except with pimples.
“Yes,” I said. “I’m a photographer,” I lied.
Her pimply face betrayed no understanding of my words, so I continued the lie. “I’m from London on a road trip to photograph America.” Well, not exactly a lie, but very close and vastly overemphasizing my importance. I tried to give the impression of one who works for the BBC with purpose, instead of a lost, dumb tourist on a road not meant for tourists.
“You’re at a gas station,” she said, as though this structure’s purpose would be unknown to one from England. “What you photographing here?”
“Well,” I said, gesturing to the vast blizzard (not-a-blizzard-oh-the-horror) of crawling, flying things outside the window. “The bugs.”
“You came all this way to photograph the bugs?”
She misunderstood me, thinking that I had intentionally journeyed to US-20 after hearing legendary stories of the bugs along it and the great gas station to which they swarm.
“But there are bugs around all gas stations” she continued.
“But not like that,” I said.
The pimples on her forehead came together in a way to indicate to me that she was furrowing her brow.
“All gas stations have bugs,” she said, then added for clarification: “at night anyways.”
To her, it seemed that the island of light in the middle of corn may well have been the only point of brightness in the Universe. I imagined her father telling her, as a little girl, creation myths of a world of endless corn with only their town at the center, the way primitive island people imagine there to be nothing but water beyond their shores.
“Well,” I said, not sure how to continue, “it’s the most impressive bug storm I’ve ever seen.”
The fat man took this moment to give his companion a knowing glance, and they resumed their previous corn-based conversation as though I wasn’t there. I paid for my gas and left.

The entire piece is funny and illuminating. I especially enjoyed his tour of the Mitchell Corn Palace somewhere in South Dakota replete with audio recording of the tour guide. And reading of his travel through this part of the country makes one realize just how much corn there is and why there is such a compulsion to put it in everything.