Once again the dishonesty or maybe sheer stupidity of scientists bowls me over. I got an email from an old patient a couple of days ago who is following a low-carb diet while under the care of a skeptical (to say the least) cardiologist. The cardiologist sent the patient an email with a link to a Cardiosource (an online resource for cardiologists) commentary on an article in this month’s issue of the Journal of the American College of Cardiology.
The paper compared a standard high-carbohydrate, low-fat diet (HCLF) to a very-low-carbohydrate, high-fat diet (VLCHF) in terms of blood lipid changes. The Cardiosource commentary seized on the last two lines in the abstract of the paper.

…although both diets had similar improvements for a number of metabolic risk markers, the HCLF diet had more favorable effects on the blood lipid profile. This suggests that the potential long-term health effects of high- and low-carbohydrate weight loss diets remain a concern, and that blood lipid levels should be monitored in obese subjects with the metabolic syndrome.

As the commentator put in in his perspective:

The best diet for the metabolic syndrome is neither of these extremes. Rather, the best is a diet restricted in processed flour and simple carbohydrates, increased in complex carbohydrates and soluble fiber, and high in fish and monounsaturated fats. The results also support patient choice, with careful monitoring of the lipids. Of course, aerobic exercise and weight training should improve the outcome of any diet.

Jesus wept. Nothing in this paper leads to the Cardiosource guy’s pinheaded conclusion. In fact, nothing in this paper leads to the conclusion of the authors of the paper, at least not as they wrote it in the abstract.
Let’s take a look at what the data in the paper show and see how, once again, academic bias rears its ugly head.
A group of 88 abdominally obese subjects were randomized into two equal groups. One group went on a low-calorie HCLF diet; the other went on a VLCHF diet of the same number of calories. Both groups remained on their respective diets for 24 weeks. Researchers measured various blood parameters at the start and at the end of the 24 week trial.
Both groups lost a similar amount of weight over the 24 weeks (subjects on the low-carb diet were trending toward a greater weight loss, bt the difference hadn’t reached significance by 24 weeks). You can see in Table 3 below the results of any lipid changes in both groups over the 24 weeks. 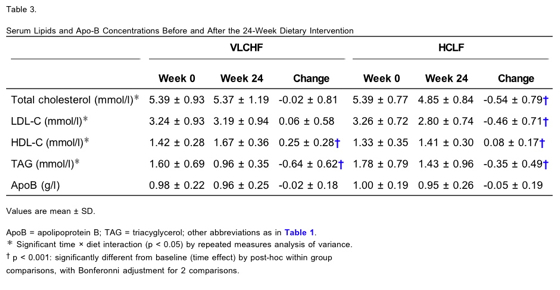 Most of us here in the US are used to seeing these numbers listed in units of mg/dl instead of the mmol/l that are appearing more and more commonly in scientific papers. I converted the mmol/l units into the more familiar units and put them in the table below.

Let’s analyze to see what all this means.
First, we can see that total and LDL- cholesterol didn’t do much on the low-carb diet whereas both dropped on the low-fat diet. This is nothing that hasn’t been seen a thousand times before in other studies. It’s been known forever that reducing fat in the diet brings about a reduction in total and LDL- cholesterol. But it does so at a cost. The cost is that although the LDL-cholesterol level falls, the particles themselves convert to the smaller, denser type that are more atherogenic. Nothing new here – this has been known for a decade or more. More about this in a moment.
Second, the HDL-cholesterol went up by almost 20 percent and the triglycerides dropped by over 40 percent on the low-carb diet. These same values changed but slightly in those on the low-fat diet.
In my opinion (and the opinion of many others) the lipid parameters of most value in determining risk for heart disease are triglyceride levels and HDL levels. In fact an important index of risk is the triglyceride to HDL ratio (TGL/HDL): the lower the better. Looking at the data from this study we see that for the VLCHF diet the TGL/HDL dropped from 2.6 to 1.3. It halved. In those subjects following the HCLF diet the TGL/HDL dropped from 3.0 to 2.3, substantially less. (Now, these kinds of things matter if you’re a real believer in the lipid hypothesis, which, as everyone should know by now, I’m not. If you’re not a believer you think that these figures are markers for something else going on that probably causes heart disease, but are not the causative forces themselves.)
So, we’ve got a situation here where the lipid parameters improved more on the low-carb diet as compared to the low-fat diet, yet we’ve got the authors of the article, the generators of this data, telling us that the HCLF diet had “more favorable effects on the blood lipid profile.” Unbelievable.
But wait, it gets worse.
If you look at the first Table 3 above, you’ll see a category called ApoB at the very bottom. You’ll also notice that apoB didn’t change much in either group. But that is significant. Why? Because it means that the LDL-cholesterol particles really did get smaller in the HCLF group. Let me explain.
Cholesterol is a waxy substance that doesn’t dissolve in water or in blood. The waxiness of cholesterol is what makes it so important for providing structural support for the cells membranes and other fatty acid bilayers, but it’s also what keeps it from dissolving. In order for cholesterol to be ‘dissolved’ in the blood it must be attached to a protein, which will dissolve and carry the cholesterol along with it. Depending upon the protein it’s attached to and its density cholesterol becomes LDL or HDL or VLDL. One of the specific proteins making up LDL is called apoB. There is an apoB for each LDL particle (the particle is composed of the protein, some cholesterol and some triglycerides).
If we know the apoB count we can estimate the number of LDL particles. If the apoB number goes up, there are more; if it goes down, there are fewer.
Since the LDL-cholesterol measurement tells us how much LDL-cholesterol we have and the apoB measurement tells us how many particles we have, we can divide the LDL-cholesterol by the apoB number and get a rough estimate of the size of the LDL-cholesterol particles.
If we look at our two groups of subjects in this study, we find that in the VLCHF group the LDL-cholesterol didn’t change much and neither did the apoB. Therefore we can pretty much say that the diet didn’t really affect the LDL-cholesterol particle size. If we look at the HCLF group, however, we see a different picture. In the subjects following the low-fat diet LDL-cholesterol levels fell while apoB numbers stayed the same. This means that there are the same number of particles as before but they became smaller after 24 weeks of low-fat dieting. In other words, the low-fat diet converted the LDL-particles into the more dangerous smaller, denser type.
And these guys have the temerity to tell the world that low-carb dieting makes lipid numbers worse!
We could write it off to ignorance maybe. But not really. If you read the discussion part of the paper you will find the following statement:

It has been suggested [I would say it has been a whole lot more than suggested] that apoB, which represents the actual number of atherogenic lipoprotein particles, may be a more reliable indicator of CVD risk. Although there was some evidence for a reduction compared with baseline, apoB levels did not change significantly by week 24 in either group, suggesting that atherogenicity did not change despite a high or low saturated fat intake and the absence of an expected reduction in LDL-C with weight loss in the VLCHF.

Say what?
We know these folks know about LDL-cholesterol particle size and atherogenicity because they just described it. Then they go on to lay this smoke screen about there not being any change in particle size in those subjects on the low-carb diet. Duh! But they never mention the change in those on the low-fat diet. Unbelievable!
The disinformation presented in this paper goes to the very heart of the peer-review process. This paper wasn’t published in some low-rent journal – it was published in the Journal of the American College of Cardiology. A major journal. One assumes that the peers who reviewed this paper when it was submitted were cardiologists or at least scientists with more than a modicum of training in diseases of the heart. And one would assume that since these reviewers were cardiologists – almost all of whom are lipid-hypothesis moths of the deepest dye – they would be up on apoB and LDL-particle size and the putative atherogenicity of small, dense LDL-cholesterol particles. It beggars belief that a paper such as this one could make it through an intelligent peer-review process and wind up as it did in the pages of a major medical journal read by cardiologists all over the world.
Most of these cardiologists have their doubts about low-carb dieting, and, just as with the one who sent the email to my former patient, most will never read this paper critically, but will immediately use it as padding for their own anti-low-carb bias.
These are the kinds of shenanigans that go on all the time. They are the reason there is so much disinformation out there. And they are the reason that you should always be skeptical to the max whenever you hear this kind of idiocy bantered about. You must read the entire paper – not just the abstract.