During my Monday morning troll of the medical literature I came across a paper in Nutrition Research showing that a semi-sort-of low-carb diet improves lipid profiles significantly better than does a low-fat diet.
The researchers who performed this study are a tad more enlightened that the normal run-of-the-mill lot we typically find doing this sort of work in that these folks looked at the lipid parameters most likely to be valid, if the lipid hypothesis is ever proven: triglycerides, HDL-cholesterol (HDL), and the number of small, dense LDL-cholesterol (LDL) particles.
Before we get into the study results, I want to take a bit to go over the problems that bedevil anyone trying to study diet. Macronutrients – fat, protein and carbohydrate – exert numerous effects on metabolism. And so do calories. The problem is in determining which of these variables causes the effect in question. If we place two groups of subjects on differing diets, one on a low-carb, high-fat diet and the other on a low-fat, high-carb diet, and we keep the calories the same in both groups, and we find that those subjects on the low-carb diet reduce their triglycerides, what does that tell us. Most of us will conclude that the reduction in carbs brought about the effect. But did it? It could just as easily have been the increase in fat.
What if in an effort to determine what’s going on, we decided to keep the fat the same in both groups and keep the calories the same, but to raise the protein intake in the lower-carb diet? If we find the same effect – the lowering of triglycerides – we can say that it’s probably the reduction in carbs, but we can’t say for sure because it could be that the increase in protein did the trick.
So we say, okay, we’ll keep the both the fat and the protein the same in both diets and simply lower the carbs in one diet and keep them high in the other. We do this and find that the triglyceride levels do indeed fall in the lower-carb diet. So that means that cutting carbs reduces triglycerides, right? Maybe, but we still can’t say for sure. Why? Because if we keep protein and fat the same in both diets and reduce carb in one and add carb in the other we end up with fewer calories in the low-carb diet. Protein is the same in both, fat is the same in both; but carbs are lower in one than the other, making the low-carb diet lower in calories. People can then justifiably say that maybe it is the reduced calories in the low-carb diet reducing the triglycerides and not the lowered carbs.
These are just some of the problems that come from manipulating the macronutrients and calories. There are other problems as well. If we give subjects diets and tell them to follow them on their own, then the specter of underreporting is involved. If we put subjects in metabolic wards, the expense of the study increases exponentially. And, contrary to what some people think about metabolic wards, these are not lock-down units, but are simply beds in a hospital designated for the study. As often as not, subjects in metabolic ward studies are free to go to their jobs during the day or roam around the hospital at will and have visitors. Subjects cheat during metabolic ward studies, and are probably less prone to admit it than they are on free-living studies. All in all, it’s difficult to get good reliable data from any kind of diet study. So, we’ve got to live with what we can get and make the best judgments we can.
The study we’re considering today has it’s own kind of problems. First, there aren’t a lot of subjects in the study, so differences in findings have to be large in order to reach statistical significance. And these subjects were randomized onto different diets, which, on the surface, seems like a good thing, but it may not be. Why? Because compliance could become an issue. Each of us has our own food likes and dislikes as well as our own ideas of what constitutes a good, healthful diet. If I love carbohydrates and consume a diet that is primarily carbohydrate, then I’m unlikely to pick up a book on low-carb dieting, and probably even less likely to go on a low-carb diet unless I become really convinced that such a diet is better for me. Same goes for someone who eats a lot of meat, cheese, eggs and other higher-protein, higher-fat foods. That person is unlikely to go on a low-fat, high-carb diet unless he/she becomes convinced of the superiority of that diet, and even then it would be difficult. Now if I or this other person are simply randomized onto a diet we don’t really enjoy and have no real motivation to follow, how likely are we to adhere to it faithfully? Not very, I would imagine.
If we allow subjects to select their own diets, that throws another kind of bias into the study because the subjects weren’t randomized. I’m droning on about all this simply to show how difficult good nutritional studies are to do because of all the variables involved. And no matter how a study is done, someone can poke holes in it for one or more of the reasons I mentioned above.
In the study we’re looking at today 23 subjects were randomized onto one of two diets for eight weeks: a low-carbohydrate diet or a low-fat diet.
The low-carb diet:

The goal of this diet was to have 15% of energy from CHO, 20% to 30% of energy from protein, and the remaining portion as fat (55%-65%) with saturated fat intake less than 10% of energy. The proportion of energy as fat is typical for a carbohydrate-restricted dietary plan. Subjects were given guidelines to avoid alcohol and simple sugars; CHO-rich foods such as breads, cereals, rice, pasta muffins, chips, pretzels, and crackers; select vegetables (potatoes, corn, peas, and dried beans); dairy foods; fruits; and fruit juices. No specific targets were imposed for the monounsaturated and polyunsaturated fatty acid intake or total calories.

As you can see, the low-carb diet is not all that low-carb. Most rigid low-carb diets keep carbs in the 8 percent range, or about half of the 15 percent set for this low-carb diet.
In this study, calories were determined at the start. I have a little trouble believing the figures, which are 7095 ± 2520 kJ (calculates to 1695 ± 602 kcal) for the low-carb group and 7911 ± 3211 kJ (calculates to 1890 ± 767 kcal) for the low-fat group. This would mean that subjects randomized to the low-carb diet were on their normal diet consuming anywhere from 1093 to 2298 kcal and those randomized to low-fat were eating 1123 to 2657 kcal These are people who weighed in at around 200 pounds, so I find it unlikely that any of them were eating only 1093 kcal per day. In fact, I would bet that most of them were eating over 2700 kcal per day, so I don’t know where these figures came from. This brings up one of my real pet peeves. Why can’t researchers know when something doesn’t pass the smell test, and say, hey, wait a minute, something isn’t right here, then figure out what’s going on. So many of them simply enter the data without giving it a thought. Yeesh.
But, that misstep aside, I think we can pull some interesting data from this study. These subjects were given instruction in one of two diets, a handful of meal plans, and sent on their way for eight weeks. Despite each subject’s also receiving dietary instruction on an alternating weekly basis throughout the study (via telephone, I assume), these people were regular people trying to follow a diet, much like people who buy diet books. It’s cheering to learn that even doing it this loosy goosey, not-very-controlled, way that the subjects on the low-carb diet did better in terms of their lipid changes.
Here is Table 2 from the study: 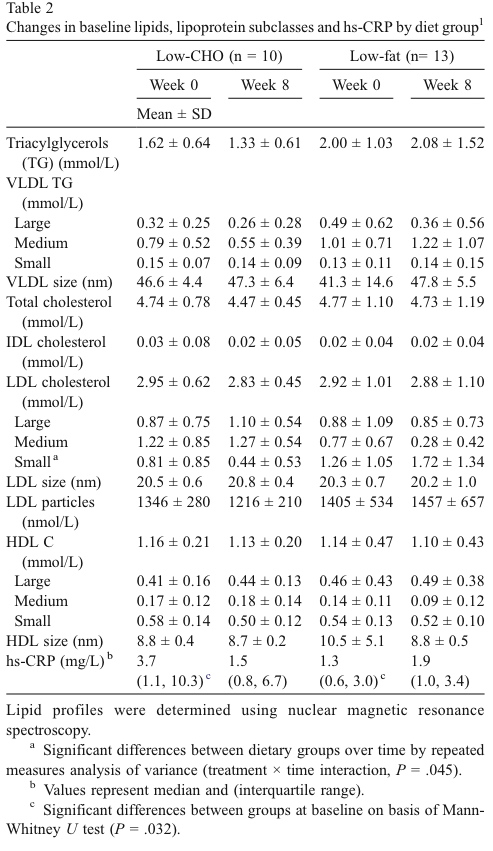 If you live in the United States, these numbers won’t make much sense to you because they are in mmol/l, which is a measurement used everywhere but the US. To convert to mg/dl, the US system, multiply the triglyceride values by 89 and the LDL and HLD values by 39.
It’s interesting to note that these subjects had triglyceride levels and LDL levels before starting the two diets that were not elevated by any means. The low-carb group had starting triglycerides of 144 mg/dl and starting LDL levels of 115 mg/dl. The low-fat group had triglycerides of 178 mg/dl and LDL of 114 mg/dl. Even lipophobic physicians wouldn’t consider these values as worrisome.
After eight weeks, the subjects on the low-carb diet saw their concentrations on small, dense LDL particles fall by almost half whereas those on the low-fat diet watched theirs rise from 49 mg/dl to 67 mg/dl, a 37 percent increase. If any single lipid parameter truly corresponds to a real risk for the development of heart disease, it is this one. And it’s nice to learn that a less-than-rigid low-carb diet – even if followed loosely by people who aren’t all that motivated – halves it. Just think what would happen if these subjects really dug in and followed a more rigid low-carb diet. And these subjects didn’t have bad numbers to begin with. Imagine what might have happened had they had elevated levels of small, dense LDL particles.
Don’t ask me why, but these researchers, for whatever reason, chose to limit the saturated fat on the low-carb diet to less than 10 percent of calories. I suspect that if the saturated fat intake had been higher, we would have seen an even more pronounced lowering of the small, dense LDL. I guess even somewhat enlightened researchers just can’t bring themselves to recommend saturated fat, even for a short-term study.
As you can see from Table 2, C-reactive protein (a measure of total body inflammatory load) was substantially lowered in the low-carb group while it increased in the low-fat group. But the figures didn’t reach statistical significance due to the small number of subjects, so we can’t really make a claim here. But it does give us the tantalizing hope that were this group of subjects larger, we would have seen the same difference. I would bet money that we would.
So, we have yet one more study to add to our growing pile showing the superiority of the low-carb diet for all sorts of good things. In this case, the improvement of the atherogenic lipoprotein profile. Use it the next time someone hits you with the old ‘that diet is clogging your arteries’ nonsense.