Low-carb battles in your brain

I’m going to toss off a question about the paradoxical nature of low-carb diets.  Here is the set up.  Most people reading this post will have – at some point, at least – enjoyed the benefits of a low-carb diet.  They will have had more energy, slept better, rid themselves of heartburn and GERD, stabilized blood sugar, reduced blood pressure, normalized lipids and lost weight.  Many will have been able to rid themselves of one or even a handful of drugs.  All will have felt much, much better than before starting the diet.  And, if most are like me, will marvel on what a wonderfully filling and satisfying diet it is and will tell them selves that the low-carb diet is really the only diet worth following.
Okay, that’s the set up.  Here is the question:
Why are low-carb diets so difficult to stick to for so many who have had the above experience?
When I am in full low-carb mode, genesis-ing that neo glucose like crazy, I feel like a million bucks.  I’m not hungry, I don’t really obsess on food, and I have energy out the yang.  So, why would I ever go off the diet?  I can assure you that I do.  And sometimes I go off in a bad way for longer than I should.  I pick up a few pounds, finally get a grip on myself and plunge back into low-carbery.  When I’m back  sailing along, I wonder why I ever went off in the first place.  So, why did I do it?  Why do we all do it?
Here is what Don DeLillo writes in White Noise that is apropos to our question:

Who knows what I want to do?  Who knows what anyone wants to do?  How can you be sure about something like that?  Isn’t it all a question of brain chemistry, signals going back and forth, electrical energy in the cortex?  How do you know whether something is really what you want to do or just some kind of nerve impulse in the brain?  Some minor little activity takes place somewhere in this unimportant place on one of the brain hemispheres and suddenly I want to go to Montana or I don’t want to go to Montana. 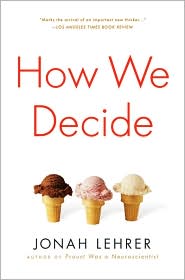 The above quote leads off  Jonah Lehrer’s new book How We Decide, which I’ve started, but haven’t finished.  I got the book because of an article of Lehrer’s I read in the Dallas paper when I was there a couple of weeks ago. So far, the book has met and exceeded all my expectations.  And tomorrow night, I’m going to meet the author, so I’d like to get most of the book finished by then.
The article in the Dallas paper got me thinking about diets, low-carb diets in particular.  And about how much easier it would be for all of us if a lot of things changed.  Before I go into detail, read this excerpt from the article:

A recent experiment…sheds light on what happens inside the brain when people make shopping decisions. While economists have long assumed that consumers are rational agents and purchase goods based on calculations of utility, that assumption turns out to be false. In reality, every shopping decision is an emotional tug-of-war, as the pleasure of getting something new competes with the pain of spending money.
The experiment went like this: A few dozen lucky undergraduates were given a generous amount of cash and offered the chance to buy dozens of different objects, from a digital voice recorder to gourmet chocolates to the latest Harry Potter book. While the students were making their shopping decisions, the scientists were imaging the activity inside their head with a powerful brain scanner.
They discovered that when subjects were first exposed to the item, a part of the brain called the nucleus accumbens (NAcc) was turned on. The NAcc is a crucial part of our dopamine reward pathway – it’s typically associated with things like sex, drugs and rock ‘n’ roll – and the intensity of its activation was a reflection of desire for the item. If the person already owned the complete Harry Potter collection, then the NAcc didn’t get too excited about the prospect of buying another copy. However, if he’d been craving a George Foreman grill, then the NAcc flooded the brain with dopamine whenever that item appeared.
But then came the price tag. When the subjects were exposed to the cost of the product, the insula was activated. The insula is associated with aversive feelings, and is triggered by things like nicotine withdrawal and pictures of people in pain. In general, we try to avoid anything that makes our insula excited. Apparently, this includes spending money.
By measuring the relative amount of activity in each brain region, the scientists could accurately predict the subjects’ shopping decisions. They knew which products people would buy before the people themselves did. If the insula’s negativity exceeded the positive feelings generated by the NAcc, then the subject almost always chose not to buy the item. However, if the NAcc was more active than the insula, the object proved irresistible. The sting of giving up cash couldn’t compete with the thrill of getting a George Foreman grill.

So far, nothing much new other than putting names to the parts of the brain – NAcc and insula – that constantly debate with one another over what we’re going to buy or do.  We think we make decisions rationally, but we really don’t.  We make them because our brain chemicals tell us what to do.  As I mentioned in a previous post, we can control this to a little better extent than Mr. Lehrer indicates that we can.
But this constant debate goes on in our brains, with our spendthrift hedonistic NAcc wanting to buy, buy, buy while our tightfisted, frugal, money-hoarding insula trying to hold the line.  That this debate occurs is not lost on retailers.  They want to do whatever they can to encourage the NAcc and discourage the insula.

…retail stores already manipulate this cortical setup. Just look at the interior of a Costco. It’s no accident that the most covetous items are put in the most prominent places. A row of high-definition televisions surrounds the entrance. The fancy jewelry, Rolex watches and other luxury items are conspicuously placed along the corridors with the heaviest foot traffic. And then there are the free samples of food, liberally distributed throughout the store.
The goal of these discount warehouses is to constantly prime the pleasure centers of the brain, to keep us lusting after things we don’t need. Even though we probably won’t buy the Rolex, just looking at the fancy watch makes us more likely to buy something else, since the coveted item activates the NAcc.
But it’s not enough to just excite our reward centers: Retailers must also inhibit the insula. This brain area is responsible for making sure we don’t spend excessively, and when it’s repeatedly assured by retail stores that low prices are “guaranteed,” it stops worrying so much about the price tag. In fact, researchers have found that even when a store puts a promotional sticker next to the price tag – something like “Bargain Buy!” or “Hot Deal!” – but doesn’t actually reduce the price, sales of the item will still dramatically increase.
These retail tactics lull our brain into buying more things, since the insula is pacified. (Paying with a credit card seems to have a similar effect. Because the actual payment is postponed until the end of the month, the insula doesn’t fully process the pain of spending money. Of course, this leads, over time, to rampant credit card debt.)