A while back MD and I went to see the German movie Lives of Others that recently garnered the Oscar for best foreign film (in fact, we saw the film the night before the 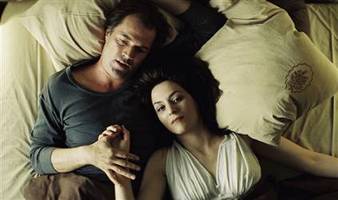 Oscars). I haven’t been able to get it out of my mind since.
Lives of Others is without a doubt the best movie I’ve seen in several years. I can’t recommend it highly enough. It is one of those movies that satisfies on multiple levels: one learns something of another culture, there is redemption, there is superb acting, and there is nail-biting suspense. It is the first film of a young German filmaker who conceived the entire premise after listening to a beautiful piece of music while doing his classwork. It is one of those brilliant movies that could never be made in America. In fact, anyone pitching the film in Hollywood would probably be thrown out on his ear.
The film revolves around a sort of menage de trois involving an East German playwright, his live-in girlfriend who happens to be the most famous stage actress in East Germany, and a nondescript bureaucrat bent on ruining anyone indulging in independent thinking. As the film makes clear, ruination at the hands of the East German government is a terminal event from which there is no chance of recovery.
Watching Lives of Others makes one realize how corrosive to the soul living in such a police state as East Germany must have been. No one knew who was spying on and informing on whom over what. Now that the files of the Stasi (the East German national police) are open, it has become a national pastime for people to pore through their files and find out who had been informing on them. Many long-term relationships have been destroyed over information contained in these files. This movie makes it easy to see how such things happened in the normal course of life there.
The movie made me think of F. A. Hayek’s The Road to Serfdom, a difficult to read but infinitely rewarding book. Hayek lays out the path most free countries take to ultimately enslave themselves. The East Germans were enslaved instantly by the partitioning of Germany after the second World War, but the end result was the same.
(If you’re not familiar with Hayek’s book, here is a link to a cartoon version that is really pretty good.)
It would be difficult to sit through this movie without realizing what a great deal we have here in the United States. Sure, as a country we’ve got our warts and all, but compared to how it could be (and compared to how it was in East Germany just a few years ago) it is nirvana. Lives of Others has made me appreciate my life and the freedoms that I take for granted immeasurably. Go see this film.
Here is an excerpt from the best review I’ve seen yet. Read the entire review here.

But even though The Lives of Others is set primarily in 1984, it’s not 1984. This is not a morality play about East Germany, or a fictional catalogue of the horrors of life under communism. It’s a character study in the guise of a stunning suspense thriller. When the rigorously correct Stasi man Wiesler begins to go off the reservation, it’s impossible to determine his motivation and therefore impossible to know what he’s going to do next, or why. As the playwright Dreyman begins to take creative and political risks for the first time in his life, his fate is entirely in Wiesler’s hands–and like the culture minister who started the investigation, Wiesler is besotted by the playwright’s beautiful and talented girlfriend.
Donnersmarck’s work is so fresh and so original in part because he is working with a great, rich, infinitely absorbing subject–a subject other filmmakers across the world continue to avoid like the plague. This is strange. Life under communism would seem to be among the least controversial topics one could imagine. After all, who outside of Vladimir Putin’s inner circle actually longs for a restoration of the Soviet Empire? But you can count on two hands and a foot the number of major motion pictures made since the dissolution of the Soviet Union that have attempted any kind of reckoning of the human cost of communism in the 20th century.
Among the cultural cognoscenti across the world, there seems to be a hunger to let this subject simply slide down the rabbit hole. Donnersmarck found it difficult to secure financing for The Lives of Others, which cost a negligible $2 million to make. And the organizers of the Berlin Film Festival refused to accept it as an official entry in 2006–a decision that, in sheer aesthetic terms, has to be reckoned among the most perverse I’ve ever heard about. Once released, it made a sensation in Germany and is among the most successful films ever released there. That’s not surprising. There are few German films since the fall of the Weimar Republic that come anywhere near The Lives of Others.