The drug rimonabant (Acomplia) that failed to pass muster with the FDA panel last week works by blocking some of the hunger receptors in the brain. In other words, those who take the drug – assuming it works as touted – will be less hungry. Less hunger means less food consumption. Less food consumption typically results in weight loss. So, if you take rimonabant, assuming you don’t become suicidal and do yourself in (the big worry of the FDA panel since the major side effects are varying degrees of psychoses), you should lose some weight. But there is a better, cheaper way.

The low-carbohydrate diet working through the hormone leptin reduces hunger much more than rimonabant on its best day. And without the risk of serious side effects. And without the $250 per month for the drug.

Before we get into the explanation as to how the low-carb diet works to reduce hunger, we need to define a couple of terms that may not be familiar to all: the blood brain barrier and leptin.

First, the blood brain barrier (BBB). The BBB is a ‘barrier’ between the exquisitely sensitive cells of the brain and any chemicals or harmful substances in the blood. This barrier is composed of tightly joined cells lining the capillaries that carry blood throughout the brain. The tight ‘packing’ of these cells prevents the passage of chemicals, drugs, and other substances that might have an adverse effect on the brain. Drugs made to work in the brain have to be structured in such a way as to permit their passage from the blood through the BBB into the brain.

Leptin is a hormone made by fat cells. When there are a lot of fat cells they secrete a lot of leptin. What does leptin do? It seems that every day a new function for leptin is postulated, but for our purposes now, let’s stick with what most scientists consider the primary function of leptin: regulation of the fat mass by regulating hunger.

Leptin acts almost like the gas gauge on a car. As you drive your car, sensors in the gas tank monitor the level of the gasoline (fuel) in the tank and send signals to a gauge on your dashboard. When the fuel gauge on your dashboard starts to signal that your tank is close to empty, you start looking for a gas station.

When your fat cells are full, they send a signal (leptin) to your brain that says, ‘Hey, we’re full, shut off the food.’ After a period of no eating because you’re not hungry, your fat cells start to get a little smaller. As they do, they produce less leptin. Less leptin hitting your brain tells it you need to fill up the fat cells, the brain responds by increasing your hunger. You eat, the fat cells fill up, they send more leptin, the brain shuts off your hunger.

That’s the way it works in a perfect world.

That’s the way it worked in our Paleolithic past.

But, unfortunately, that’s not always how it works now. If it did, no one would be obese. But, we’re in the throes of an obesity epidemic, so something is clearly wrong with this picture. Have all these obese people quit making leptin?

Before we go into the whys and wherefores of all this, I want to digress for a moment to show you just how potent leptin is. Let me start by telling you about how leptin was discovered. The discovery of leptin came about as the result of a search for the cause of obesity in a mutant strain of mice that had been around for years. By comparing these mice with normal mice, researchers at Rockefeller University isolated a substance they called leptin (from the Greek word meaning thin: leptos) as being a hormone that the obese mice were not producing. A mouse from this line, called an Ob mouse – or technically Ob/Ob, meaning that it lacks the leptin genes on both chromosomes – produces no leptin in its fat cells. As a consequence it never gets the ‘don’t eat’ signal, so it eats all the time and becomes obese. Hugely so. Way more than just a typical mouse that is over fed. In fact, here are some pictures to show you the magnitude of the obesity. 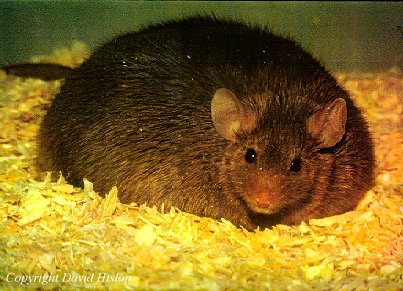 If you give these Ob mice leptin, they lose weight, or if you give it early enough, they don’t gain and are like their non-Ob mice brethren.

As you might imagine, this discovery caused quite a stir. For a brief moment everyone thought the magic bullet for obesity had been found. All we have to do is give fat folks leptin, and, Voila!, they get thin. Problem was that when researchers started checking, they discovered that obese people had plenty of leptin and that giving them more didn’t particularly help things. So another great weight-loss idea bit the dirt. But no one lost interest in leptin and there is still a huge amount of leptin research underway all over the world.

Leptin is an enormously powerful substance in the regulation of the size of the fat mass. Especially when it doesn’t exist. Just as there are Ob mice with no leptin, there are Ob people who make no leptin. These people get more and more obese to the point of grotesqueness, and, fortunately for them, the administration of leptin does indeed work to reduce their size.

To demonstrate the power of the lack of this hormone, I want to show you a video of a little girl whom I’m pretty sure is leptin deficient. Nothing much else could account for this situation. Maybe a pituitary tumor, but I doubt it. I don’t know if she is leptin deficient, but I would bet a fair amount of money that she is. In any case, this is what kids with a leptin deficiency look like.

As you can see, leptin is quite powerful, at least in its absence. It’s also powerful when present, but not in such dramatic fashion. When leptin is doing its job, the result is normalcy.

How does it all work to keep things normal?

Here is a graphic from a recent paper on leptin showing the leptin-feedback cycle in technical terms. Take a look, then we’ll go through it in non-technical terms.

The Arcuate Nucleus is a part of the hypothalamus, which is the part of the brain involved with appetite regulation.

The Leptin Receptor is the protein structure in the Arcuate Nucleus that leptin binds to allowing leptin to exert its effect.

The pinkish/red tube represents a capillary in the brain tightly packed with the epithelial cells making up the BBB.

Here’s how it all works:

The fat mass – the stored fat on the body – produces leptin, which is secreted into the blood in the circulatory system. When leptin reaches the capillaries (the tiniest blood vessels) in the brain, leptin makes its way across the BBB and into the fluid around the brain cells where it binds to the leptin receptors on the arcuate nucleus of the hypothalamus. The arcuate nucleus then sends signals to decrease food consumption and increase metabolic rate.

As the fat mass decreases in size -as it does when you don’t eat for a while and the stored fat is burned for energy – the amount of leptin in the circulation decreases as well. Less leptin crosses the BBB, less binds to the leptin receptors, and the arcuate nucleus sends out the ‘It’s time to eat’ signal. You eat and replenish the fat mass, leptin goes up, and the cycle starts again.

So as leptin levels wax and wane, so does your sense of hunger and even, to an extent, your metabolic rate.

Where does the low-carb diet fit into the picture?

Most obese people find themselves in this very situation: high blood levels of leptin but still hungry. And eating makes more fat, which makes more leptin, which should shut off the hunger response, but it doesn’t because the ever increasing levels of leptin telling the brain to tell the obese person to quit eating don’t get to the brain to do their job.

Research done a couple of years ago in St. Louis and in Japan pinpointed the problem. Triglycerides – fat circulating in the blood – interrupts the passage of leptin across the BBB. If trigylcerides are high, which they are in most obese people, then, basically, they block the movement of leptin into the brain. So, leptin levels are elevated in the blood, and triglycerides keep the leptin from getting to where it needs to get to shut off hunger. (click here for the abstract and full text of this research paper.)

So, the triglyceride reduction from following a low-carb diet does does double duty when more leptin gets to the brain: hunger goes down and metabolic rate goes up. That duo increases weight loss. Is it any wonder that low-carb diets virtually always manhandle low-fat diets in terms of weight loss in all of the studies in which they are compared? And it it any wonder that when people are allowed to eat an ad lib low-carb diet, they always consume fewer calories than those consuming an ad lib low-fat/high-carbohydrate diet?

Carbohydrates cause triglycerides to increase. All of Dr. Dean Ornish’s studies have shown that subjects following his ultra-low-fat/extremely-high-carbohydrate diet find their triglycerides screaming upward. It’s no wonder that most people have difficulty sticking on his diet or any low-fat/high-carb diet for very long without a lot of hand holding, behavioral therapy, meditation and the rest of his total program. People following these Ornish-like nutritional regimens are sabotaged by the elevated triglycerides that these diets cause. Consequently, they are always hungry. And sooner or later, they give in to their hunger.

Why spend $250 per month on a pill that has a high probability of producing untoward reactions to reduce hunger a little bit when you can simply convert to a low-carb diet and get a more substantial hunger reduction along with an increase in metabolism to boot?