Research published in the most recent issue of the Journal of the American College of Nutrition shows that a modest daily dose of krill oil markedly reduces inflammation and reduces the pain, stiffness and functional impairment associated with rheumatoid and osteoarthritis within one week.
I posted last summer on the regimen I had put together for my own golf-related aches and pains to replace the large doses of Advil (ibuprofen) I had been taking. In the same post I discussed a study published in Surgical Neurology showing that patients with severe back pain who opted to take fish oil instead of NSAIDS (Advil-like drugs) could, for the most part, achieve equivalent pain relief. This study was one in which the doctors gave a number of patients the option to switch from NSAIDs to fish oil, so the study wasn’t really hard science, but kind of soft science in that, as I wrote at the time, it was not a double-blind, placebo-controlled study.
Now, a Canadian researcher has published a very nice double-blind, placebo-controlled study using Neptune Krill Oil (NKO) that shows some pretty impressive results.
The paper begins with a discussion of krill and the oil derived from them.

Neptune Krill Oil is extracted from Antarctic Krill (Ephausia Superba), a zooplankton at the bottom of the food chain. Even though krill is the main food source for whales it remains the most abundant biomass on earth because of its high regeneration properties. The krill used for Neptune Krill Oil is harvested in the Antarctic Ocean where the worldwide harvest is less than 0.1% the allowed fishing quota. Being at the bottom of the food chain, having a very short lifespan of 1–2 years and living in the clean waters of the Antarctic Ocean, makes the krill and thus Neptune Krill Oil naturally pure of heavy metals, dioxins and pesticides.
The oil is extracted by a patented cold vacuum extraction process that protects the biomass from exposure to heat, light or oxygen. This protects the oil through-out its production and maintains the original nutrients of krill intact. The result is a concentrate of novel marine phospholipid carriers of eicosapentanoic (EPA) and docosahexanoic (DHA) fatty acids and potent antioxidants. The main antioxidants, astaxanthin and a novel flavonoid, similar to the 6,8-Di-C-glucosylluteolin, esterify the EPA and DHA respectively. This provides a significant stability and antioxidant potency to the oil.

The researcher who did this study wanted to see if NKO would not only reduce the symptoms of inflammation – pain, stiffness, and functional disability – but wanted to test a laboratory parameter of inflammation as well. She decided to use C-reactive protein (CRP) as her lab test to determine the degree of inflammation.

C-reactive protein (CRP), which is one of the most useful biomarkers of inflammation, appears to be a central player in the harmful effects of systemic inflammation and an easy and inexpensive screening test to assess inflammation-associated risk. Unlike other markers of inflammation, CRP levels are stable over long periods, have no diurnal variation and can be measured inexpensively.
Current studies suggest that CRP is a strong predictor of future cardiovascular events. At all levels of estimated 10-year risk for events according to the Framingham risk score and at all levels of LDL cholesterol, CRP remained a strong predictor of future cardiovascular risk. CRP has been shown in several prospective, nested case-control studies to be associated with an increased risk of myocardial infarction, stroke, sudden death from cardiac causes, and peripheral arterial disease.
In arthritic joints CRP production reflects the release of proinflammatory cytokines, such as interleukins-1 and -6 (IL-1 and IL-6) and tumor necrosis factor-alpha (TNF-{alpha}), which are essential in the mechanism of cartilage degeneration. CRP is significantly increased in patients with rheumatoid arthritis and slightly but significantly higher in patients with osteoarthritis than in matched controls.

Since most experts are now beginning to believe that heart disease is driven by inflammation (not cholesterol), anything that reduces CRP, the primary marker of inflammation that everyone now tests for, generates a lot of interest.
Subjects who had a diagnosis of cardiovascular disease and/or rheumatoid arthritis and/or oseoarthritis were recruited and randomized into two groups. These subjects had their CRP tests monitored for three weeks to make sure that the levels were stable before starting the study. At the start all completed the Western Ontario and McMaster Universities (WOMAC) arthritic pain assessment questionnaire, which is a standardized test used to quantify pain, stiffness and loss of function related to arthritis.
Subjects in the control arm got a placebo; those in the other arm got 300 mg of NKO each morning, a small dose. Most NKO softgels contain 500 mg of NKO. (My own regimen includes two gelcaps, giving me 1000 mg per day, over three times the amount taken by the study subjects.)
The subjects were tested for CRP and with the WOMAC at baseline, then at 7 days, 14 days and 30 days. The results were quite dramatic.
The published paper showed the data in tabular form, which is kind of difficult to read. I don’t know why they didn’t portray it graphically since that is so much more demonstrative, but they didn’t.
But I did. I took my trusty graph paper and red and blue markers and laid it out for you.
Here is the graph showing the dramatic decline in CRP levels in the subjects taking NKO compared to the controls. 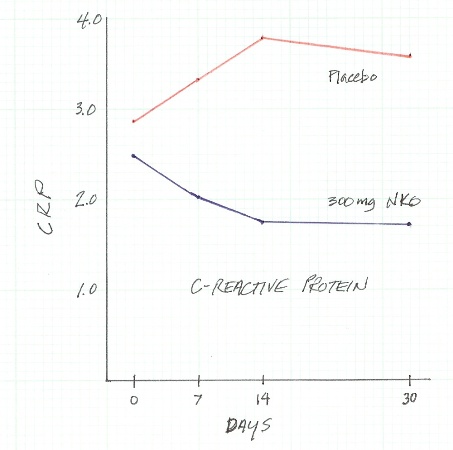 You will notice that in the controls, the CRP shot up at first, then stabilized. This is probably because the control subjects had been taking NSAIDs before this study started and the rise in CRP is a rebound effect. The subjects taking the NKO were also on NSAIDS prior to the study, which makes the rapid reduction in CRP they experienced even more dramatic.
Here is the graph showing the decrease in pain. 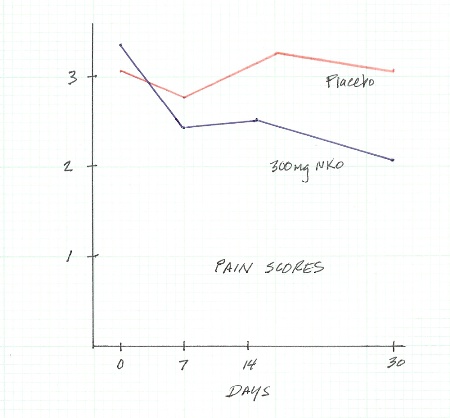 The decrease in functional impairment. The lower the line, the less impairment. 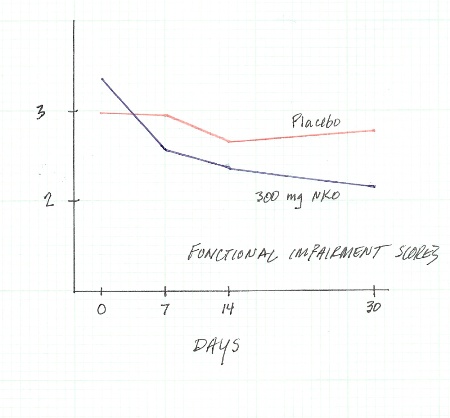 I didn’t do a graph on the decrease in stiffness because it mirrored the others.
It is apparent from this study that NKO in a modest dose markedly reduces inflammation very quickly. In fact, the most significant changes were within the first week. In tandem with this striking decrease in CRP, a marker of inflammation, the actual symptoms of inflammation were reduced in a similar fashion.
Do these remarkable improvements come about because of the EPA and DHA in the NKO or because of the astaxanthin or the phospholipid structure or all of the above? No one really knows right now, but based on this study, it’s pretty clear that something in NKO is doing the job.
As reported by the author:

The results of the present study validate the potent anti-inflammatory properties of NKO and reinforce the potential mechanism of action. The CRP reduction induced by NKO demonstrates that NKO is a safe and effective alternative for the treatment of inflammation, particularly with all the recently proven adverse events of the most widely used NSAIDs. Furthermore, this study demonstrates a significant improvement in all 3 WOMAC scores among the 30 and 10 patients on NKO as compared to the 26 and 12 patients on placebo who were diagnosed with osteoarthritis and rheumatoid arthritis. No adverse events were reported making NKO safe for human consumption.

In my view I think it would be a much better strategy to put everyone on one NKO softgel per day than a statin. But that’s just me.