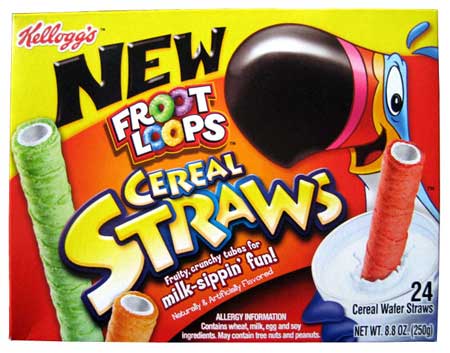 A few months back I posted on how the Kellogg Company had been elevated into the pantheon of the “world’s most ethical companies,’ at least according to Ethisphere Magazine, a rag dedicated to rating such things. I noted at the time that I thought it strange that a company devoted to the provisioning of children with sugar-laden junk foods of one sort or another would be deemed ‘ethical’ by anyone. In my view it was kind of like saying the Gestapo were ethical because they took good care of their employees.
A month or so after I posted my comments the New York Times came out with a piece about how the Kellogg Company was trying to clean up its act by stopping its television advertising many of its most sugar and crap laden products to children.

The Kellogg Company said yesterday that it would phase out advertising its products to children under age 12 unless the foods meet specific nutrition guidelines for calories, sugar, fat and sodium.
Kellogg also announced that it would stop using licensed characters or branded toys to promote foods unless the products meet the nutrition guidelines.
The voluntary changes, which will be put in place over the next year and a half, will apply to about half of the products that Kellogg currently markets to children worldwide, including Froot Loops and Apple Jacks cereals and Pop-Tarts.

As the article goes on it becomes clear that the folks at Kellogg’s are not making these changes out of the milk of human kindness nor even from some kind of sense of responsibility or concern about the health of the nation’s youth, but out of fear of lawsuits. In fact the Kellogg Company made the changes to thwart a lawsuit that was in the process of being filed.
What nutritional guidelines is Kellogg adhering to as its cutoff for selling products to kids? 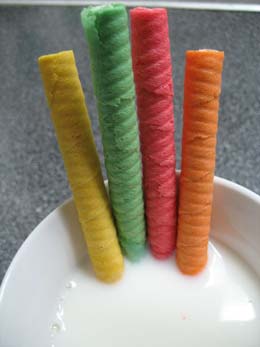 Now let’s take a look at what our friends at Kellogg’s have done with this. They’ve come up with Froot Loops Cereal Straws. It’s not enough that kids eat bowl after bowl of nasty, sugar-filled cereal, the Kellogg Company wants them to suck their milk through sugary straws coated with icing that they can eat after the milk is gone. The idea is that drinking through these straws makes the milk taste like that left in the bottom of the bowl after all the Froot Loops cereal is eaten. Mmm, mmm. We just can’t give the little buggers enough sugar.
Take a look at what these lovely little straws are made of:

And when we take a look at the Nutrition Facts for these babies we find that a serving is 3 straws and contains 12 grams of sugar, 2 grams of saturated fat, and fewer than 230 grams of sodium in 140 calories. Looks suspiciously close to me to the limits of the self-imposed (or, more accurately, the fear of lawsuits imposed) nutritional guidelines.
I couldn’t bring myself to spring for the small amount it would take to buy these, but I found a couple of people who did.
This reviewer wasn’t all that impressed:

Upon perforating one of the two packages, the perfume of fake fruit and powdered milk permeated the air and tempted the taste buds (try to say that without sounding like Daffy Duck, I dare you). There’s something about unabashedly artificial flavoring that’s both charming and nostalgic…sexual, even. Alright, maybe not sexual, but something pleasant nonetheless. The straws were thinner than what the box indicated, looking more like real straws than giant-sized novelty pens [How many kids will stop at just 3, the single serving size?]. They are lined in the middle with that sickly sweet powdered milk that seems to be popping up in granola and cereal bars everywhere. Someone needs to tell these guys that it does NOT replace milk and that we can all tell it’s just sweetened coffee creamer. Fortunately, the flavor of that is masked by the Froot Loop shell.
The straws themselves are rather sturdy and hold up well to milk. They last a long time without getting soggy and do actually work as straws. They basically taste like Froot Loops, which is all you could realistically hope for. Sadly, the cereal straws live in a paradoxical existence; humans cannot eat and drink at the same time. Well…I guess soup makes us do that, but let’s ignore that for a second.
Once you take a single bite of the cereal straw, it becomes too short for drinking and the fun immediately dissipates. If you just sit there and drink the milk, you’ll just be wasting the straw as it imparts no flavor and is generally useless. Once you get to the bottom, you realize you have a half-soggy cereal straw with no milk to wash it down with.

Here’s another reviewer who even shows them on a video. He is late adolescent/early adult so we can get more of a kid’s eye view from him:

Froot Loops Cereal Straws are so damn good. Screw the milk. They’re just like wafer cookies with the frosting in the middle! I even got creative and decided to suck some Monster M-80 with one since they’re all citrus flavored (color means nothing they’re all the same flavor really) and it was actually pretty damn good!

And to complete the picture, here is Kellogg’s website ad for these straws. As you can see, it is designed not only for children but for their parents with the message that Froot Loops Cereal Straws will encourage your kids to drink more milk. What goes unmentioned, however, is the metabolic effect of the 3 teaspoons of sugar (12 grams) in the 3 straws. When you consider that most kids probably eat a bowl or two of sweetened cereal along with their glass of milk, you realize that they are more often than not consuming somewhere in the neighborhood of 16-20 teaspoons (about a quarter of a cup) of pure sugar to start their mornings. Is it any wonder that childhood obesity is running rampant.
Thanks, Kellogg, for caring so much about our kids.