Kellogg…one of the worlds most 'ethical' companies? 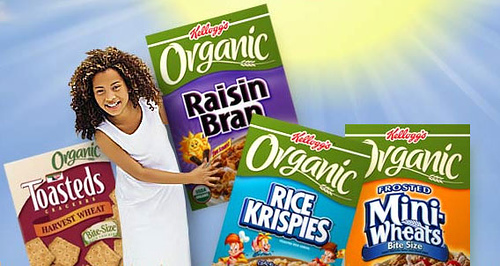 Ethisphere Magazine, a “national publication dedicated to illuminating the important correlation between ethics and profit,” recently named the Kellogg Company as one of the World’s Most Ethical Companies, making Kellogg one of

the elite list of companies [that] were recognized for their strong leadership in ethics and compliance, advancement of industry discourse on social and ethical issues, and positive engagement in the communities in which they operate.

Ethical? Hmmm.
Let’s take a look at what the Kellogg Company produces:

In searching through this list, I can’t find a single product that is actually healthful. In fact all, of them are dreadful. They are all what are referred to euphemistically as ‘convenience foods.’ I think a more accurate description would be junk foods.
I would venture to say that virtually every product Kellogg makes is a health destroyer. Which figures, since the company was founded by the brother of the vile charlatan John Harvey Kellogg (an action causing a breech in their relationship that was never repaired), whose sanitarium brought many, many of its patients to grief. As Hank Williams, Jr. sings, “It’s an ol’ family tradition.”
(If you want to read an entertaining and informative fictional treatment of J.H. Kellogg and his ilk, get a copy of the fabulously well-written The Road to Wellville and devour it. You may think that all the treatments and theories discussed in the book are fictional, but I can assure you they are not. Everything from Fletcherizing, to radiation treatment, to yogurt enemas, to major surgeries for non-existent bowel disorders, to womb manipulation took place as described. And don’t bother renting the movie–it sucks and has very little correlation to the book. On another note regarding womb manipulation…a little known fact of medical history is that up until the first part of the 20th century a large part of the time spent by many physicians in their practices was devoted to bringing their female patients to orgasm. Strange but true. If there is enough interest in learning more about this bizarre branch of medical practice, I’ll enlarge on the topic in a future post.)
What does make a company ethical? Is it how it treats its employees? Is it how it treats its customers? Is it how it treats the environment? (You can read Ethisphere Magazine’s selection process here under ‘Methodology.’)
If a company treats its employees wonderfully, is terrific to its customers, and is environmentally friendly, yet sells a toxic product that kills, is it still an ethical company? How about the tobacco companies? Are they ethical if they treat employees, customers, and the environment well?

I would posit that the Kellogg Company is worse than the tobacco companies. At present the tobacco companies promote their products to consenting adults who should know better. I know that these companies have subtle ways of getting their message out to kids that it’s cool to smoke, but the cereal and ‘convenience food’ manufacturers advertise directly to children. Their products are designed to be children-friendly and have cartoon characters on the boxes. Yet they’re filled with trans fats and high-fructose corn syrup, not anyone’s idea of a great diet for kids.
Maybe if the tobacco companies ditched the Marlboro Man and other such adult icons and instead labeled their products with pictures of the Keebler elves, they, too, would get a nomination to the list of the World’s Most Ethical Companies.