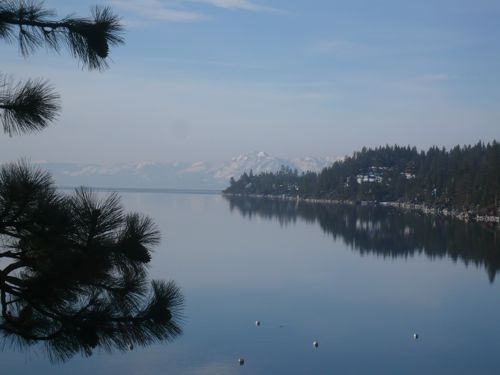 It looks as though the fire has pretty much been contained.  After several days of high winds, low humidity and brutal temperatures (up to 100° F), Santa Barbara late spring weather has reasserted itself.  We woke up yesterday (after a fairly sleepless night, what with a big red glow looming over the horizon) to cool, foggy weather.  The flames we could see leaping up the night before from the canyon above us, were completely obscured by the fog.

As one of the fire officials said in a welcome respite from ‘incidentese’, “Now we can chase the fire instead of having the fire chase us.”  Which looks like what has happened.  They have chased it and beaten it down. Most people are back into their homes, including those evacuees who were bunking in with us and got the word they could go back home at 10 AM today. We and our house escaped unscathed.  Not even a cinder or ash so far.

As I was transferring my fire photos from my camera to iPhoto, I realized I hadn’t transferred the photos I took a couple of weeks ago when we were in Tahoe.  It was nice to see some peaceful pictures without fire and smoke in them.  The one above is the view from my office window looking across the lake toward Squaw Valley just a little after daybreak.  That’s the time I love to get up, grab a hot cup of Americano, and start into my reading before the phone starts ringing.  If MD didn’t have a big concert coming up in a couple of weeks, that’s where we would be now.  And would stay at least until all this fire cleanup is finished.  It would be nice to be able to sleep without one eye on the skyline and an ear open listening for the wind.

MD and I thank you all for your good thoughts, prayers and well wishes during these frightening times.  I hope we don’t have to go through anything like this for a good long time – if ever.  Twice in six months is a little much.

A Happy Mother’s Day to all you moms out there!  MD was treated to brunch today by a couple of our kids and our granddaughter.  I went along to provide the color commentary.