Over the past few weeks I’ve taken some heat in the comments section for my writing that weight loss or weight gain involves more than a simple accounting for calories. The entirety of mainstream medicine and nutrition believe that calories are the only thing that counts and that a low-carb diet is nothing more than a clever way to get people to cut calories. Weight loss on low-carb diets, so they say, occurs only because subjects following low-carb diets reduce their caloric intake. A calorie is a calorie is a calorie they say. But is it?

I could argue that this idea isn’t necessarily true because of a number of recent studies that have shown that subjects following low-carb diets actually lose more weight than their counterparts on low-fat, high carb diets despite the fact that the low-carbers consumed considerably more calories. But instead of going through these modern day studies, let’s go back and look at a couple of earlier famous studies to see what we can learn.

In 1944 Ancel Keys, Ph.D., decided to undertake a long-term study of starvation. It was apparent that WWII was going to be over soon and that much of Europe was starving. Although word of the mass starvation in concentration camps was just starting to filter out into the world, it was well known the Europeans, especially Eastern European, were not getting enough food. Keys wanted to do a study of starvation to see what really happened during the process so that at war’s end the victors would have a better idea of how to deal with the starving masses they were sure to encounter.

Key’s recruited 36 young male volunteers from the cadre of the conscientious objectors. These were healthy, normal weight men, most of whom were working for the Civilian Public Service (CPS), an entity created to provide jobs of national importance for conscientious objectors. The men responded to brochures and bulletins distributed in the various CPS barracks showing a photo of three French toddlers staring at empty bowls over the question: WILL YOU STARVE SO THAT THEY WILL BE BETTER FED?

The subjects came to the University of Minnesota where they were housed in the cavernous area underneath the football stadium for the course of the study. They were basically kept under lock and key for the study so that Keys and his colleagues could ensure compliance. At the start of the experiment the men were fed sumptuously for the first 12 weeks.

A full-time cook, two assistants and a dietitian monitored the food intake to the smallest fraction.

According to The Great Starvation Experiment**, an excellent book about this famous study, during this lead-in phase the men ate well. A typical days food would include

a typical lunch… [that] consisted of fricasseed lamb with gravy, peas, and a carrot and raisin salad. For dinner…the men ate roast beef with gravy, whipped potatoes, tomato salad, and ice cream for dessert.

Although the three meals per day the men received added up to around 3,200 calories, which they were told approximated the normal American diet, the men said that they had never eaten better in their lives.

On day one of the starvation portion of the study, February 12, 1945, the rations were cut substantially.

The group shifted overnight from the three relatively generous meals of the control period to only two Spartan meals per day, a breakfast at 8:30 AM and supper at 5:00 PM.

The meals were designed to approximate the food available in European famine areas, with a heavy emphasis on potatoes, cabbage, and whole wheat bread. Meat was provided in quantities so small that most men would swear in later years that none was included at all.
One of the three dinners included the following:

The relatively bulky 255 grams of macaroni made that particular meal an anticipated favorite among the volunteers. The wet macaroni served was roughly the amount required to fill a coffee mug about three-quarters full.

Over the twenty-four week starvation part of the study, the subjects not only lost a considerable percentage of their body weights, but suffered a number of problems as well. As the time wore on the men thought ceaselessly about food, they became lethargic, they were cold all the time, they became depressed, they developed bleeding disorders, their ankles became edematous, and some developed more serious psychological disorders.

Below is a photo of one of the young men in this study (the book shows multiple photographs – this one is typical of all the subjects). The first photo was taken a couple of years prior to the start of the study, the second is with about a month shy of the end of the experiment. 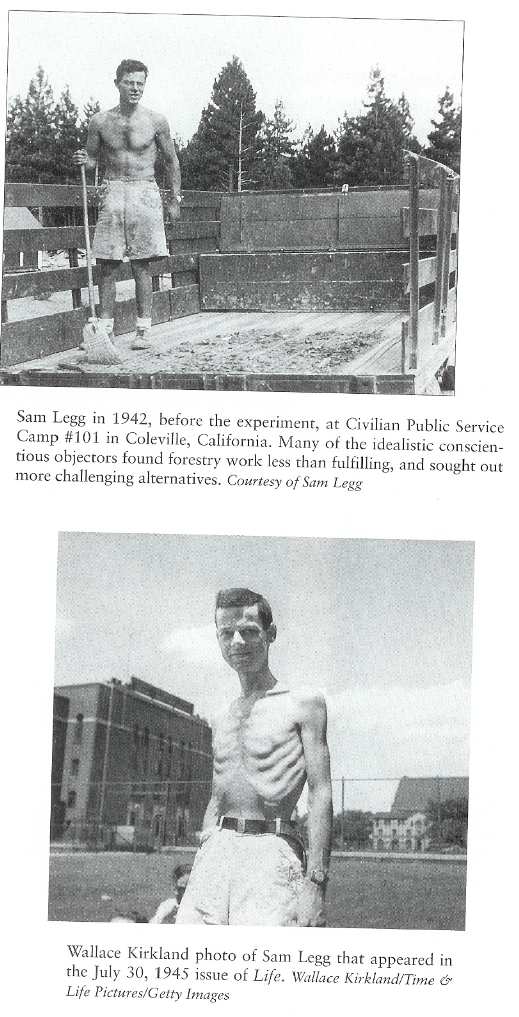 This young man suffered such psychological turmoil from the semi-starvation that he chopped off several fingers of his left hand a month or so after the bottom picture was taken.

The men in this study consumed macronutrients in the following amounts daily: protein 100 gm, fat 30 gm, and carbohydrate 225 gm. If you express these intakes as percentages, you come up with 25.5% protein, 17.2% fat and 57.3% carbohydrate.

Average energy intake of the subjects in the experiment: 1570 calories per day.

Now let’s look at another experiment conducted about 25 years later.

In the late 1960s John Yudkin’s group at the University of London performed a study that is most interesting in view of the Keys’ semi-starvation study. (Click here to get the complete pdf of this study)

For about 15 years Dr. Yudkin and his team had been running a weight loss clinic out of the university hospital using a low-carb dietary approach. Despite the patients’ doing well on the program, he and his staff had received the same criticisms all of us have who treat obese patients by restricting carbohydrates. In addition, because of his academic standing and long list of scientific publications, Yudkin’s peers had given him heat over the fact that his diet didn’t provide enough of all the vitamins and minerals required for health. As a consequence, he decided to do a study to see if there was any substance to their fault-finding.

He recruited 11 subjects aged 21-51 years for his study. He and his staff evaluated the regular diets of these 11 subjects over a two week period. The volunteers were then instructed on the basics of low-carb dieting as it was done in the hospital clinic and followed for two weeks on this regimen. The goal of the study was to determine the dietary intake of the essential nutrients in the low-carb diet to see if there were inadequacies.

Here were the low-carb instructions:

The instructions relating to the low carbohydrate diet were identical to those given to patients attending a hospital overweight clinic under our supervision. Essentially, the subjects were asked to take between 10 and 20 oz milk daily (about 300-600 ml), and as much meat, fish, eggs, cheese, butter, margarine, cream and leafy vegetables as they wished. The amount of carbohydrate in other food was listed in “units” with each unit consisting of 5 g carbohydrate; the subjects were told to limit these foods to not more than 10 units (or 50 g) carbohydrate daily.

As the low-carb portion of the study was progressing, Yudkin and his staff evaluated not only the intake of these subjects, but their mental status as well.

In conformity with our experience with this diet during the last 15 years, none of our subjects complained of hunger or any other ill effects; on the other hand, several volunteered statements to the effect that they had increased feeling of well-being and decreased lassitude. The average intake of calories and of protein, fat, and carbohydrate for the 11 subjects…were remarkably similar to those obtained for the six subjects of the previous study. [Yudkin had published a study in The Lancet in 1960 looking at the caloric and macronutrient intake of subjects on low-carb diets.]

Here is the chart from Yudkin’s paper showing the caloric and macronutrient changes when the subjects shifted from their regular diet to the low-carbohydrate diet.

The macronutrient consumption was 83 grams of protein, 105 grams of fat and 67 grams of carbohydrate. Putting this into percentages of overall intake, we find that diet was 21.3% protein, 60.6% fat and 17.1% carbohydrate. The energy intake was 1560 calories per day, almost exactly the same as the Keys study described above.

And, remember, these people were given all the food they wanted to eat. They weren’t forced to drop their calories to 1560 per day – they did it spontaneously because they had eaten until sated.

Here is the data in tabular form. 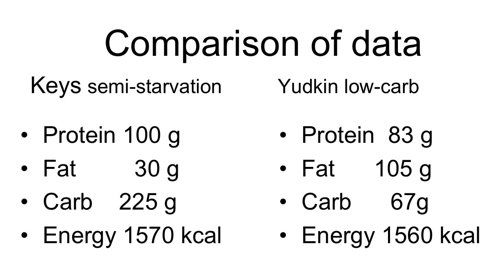 As you can see, the big difference is in the carbohydrate intake and fat intake. They are just about the reverse of one another in the two studies.

Both studies provided between 1500 and 1600 kcal per day, but with huge differences in outcome. In the Key’s semi-starvation study (high-carb, low-fat) the subjects starved and obsessed on food constantly. In the Yudkin study (low-carb, high-fat), the subjects, who had no restriction on the amount of food they ate, volitionally consumed the same number of calories that the semi-starvation group did, yet reported that they had “an increases feeling of well-being.” Instead of lethargy and depression reported by the Keys subjects on their low-fat, high-carb 1570 calories, those on the same number of low-carb, high-fat calories experienced “decreased lassitude.”

Both groups of subjects were consuming the same number of calories, but one group starved while the other did just fine. One group had to be locked down to ensure they didn’t eat more than their allotted 1570 calories; the other group voluntarily dropped their intake to 1560 calories and felt great. What was the difference? Subjects in both groups ate the same number of calories.

Maybe, just maybe it’s not the number of calories that makes the difference, but the composition of the calories instead.

I know that I’m not truly comparing apples to apples with the Keys and the Yudkin studies.  But the Yudkin study does confirm Yudkin’s 15 years of experience before he wrote his paper and they confirm my 20 plus years of experience taking care of patients on low-carb diets. I’ve had many, many patients who have stayed on low-carb diets for much, much longer than the men in Keys’ experiment stayed on their diets of roughly the same number of calories. Most of the papers in the medical literature on low-carb diets show a spontaneous drop in caloric intake that’s about what Yudkin documented when people switch over to low-carb diets. It stands to reason that if someone had replicated Keys’ experiment using the same number of calories, but with much more fat and a lot less carbohydrate, that the outcome would have been much different.

Yet the calories would have been the same.

So, I’ll say it again. It’s not simply a matter of calories, and anyone who says it is should perhaps give the issue a little more thought.