Intermittent fasting over a certain period of time is a feature of great religions all over the world and it is well known that nutritional habits, sleeping patterns and meal frequency have profound effects on maintaining human health. One of these fasting ceremonies is Ramadan. Ramadan is a religious month during which over one billion Muslims worldwide refrain from eating and drinking during the daylight hours for 1 month. The duration of restricted food and beverage intake is approximately 12 hr/day for 1 month, which makes Ramadan a model of prolonged intermittent fasting.

The authors are right in that Ramadan is a model of intermittent fasting with a host of subjects to pick from. I’m not sure that 12 hours of food abstinence a real intermittent fast makes, but it is a lot longer without food than the vast majority of us go for a month at a time. There is usually a pre-dawn meal that must be consumed before the sun rises and a post-fast meal that starts after sunset. I’m sure that Muslims don’t eat all night long during Ramadan, so I would venture that every 24 hours is made up of 12 hours without food, a few hours of eating before bedtime, sleep, then a meal in the pre-dawn hours. I would guess that there would be a total of maybe 5 hours during which people eat and 19 hours of each day in which they don’t. And for data gathering purposes, it’s nice that this schedule is maintained for an entire month. Since this fasting is a strong religious tenet for a group of people who take their religion very seriously, the data obtained from Ramadan fasting studies is probably much more valid than that obtained from typical volunteer subjects.
In this study 40 healthy, normal weight men and women aged between 20-39 years who underwent Ramadan fasting were compared with a group of 28 similarly aged men and women who did not fast. Data derived from questionnaires indicated that the majority of the fasting subjects ate their last meal between 1-2 AM and their first meal after the fast at around 6:30 PM, which means that most fasted for around 16 hours. (I assume that these subjects did not consume a predawn meal, eating late and preferring to sleep in instead.) The non-fasting subjects ate breakfast, lunch and dinner at regular times. Researchers collected twice-daily blood samples 1 week before Ramadan, during the last week of Ramadan, and 20 days after Ramadan.
Interestingly there was no difference in energy intake and no weight loss difference between the two groups. Apparently the fasters made up for lost time when they chowed down and ate as much as those who ate three squares throughout the day.

…average daily energy and water intake remained comparable in both the fasting and nonfasting group and the working hours of both groups did not change during the whole study. During Ramadan, in the fasting group, meals were taken exclusively at night while in the nonfasting group there was no change in the eating and sleeping habits. …the sleep pattern of the fasting group was delayed by approximately 2-3 h[ours] on average. The energy and the water balance seemed to be constant on a daily basis as the body weight and the 24-hour urinary volumes did not change during Ramadan. Hence there were two major changes in the routine of the fasting subjects: meal times and sleeping patterns.

What did the study show in terms of inflammatory response?
There were significant reductions in interleukin-6 (IL-6), C-reactive protein (CRP) and homocysteine during the fast that, in the case of IL-6 and CRP, lasted for at least 20 days beyond the fasting period.
What does this mean?
In short it means that the Ramadan intermittent fast brought about a significant decrease in inflammation.
IL-6 is a proinflammatory substance released by macrophages and other inflammatory cells that reaches the circulation and ultimately the liver. A number of studies have shown that about 30 percent of IL-6 comes from adipose tissue, especially abdominal or visceral adipose tissue (or more correctly, from the macrophages and other cells of the innate immune system that attack these fat cells). When IL-6 levels are high enough they stimulate the acute phase response in the liver. During the acute phase response the liver releases a number of proteins -including CRP- into the circulation. The job of these acute phase proteins is to prevent ongoing tissue damage, isolate and destroy the infective organism (or, in the case of visceral fat, the invasive organism) and activate the repair processes necessary to restore normal function. CRP is an acute phase protein that binds to certain sites on microbes, probably assists in the helping other parts of the immune system attack foreign and damaged cells, and enhances the consumption of these cells by the macrophages. CRP is an important player in the innate immune response, which is the blind, hardwired early responding part of our immune system.
Both IL-6 and CRP are elevated during inflammation, and both, but particularly CRP, are used as markers for inflammation. There is now a large amount of data showing that elevated CRP levels are a potent risk factor for cardiovascular disease.
The decreased levels of homocsyteine during fasting are an intriguing phenomenon. Homocysteine can react spontaneously with many biologically important molecules, especially proteins. It can react with and cause damage to the folding of important proteins, i.e., enzymes, immune proteins, receptors, growth factors, and structural proteins, leaving them with a configuration that is less than optimally functional. High homocysteine levels cause oxidative damage and are thought to cause inflammation, especially in the endothelium. As a consequence, elevated homocysteine levels are, like CRP, a fairly potent risk factor for cardiovascular disease.
Homocysteine is an intermediary in the metabolic pathway between methionine and cysteine, both important amino acids. Folate and vitamin B12 are essential in making the transition from methionine to cysteine without allowing large amounts of homocysteine to stack up. A deficiency of either folate or vitamin B12 (both B vitamins) allows an increase of homocysteine, which makes it’s way into the circulation and causes problems. What makes this study so interesting is that both folate and vitamin B12 levels increased substantially in the fasting subjects despite their not eating any more food containing these substances than the nonfasting subjects. It’s this increase of the folate and B12 that more than likely decreased the levels of homocysteine in the fasting subjects.
The authors speculate:

…both folate and vitamin B12 levels were increased in the last week of Ramadan in the fasting subjects and a negative correlation has been detected between these two vitamins and homocysteine levels. None of our subjects used any kind of vitamin supplements and according to the questionnaire, consumption of food containing B vitamins did not change during the whole study period. The changes in the rest-activity cycle and meal schedule during Ramadan may beneficially affect the bioavailability or redistribution of cofactors like B vitamins in the methionine pathway, which in return may lower plasma homocysteine levels. These results are consistent with [a] previous study in which homocysteine levels but not B vitamins were evaluated in the fasting subjects during Ramadan.

This ‘bioavailability’ and/or ‘redistribution’ is similar to that which happens with vitamin C during an all-meat diet. It is well known among arctic explorers that those on diets of nothing but fresh meat don’t get scurvy. The British sailors in the 1700s who were afflicted with scurvy consumed a diet composed primarily of carbohydrates. When British naval surgeon James Lind gave them fresh lime juice their scurvy was cured or prevented. As we all know now, the cure and prevention came about due to the vitamin C in the lime juice. Most researchers and physicians still believe that diets deficient in vitamin C will cause scurvy, but this isn’t the case, especially with fresh meat diets. The glucose molecule competes with the vitamin C molecule for entry into the cells. When glucose molecules are high – as they are in high-carb diets – much more vitamin C is required to compete with the glucose and actually make it into the cells. During all-meat diets, glucose is low, and a much smaller amount of vitamin C can still enter the cells and do its job.
Whatever the case, fasting reduces the levels of homocysteine, which is a very good thing.
Below are the charts showing the reduction of IL-6, CRP and homocysteine in the fasting subjects. 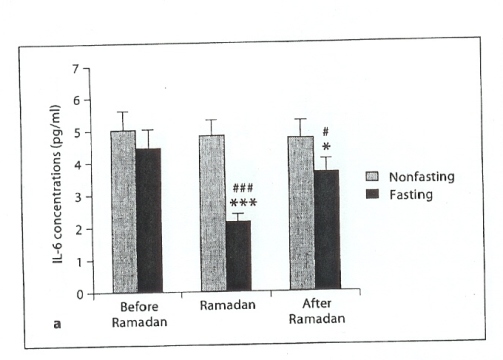 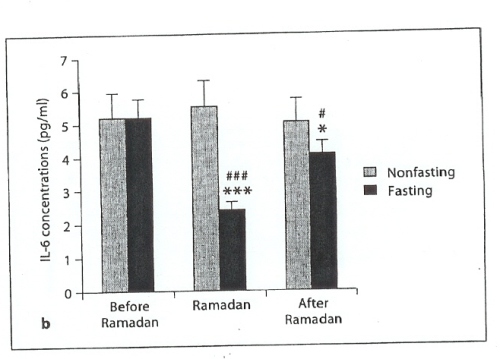 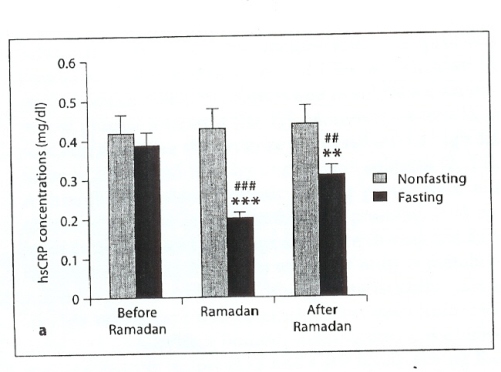 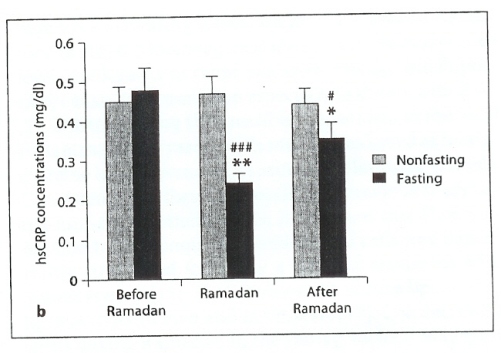 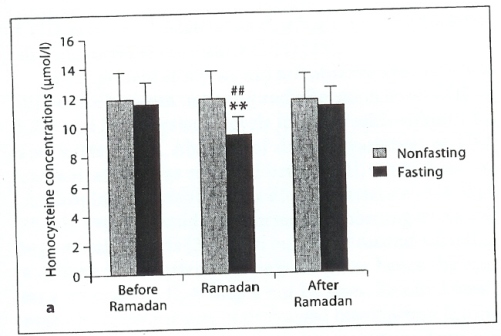 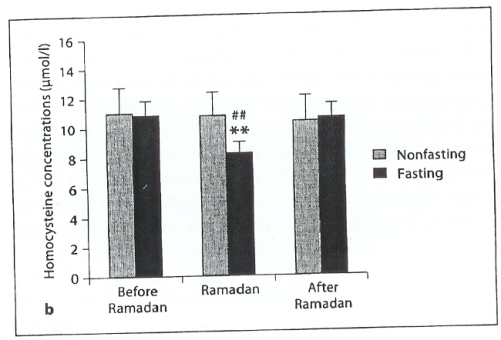 This study adds to the data showing that intermittent fasting does indeed reduce inflammation. Whether the reduction comes from the long period without food or from the change in sleep patterns the study doesn’t show. But I think it’s reasonable to assume that it is probably the former rather than the latter. Reduction in sleep time all by itself has been shown to be inflammatory, so I would guess that were these subjects to have maintained their regular sleep patterns and fasted fasted, they would have shown an even greater decrease in inflammatory parameters. But that is speculation; we’ll have to wait for the real data.
This paper confirms for me the idea of not eating between meals and not consistently snacking as some would recommend. I like to let things rest totally between meals and not nibble, even on low-carb snacks. Based on the intermittent fasting data that is rapidly accumulating, I think that eating as infrequently as possible is probably the best bet to keep your innate immune system behaving as it should, especially if you follow a higher-carb diet.