If your doctor wants to put you on a statin, ask why 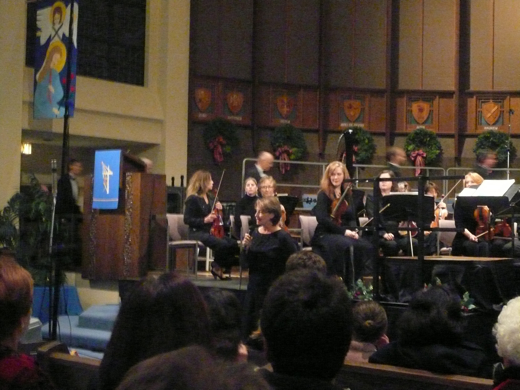 First, scroll down and put the video you’re hearing on pause. I couldn’t figure out how to post it without its going off when you log on. I’ll explain what it’s all about shortly. (If someone knows how to get this to play on demand and not every time one logs onto this site, let me know and I’ll fix it.)
I’m sorry I’ve been so dilatory in posting and answering comments. I’ve been up to my eyes in a couple of projects I’ve got going on. I was dragooned into helping MD with her first concert as president of the Santa Barbara Choral Society, which went off terrifically well. The above photo is of MD making her president’s speech to a packed house while waiting for the singers to file in and take their places behind the orchestra. I’ve also been swamped with other projects as well, one of which I’ll blog about later this week. And MD and I are making an unexpected trip to New York for a few days next week, so our time has been telescoped because of that.
Enough whining about all the reasons I haven’t posted. Let’s get on with today’s topic.
There is an outfit called Medscape (a part of WebMD) that sends emails to physicians keeping them up to date on all sorts of medical information. Medscape is run my mainstream physicians and typically presents the mainstream view of whatever it is they’re presenting. I usually give these emails the once over to kind of keep myself aware of what’s going on in mainstreamland. Today’s email I thought worthy of sharing.
It seems that there is a movement afoot to get physicians to be more forthright with their patients. A government agency has gotten into the act and plans to bombard physicians with exhortations to include their patients into the treatment team. (A strange idea indeed!) These governmental folks want doctors to better explain to patients why they are prescribing the medications they’re prescribing and why they are doing everything else it is they’re doing. The message is that patients should never go away from their doctors’ offices without having every question answered.
I’ve always advocated this novel idea of including the patient as part of his/her own treatment team. It would seem strange to leave the patient out. I’ve never told a patient to take a medicine just because I say to take it. I think all physicians should be able to explain to patients why they are prescribing the medicines they prescribe, doing the procedures they plan to do, etc. It’s only fair. It’s nice to know that it’s now becoming part of the mainstream.
Next time your doctor tells you that you should go on a statin costing a couple of hundred dollars per month for the rest of your life, ask him/her why. And don’t accept the old line that statins have been proven to be effective because that’s far from the case. Ask to be shown the data. And ask the doctor to explain it to you.
As you can see from the video below, Big Brother is going to start demanding that doctors explain. So don’t be shy. If you feel intimidated by your doctor and afraid to ask questions, it’s probably time to get another doctor.
Here is the Medscape video and below is the printed content in case you can’t get the video to work. The doctor speaking hits the nail on the head with his first sentence: “Patients should take charge of their own health.” Truer words were never spoken. While you’re watching this video, remember that it’s targeted at doctors, not at patients.
[The video has been disabled. Please see the content below.]

As physicians, we are beginning to see patients becoming more involved in decisions about their care. Even though this is a major change to how we practice medicine, it will, over time, create a genuine partnership between doctors and patients.
Research shows that patients who left doctors’ offices with even 1 unanswered question reported the lowest level of improvement in their symptoms. In addition, these patients reported being less satisfied with their care. Other studies show that patients who ask questions and become more involved in their healthcare are more likely to follow clinicians’ instructions and report better results.
However, many patients are reluctant to speak up — because they don’t want to admit that they don’t understand something, because they are overwhelmed by their illness, or because language, health literacy, or cultural barriers get in the way.
Today, health care providers have come to recognize the importance of clear, ongoing communication, including questioning why a particular treatment decision was made. We need to engage our patients in the same way. To that end, my agency, the Agency for Healthcare Research and Quality, has developed a new public awareness campaign with the Ad Council to encourage patients to take a more active role in their healthcare.
You will soon begin to see or hear public service announcements urging patients to ask questions of all their health care providers. The education campaign also includes a Web-based Question Builder at www.ahrq.gov which helps patients create a list of questions for their next medical appointments.
As physicians, we have an obligation to help our patients understand the decisions that affect their health. While it may challenge our way of practice, it is the right thing to do.
I’m Dr. Carolyn Clancy, director of the US Agency for Healthcare Research and Quality, and that’s my opinion.

There you have it. Go forth and take charge of your own health.