How foie gras is made 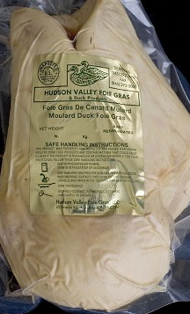 I’ve posted a couple of times on foie gras – on both cooking and eating it. In one of the posts I quoted from an article in the International Herald Tribune that I read on the plane coming back from France. At the time this article wasn’t available for linking, but it is now. The journalist who wrote the piece had wondered about how gavage (the force-feeding of ducks and geese) was performed, so he hied himself to the Hudson Valley Foie Gras in New York (where are own foie gras originated) to see for himself.

To animal welfare groups, the obscenity of force-feeding, known by the French word “gavage,” is self-evident. But Ginor and his partner Izzy Yanay, who runs the farm, accuse their critics of anthropomorphism and ignorance of duck anatomy and behavior. They say the practice is as benign as it is ancient, since waterfowl lack a gag reflex and have sturdy throats that easily tolerate grains, grit, stones and inflexible gavage tubes. To understand gavage, they say, is to accept it – as they insist poultry researchers have, after examining birds for signs of undue suffering during gavage and finding none.
I visited Hudson Valley Foie Gras recently, seeing gavage for the first time. I saw no pain or panic in Yanay’s ducks, no quacking or frenzied flapping in the cool, dimly lighted open pens where a young woman with a gavage funnel did her work. The birds submitted matter-of-factly to a 15-inch tube inserted down the throat for about three seconds, delivering about a cup of corn pellets.
The practice, done three times a day for a month, followed by slaughter, seemed neither particularly gentle nor particularly rough. It was unnerving to see the tube going down, and late-stage ducks waddling bulkily in their pens, but no more so than watching the epic gorging at an all-you-can-eat buffet, where morbid obesity is achieved voluntarily, with knife and fork.

Since the International Herald Tribune is owned by the New York Times, and since the New York Times never misses an opportunity to demonize anything that flies in the face of any of the liberal shibboleths – global warming, minimum wage, welfare reform, animal cruelty, etc. – I figured the report had to have been, if anything, hedged toward the anti-gavage. Considering that, it doesn’t look like all that bad a deal for the ducks, especially since it takes only a few seconds, not the all-day force feeding that many would have us believe they endure. In fact, the case could be made that – just as with humans – this carb overload is actually enjoyable.
MD blogged on the situation from her perspective.

But is making ducks obese humane, even if they enjoy it?
Certainly developing a fatty liver isn’t any better for the ducks in the long run than it is for people, but with one clear difference. For ducks, there isn’t a long run. Unlike ducks, people live long lives, potentially get sicker, may become less productive, and surely end up leading more costly lives in terms of the medical burden to themselves, their insurer, or society as the metabolic consequences of fatty liver, insulin resistance, diabetes, and obesity take their toll. For domestic fowl, raised for food, their end is going to be pretty much the same, regardless of the condition of their livers when the ax falls. If they enjoy a bit of corn-gluttony along the way, don’t seem to object to it, aren’t discomfited overmuch by it, then where’s the harm? For me, it’s a treasure and I can say without hesitation that no duck ever guzzled corn in vain whose liver wound up, seared, on my plate.

Also coming from the New York Times is Michael Pollan who has a great piece on how the politicians are creating a smoke screen by going after the only two (politically unconnected) producers of foie gras in this country instead of dealing with the giant factory farms (very politically connected; read: many campaign contributions), which deal much more misery to animals in their keep.

I’m not about to defend foie gras from the legions of righteous animal defenders. But do we have any reason to believe that feeding ducks and geese corn through tubes put down their throats is any more brutal than snipping off tails and beaks? I have not visited either of America’s foie gras farms, but I note that they have invited journalists to visit and see the operations for themselves. (Just try to wangle your way into an industrial chicken or hog facility.) Some of the journalists who have accepted that invitation report that the birds rush over to the farmers at feeding time. Our own visceral revulsion at the prospect of having tubes stuck down our throats may have to do with the fact we have a gag reflex; ducks and geese do not. I seriously doubt you’d ever see pigs rushing over to the man wielding the pliers.
To ban foie gras is symbolic politics at its worst, a way to create the appearance of doing something about a problem that politicians — and, let’s face it, most of us eaters — would rather not confront. So we close down a couple of foie gras farms. (Though the California law gives the farmers till 2012 to desist, which is odd: if force-feeding ducks is really so heinous, then how in good conscience can we abide the practice for six more years?) We brace ourselves for a major change in our eating habits: no more foie gras after 2012. What a sacrifice! And, after patting ourselves on the back for all we’ve done for the animals, we can now, with clear conscience, turn back to our breakfast, ordering bacon and eggs, sunny side up.

As the saying goes, a picture is worth a thousand words. And if a picture is worth a thousand, then a video ought to be worth about ten million. One of my readers alerted me to the fact that the iconoclastic chef Anthony Bourdain had a segment on the making of foie gras on his television show. I looked on YouTube, and, sure enough, there it was buried deep within dozens and dozens of film clips showing the alleged cruelty of the procedure.
After you watch the Bourdain video, take a look at a few of the others. You’ll notice that they make the gavage process last much longer than it actually does – at least this was the case with the half dozen or so I watched. To paraphrase one of the cable news networks: I report, you decide.
[youtube]ABeWlY0KFv8[/youtube]
(Hat tip to MAC for telling me about this video)