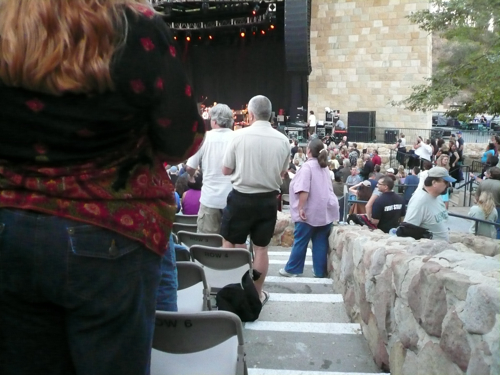 Now, you may tell me that all people stand and sway to the music at concerts. Not so. Not so at all. At some concerts the ratio of hemorrhoids to others is small, at others – Gordon Lightfoot concerts, for example – the ratio is so small that it’s infinitesimal. MD and I went to the SB Bowl a few days before the Cocker/SMB concert and saw James Taylor. As you can see from the photo below (which you can click to enlarge), there was nary a hemorrhoid in sight, at least not one in front of us, which, as far as I’m concerned, is all that really matters.


The hemorrhoids to others ratio is huge at some concerts. Jimmy Buffet comes to mind. I’ve seen him a couple of times, and at the first chord of each song, all the Parrotheads jump to their feet and start to jerk and twitch. Annoying to the max. I can’t even imagine what it must be like to be at a Hank Williams, Jr. concert. All I know is that I couldn’t be dragged to one with a team of horses. Other concerts are a crap shoot. MD and I saw Paul McCartney in Michigan years ago, and everyone stood the whole time, making it virtually impossible to see. Had everyone remained seated, everyone could have seen. As it was the hemorrhoids in the front, prevented people in the back from seeing the concert. We saw McCartney two more times over the years – both the later times in the South – and most of the people sat. The latter two concerts were the same music but much more civilized in terms of concert goers. So, you never know. I guess you pays your money and you takes your chances.
At least we lucked out in one category at the concert. We had good seats on the end of the row, and no one, not one single person, went in and out during the performance. I can never understand why people pay good money to go to a concert or a sporting event, then spend all their time going back and forth to the concession stand. Go to the concert or the game and sit and watch it, for God’s sake. You can eat and drink at home or during intermission or halftime. That’s my opinion, at least.
The Steve Miller Band was kind of a disappointment on a couple of fronts. First, the sound was way too loud. Don’t the people that put these things on realize that sounds in excess of a certain decibel level can damage hearing permanently. And the damage is cumulative. I don’t know what the sound level was during the SMB performance, but it was earsplitting.
Second, the band has added a new member, who is a lead singer and backup singer. He sang four or five new songs that the band has recorded, none of which sound anything like the SMB is supposed to sound. The guy has a good voice, but with him singing, it’s a different band. And, worst of all, the guy is on stage for the entire concert, and when he’s not singing, which is most of the time, he gambols around the stage doing some kind of dance that makes him look like the village idiot or worse. It is annoyingly distracting. And not just to curmudgeonly me – I heard others make the same comment.
As the concert mercifully ended and we trudged out and down the hill (the SB bowl is way up on a big hill) and the drunken chavs stumbled along (many were literally falling-down drunk), I couldn’t help but wonder how people can think it’s fun to go to a concert, have their eardrums blown out, and get knee-walking drunk. It’s a mystery to me, but God knows, a lot of people must enjoy it.
I left the concert with my ears ringing and damn glad it was over. MD left wishing she had come with anyone but me. We both dreaded that we had to get up the next morning at 4 AM to leave for Napa in order to get there in time for our meeting.
I’ll post about Napa next and the heart stopping $1400 dinner bill. I’m sorry to bore you all with my trials and tribulations of the past few days, but I’ve faithfully posted on nothing but nutritional topics for the past year. No political ruminations, no weird things I’ve found in my daily slog through the web, no nothing other than pure nutrition. So, you’ve got to indulge me on these couple of soul-cleansing blogs. It’s how I regenerate and restore my good humor.