Hillary has a short memory 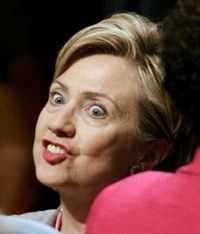 couldn’t stand the insufferable John Kerry and I absolutely could not abide the smarmy and insipid John Edwards being anywhere near the presidency) and even less a fan of Alberto Gonzales, but this latest kerfuffle about the discharge of a handful of U.S. Attorneys is ludicrous.
The Democrats, sensing blood in the water, are in a feeding frenzy of accusations of politicization of the U.S. Attorney’s office. But even worse than this predictable partisan gotcha is the piling on of the much-despised Hillary Clinton. She should know better, but, apparently, she has a short memory.
Today’s lead editorial in the Wall Street Journal should help her remember.

As it happens, Mrs. Clinton is just the Senator to walk point on this issue of dismissing U.S. attorneys because she has direct personal experience. In any Congressional probe of the matter, we’d suggest she call herself as the first witness–and bring along Webster Hubbell as her chief counsel.
As everyone once knew but has tried to forget, Mr. Hubbell was a former partner of Mrs. Clinton at the Rose Law Firm in Little Rock who later went to jail for mail fraud and tax evasion. He was also Bill and Hillary Clinton’s choice as Associate Attorney General in the Justice Department when Janet Reno, his nominal superior, simultaneously fired all 93 U.S. Attorneys in March 1993. [My italics] Ms. Reno–or Mr. Hubbell–gave them 10 days to move out of their offices.
At the time, President Clinton presented the move as something perfectly ordinary: “All those people are routinely replaced,” he told reporters, “and I have not done anything differently.” In fact, the dismissals were unprecedented: Previous Presidents, including Ronald Reagan and Jimmy Carter, had both retained holdovers from the previous Administration and only replaced them gradually as their tenures expired. This allowed continuity of leadership within the U.S. Attorney offices during the transition.
Equally extraordinary were the politics at play in the firings. At the time, Jay Stephens, then U.S. Attorney in the District of Columbia, was investigating then Ways and Means Chairman Dan Rostenkowski, and was “within 30 days” of making a decision on an indictment. Mr. Rostenkowski, who was shepherding the Clinton’s economic program through Congress, eventually went to jail on mail fraud charges and was later pardoned by Mr. Clinton.

Ah, just reading this and all the old Arkansas connections come back. Web Hubble’s sister was one of the nurses in our clinic for several years. She was very capable and a nice person. And Webb Hubble’s son was in our middle son’s class at the University of the South in Sewanee, Tennessee. We were often together on parent’s weekends and other sundry occasions.