Hard at work in Seattle 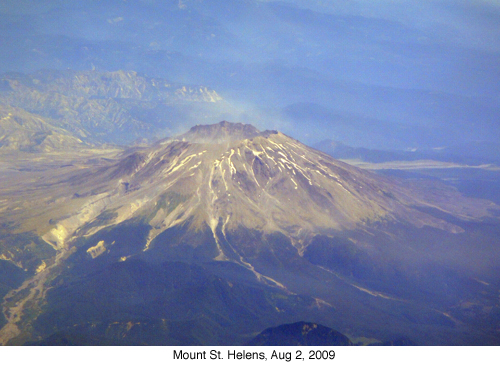 I haven’t posted in a week because MD and I have been hard at work in Seattle and at Orcas Island, the largest of the San Juan Islands located in northwestern Washington.

We’re working on our project that we’ve been keeping under wrap.  No, it’s not the new book, and, no, it’s not Metabosol.  It is something pretty cool and even revolutionary in its own way.  Barring further bumps in the road (there have been a few), we should be able to reveal all on September 1. The reason for the secrecy is that this project is most press worthy, but, for reasons that will be obvious when we reveal what we’ve been working on, we don’t want the press to report it prematurely.

We flew into Seattle Sunday afternoon after buzzing across the top of Mount St. Helens and looking into the crater left when the top 1300 feet of the mountain blew off on May 18, 1980.  After landing, we got picked up by our partner and taken to his boat for an afternoon on Lake Union.  A huge annual celebration was taking place, so we spent the afternoon on a lake made choppy by a thousand other boats while the Blue Angels zipped through the sky overhead.  Seattle has been experiencing brutally hot temperatures, which we got blasted by on Sunday afternoon.

When we were in Seattle in December, we got caught in the worst snow storm in 30 years.  All the while we were slogging through the snow, our hosts were telling us to come visit in the summer when the weather is always beautiful.  So, we come in the summer only to be confronted with the worst heat wave since temperatures have been recorded.  I hate to imagine what we may encounter on the next trip.

Here is the Seattle skyline on Sunday afternoon.  Notice the chop on the water.  We were one of God only knows how many boats in the lake.  After getting pounded by the chop and brutalized by the heat, we tied up to a nice restaurant and had a lovely dinner complete with (at least for me) copious amounts of Jameson to go along with the copious amounts of Jameson I had already swilled to combat the heat on the lake. 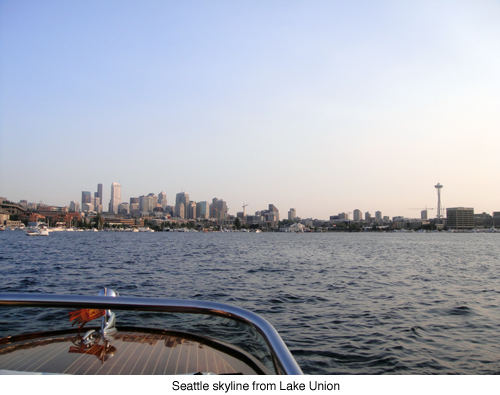 Our partner’s boat, which is his pride and joy, is a handmade Venetian water taxi.  He worked with a guy who makes such boats in Venice, Italy several years back, had it built to his specs and then transported to Seattle.  It is a gorgeous boat, and, one day, I hope to go out on it in clement weather.  Below is a photo of MD standing by the boat tied up to another restaurant the last time we went out in it.  The temperature was about 23 degrees (not counting the chill factor), and you can see by the lack of chop on the water surface that we were the only fools out there.  (In case you were wondering, it is heated inside…but not air conditioned, thought the back of the roof slides open to admit fresh air and sunshine.)  As I say, our partner loves to show off his boat. 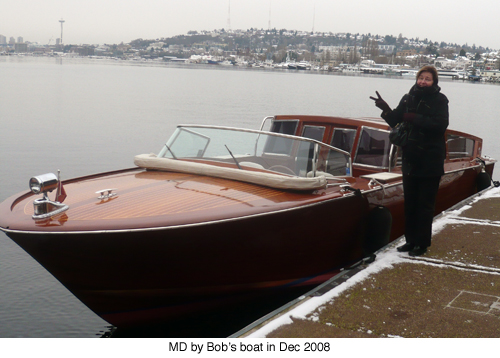 After our Sunday respite (which it was, despite the heat and chop), we crashed and for the next two days worked from early morning until late at night.  We didn’t have time to answer emails, deal with blog comments, or do much of anything other than work. 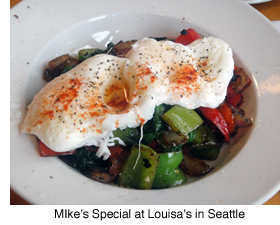 We started each day with a quick breakfast at Louisa’s, a little restaurant close to the office where we spent our days.  One of the menu selections, fittingly enough, was called Mike’s Special, so how could I resist.  Especially when it was such a great low-carb option: two poached eggs on a bowl of sauteed spinach, red and green peppers and onions.  Good, good, good.  It came, of course, with a giant piece of toast that was at least an inch thick, which I ate a couple of bites of just to try.

As we were eating breakfast on the last morning, a man was eating alone while reading the paper at the table next to us.  He looked to be about 70 or so and was fairly thin with a pot belly.  He had on two pressure stockings on his lower legs and bruising in the crook of one of his arms from where, obviously, blood had recently been taken.

Watching him eat, I created an entire story about him that I’ll bet is not too far from the mark.  Even if it is not accurate in this man’s case, it is totally (and sadly) accurate in many thousands of others.

The man was eating a bowl of oatmeal.  He had a glass of skim milk so fat free it was almost blue that he poured little bits of into his cereal from time to time.  Along with his oatmeal, he was eating one of the giant pieces of toast the restaurant serves.  He took one pat of butter (I assume there was no margarine available) and cut it in half.  He carefully spread one half pat on one half of his toast then loaded it with an entire individual serving of jelly.  After eating the first half piece of toast, he prepared the second half the same way and ate it.  The only fat he got from his entire meal was that that came from that one pat of butter.  Based on the size of the bowl of oatmeal and the size of the toast (and the skim milk), I calculated that this guy consumed about 100 grams of carbohydrate. (Thirty grams in the oatmeal; at least 30 in the toast; 15 in each container of jelly; and about 10 in the skim milk.)

I imagine (here is where I’m speculating) that he has elevated cholesterol and has been told by his doctor to watch his fat.  And he is complying. He got a whopping 4 grams of fat in his one pat of butter (36 calories-worth) while getting 100 grams of carb in the rest of his meal (400 calories-worth). The tiny bit of fat he got contained short-chain fatty acids that are immune enhancing whereas the 100 grams of carb he got provided really no health benefit.  Since the 100 grams represents 20 times the amount of sugar circulating in his blood, his pancreas had to release a large amount of insulin to deal with it.  His pot belly indicates that he is already insulin resistant with an abdomen full of visceral fat, so he no doubt secreted a lot more insulin than a person without insulin resistance.  This excess insulin help him store fat in his liver, increase his level of visceral fat, ratchet up the inflammatory process, injure his blood vessels even more and increase his risk for heart disease, the very thing his doctor was trying to prevent by putting him on a low-fat diet.

How much better off this guy would have been had he joined me in the Mike’s Special.  But, his cardiologist, I’m sure, would have been apoplectic.  A sad state of affairs indeed.

MD and I were so busy this entire week that not only haven’t we been able to keep up with even our emails, we haven’t been able to go through the over 300 requests we got for a copy of our new book.  We will go through those and respond to everyone over the next couple of days.

Also, I have about 60 comments dating back for months that are stacked up in my awaiting-moderation queue. My plan is to deal with six of them per day and have them all cleared out within 10 days.  And this all while keeping current on new comments coming in.  So if you have had a comment languishing, it should be up within the next ten days.

Our newly designed site is supposed to be up this next week.  Keep your fingers crossed.  I’m certainly keeping mine crossed.

For those of you who still can’t get your minds around the idea that exercise doesn’t make you thin, read next week’s Time. The cover story, ‘Why Exercise Won’t Make You Thin,’ is a long article parroting what Gary Taubes wrote about a couple of years ago.  The notion has finally made it to the mainstream. 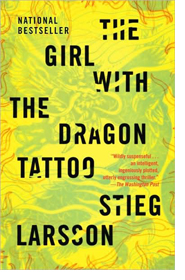 Finally, I’ll end with a book recommendation.  I finished The Girl with the Dragon Tattoo on the flight to Seattle.  If you haven’t read it, and if you like offbeat mystery/thrillers, give it a whirl.  A disgraced investigative journalist headed for prison teams up with Lisbeth Salander, the eponymous girl with the dragon tattoo, and one of the strangest and most interesting protagonists to ever find her way into fiction, to solve, at the request of an aging industrialist, a decades-long mysterious disappearance.  The novel, set in Sweden and written in Swedish but masterfully translated, has become a world-wide phenomenon.  The book is satisfying throughout, and I highly recommend it.  As soon as I catch up on all my work, I’ll start the second book in the series, The Girl Who Played with Fire.