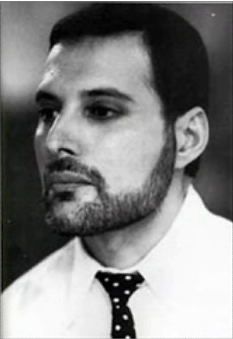 62 years ago Farrokh Bulsara was born in Zanzibar, an island off the east coast of Africa, which is now part of Tanzania, but was then a British colony. His parents were Parsis, citizens of India of Iranian origin and practitioners of the Zoroastrian religion. As young Farrokh played in the island sands and balmy breezes, it’s unlikely he would have foreseen the life ahead of him. It’s doubtful that he could have foreseen that his creations would move people attending athletic events in vast stadiums throughout the world to leap to their feet and chant. He probably didn’t even know there was a National Football League a world away in the United States, where his words would become a part of every game.
When he was of age to start his education, Farrokh’s parents sent him back to India, where he attended a boarding school near Bombay. There he didn’t particularly distinguish himself, but he did take piano lessons and formed a band that played at school functions. After completing his education in India, he moved back to Zanzibar to live with his parents. During the revolution in 1964, the Bulsara family fled Zanzibar for London, where Farrokh began his college education. After a few stops and starts, he ultimately obtained a degree in Art and Graphic Design from a small technical college.
After graduation Bulsara took on a series of jobs including selling second-hand clothing and working in the baggage area of Heathrow airport. As he drifted from job to job, none of which involved art or graphic design, he formed or joined a few bands, all of which failed. Despite his dead end jobs, his keen interest and focus on music kept him inspired and constantly on the prowl for a band to join. In 1970 he teamed up with the members of a failed band called Smile to form yet another band. Farrokh overcame the resistance of other band members and named the new group Queen, then changed his own name to Freddie Mercury and launched himself into the pantheon of Rock immortals.
Although untrained as a singer, Freddie Mercury was endowed with a spectacular 3.5-4 octave range voice. As a consequence, you don’t see many groups out now doing Queen music, at least not as Freddie did it. There are countless Beatles imitators out there because though the Beatles were clever songwriters, they didn’t have particularly great voices. Their sound is easy to reproduce with fairly ordinary singers – even John Lennon’s sort of whiny voice. Elvis impersonators are a dime a dozen for the same reason. And all of them sound pretty much just like the King. Not so with Freddie. Few can match his vocal range.
Here is Freddie singing a song he wrote called Killer Queen. Ignore the camp (it was all part of Queen’s early shtick) and focus on the range of his voice and the ease with which he hits all the right notes.
[youtube id=”2ZBtPf7FOoM”]
[youtube]http://www.youtube.com/watch?v=MMz-wi50ACU[/youtube]
Not long after Luciano Pavarotti died I posted a video of a pop singer compared to a trained opera singer at the height of his powers. There was really no comparison. Freddie, however, could hold his own. Here he is in concert with Montserrat Caballé.
[youtube id=”q0wdxj8-mAU”]
[youtube]http://www.youtube.com/watch?v=fJ0-ggmKRLU[/youtube]
As MD pointed out after having watched this video, it’s apparent that Freddie wasn’t formally trained because he sings from his throat. Which is one of the reasons he developed vocal nodules as he aged.
Not only was Mercury a phenomenal singing talent, he was no slouch as a songwriter. Most of the greatest Queen hits were penned by Freddie. Queen and Freddie pioneered the use of video to promote their music and were really the first to perform stadium rock. Freddie wrote two of the songs that are staples at athletic events throughout the world today: We Will Rock You and We Are The Champions. Here he is performing these songs before God only knows how many people at Live Aid.
[youtube id=”ri97Sk8Gw3s”]
[youtube]http://www.youtube.com/watch?v=zBUJztI884M[/youtube]
In what could have been Mercury’s theme song about his own life of excess and flaming out early, here is the group performing another Freddie-written song, Don’t Stop Me Now.
[youtube id=”HgzGwKwLmgM”]
[youtube]http://www.youtube.com/watch?v=58CJih1iYC0[/youtube]
You can better understand the quality of Freddie’s voice when you see someone else with an excellent voice try to duplicate it as this guy does on American Idol. Notice how he can’t hit the high notes at the end and so he bails out and drops them down an octave or two. Link here. For some reason I couldn’t get this YouTube to embed.
Now here is Freddie performing Bohemian Rhapsody, a song he wrote considered by many to be the greatest rock song ever written. Listening to this, you can see that Queen was truly a choral group, which is why MD likes them so much. (Every time I hear the line in this song that goes “Spare him his life from this monstrosity” I always think of all the PBs (poor bast**ds) who get frightened by their misinformed doctors into going on a lifetime of statin drugs unnecessarily.)
[youtube id=”irp8CNj9qBI”]
[youtube]http://www.youtube.com/watch?v=irp8CNj9qBI[/youtube]
MD is afraid that you all will think I have a man crush on Freddie Mercury. I really don’t, but I am mesmerized by the range and quality of his voice. And by his songwriting ability. It’s almost unimaginable that he was able to do the musical things he did without any formal voice or musical training other than the same piano lessons countless others have taken in childhood and ultimately forgotten.
Here is one more.
[youtube id=”kijpcUv-b8M”]
I hope you all have appreciated this little break from nutrition (I needed it after that last post), and I hope you enjoyed these videos as much as I did tracking them down and watching them myself.