In going through the huge pile of mail confronting me when we got home from Europe, I found a prepublication copy of Gary Taubes’ new book Good Calories, Bad Calories. 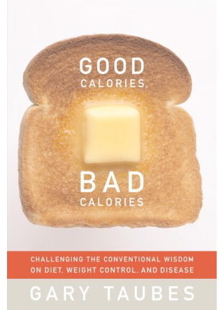 I’ve read the book in manuscript form when it was 800 plus pages, again when it was cut down to 700 or so pages, and now I’m going through it again at its new, svelte 600 or so pages. It is a remarkable book, and one that, I believe, will initiate a sea change in the way everyone looks at nutrition. Unless I miss my guess, Taubes will be on every talk show known to man, and his book will be reviewed everywhere, and talked about by everyone. Just think of the satisfaction you will have (those of you who are long-term low-carbers) in just a couple of months when you can go around with big smiles on your faces telling everyone I told you so.
Here is a review from Pulitzer Prize winner Richard Rhodes that I cribbed from Amazon.com:

Gary Taubes’s Good Calories, Bad Calories is easily the most important book on diet and health to be published in the past one hundred years. It is clear, fast-paced and exciting to read, rigorous, authoritative, and a beacon of hope for all those who struggle with problems of weight regulation and general health–as who does not? If Taubes were a scientist rather than a gifted, resourceful science journalist, he would deserve and receive the Nobel Prize in Medicine.

I pretty much agree with Rhodes. The book is phenomenal. Gary has been working on it for as long as I’ve known him, and he has left no stone unturned in his quest for a complete understanding of how things have gone so wrong with the nutritional establishment. He has interviewed – and sometimes engaged in screaming matches with – all (and I mean all) of the living (and some who have recently died) ‘experts’ who have put their stamp on today’s nutritional paradigm. He has sought out the big names at the major institutions and the lesser lights laboring in obscurity, but who have made major contributions. He has read countless books and medical papers, and has crafted a highly readable, fully documented, authoritative history of diet and physiological primer of how and why the low-carb diet works.
I’m making copious notes as I read through this time and will post a more complete review when I’ve finished. The book starts by showing that by the late 1950s the medical establishment had pretty much concluded that following a low-carb diet was the most efficacious way for overweight people to lose excess fat and for normal weight people to stay thin. This idea came about as a consequence of a whole lot of clinical and laboratory research and wasn’t really in dispute. The first part of Taubes’ book tells how that (correct, as it turns out) conclusion came about and what has happened since to get us to the point where it is now academic heresy to recommend a low-carb diet.
Order your copy early through Amazon or your local book seller and prepare yourself for a great read. The book should hit the shelves in early to mid-September.