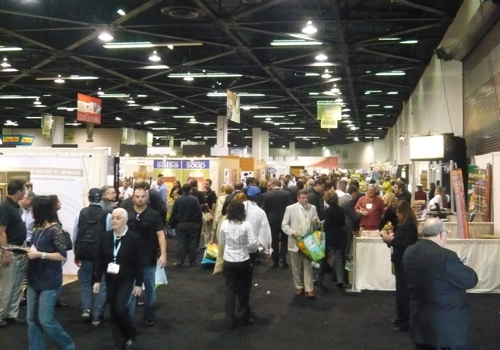 I have been dilatory in posting over the past few days and embarrassingly dilatory about approving comments.  I’m way, way behind, but I’ll get caught up ultimately.  So, if you have a comment doing time in comment Purgatory, don’t despair.  I will get to it.  Ultimately.
My excuse for not devoting my normal amount of attention to this blog is that I’ve been extremely busy as of late.  MD and I made a quick trip to Seattle to work on our world-changing project, then came back and spent a couple of days at the zoo that is Expo West (more about which momentarily), then the Seattle team came to us and we continued to work.  During all this, MD had a concert in which she had to perform Mozart’s Requiem and Lauridsen’s Lux Aeterna (my favorite piece of choral music) along with a couple of lesser pieces.  And tomorrow we drive back to Tahoe.  So, we’ve been busy little beavers and this blog has suffered.
Expo West has got to be the world’s largest natural foods expo.  It takes place every year at about this time in Anaheim.  And every year at about this time we drag ourselves to it.  The photo at the top of this blog represents one tiny little portion of this gathering.  To see how huge it is, take a look at the photo below of the map of the thing. 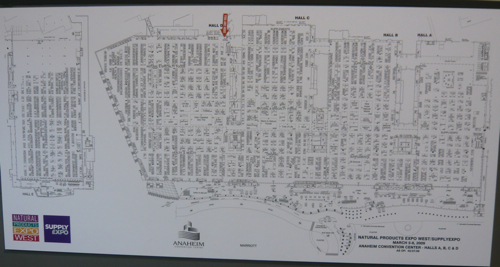 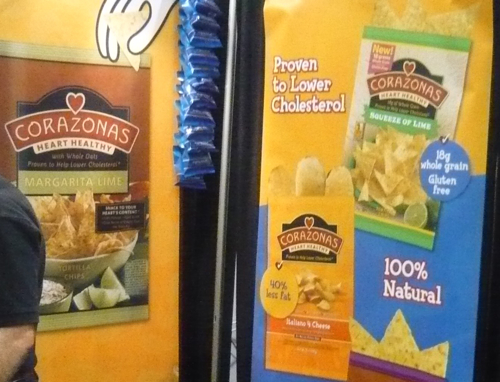 Meat and eggs
Yet another positive trend was the large increase in the number of vendors selling both fresh and processed meats.  Way more vendors than in the past.  And a large number selling eggs.  I saw many booths that had packets containing two hard boiled eggs and a little salt and pepper.  A good kind of fast food, if you ask me.
Resveratrol
I was expecting there to be a zillion people selling resveratrol, but there weren’t many.  In fact, I couldn’t find anyone selling just the raw stuff.  The only vendors I found selling it were selling their own proprietary versions in which resveratrol was mixed with other compounds.  Given all the press lately about resveratrol I was really surprised at how little there was.
Krill oil
All the krill oil sellers were there, and I spent a good amount of time with them.  They all had large booths, so it was apparent that krill oil has been very, very good to them all.  I finally learned all the distinctions between all the oils available and will be doing a post on them as soon as I have a little time to go over all the papers I’ve pulled to make sure I am accurate.
Vegetarian products
It’s hard to say, but if I had to bet, I would bet that there were slightly fewer this year than last.  They were still there, and they were still obnoxious, but just not in the numbers as before.  At least it appeared that way.
One of the things that constantly amazes me about Expo West and all the other natural food and health food shows I go to is how typically American all the people look who are selling this stuff.  They truly are a mirror of American.  The vast majority are overweight and they don’t look like the picture of health, yet there they are pimping products that are supposed to make the purchasers of them healthy.  If I looked like most of these people, I would hire someone who at least look lean, trim and healthy to man my booth, but these people don’t.  Most are definately not walking advertisements for their products.
Here are a couple of photos to show you what I mean. These pictures give you an idea of what a typical booth at Expo West looks like and typical people working these booths.  I didn’t pick these just because they were hawking vegetarian products, I picked them because I happened to have my camera at hand and they were right across the aisles from one another.  They were not out of the ordinary.  They look like most of the vendors. 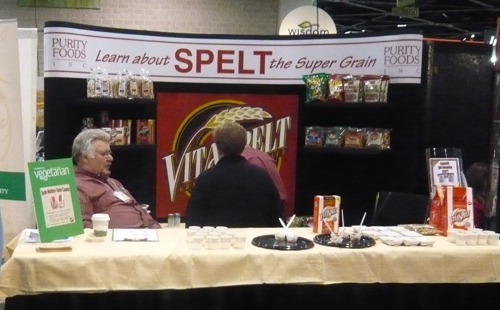 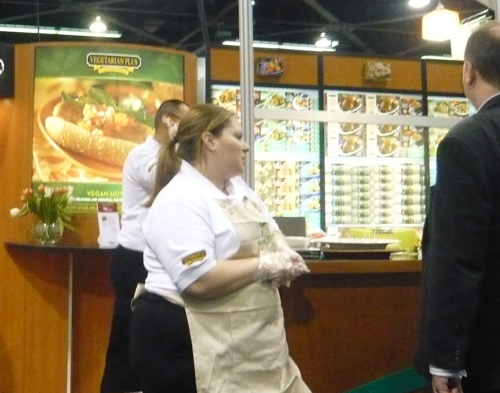 I plan to dragoon MD into doing most of the driving tomorrow so that I can catch up on my medical reading (as much as I can anyway while keeping a close eye on the road).  When we get home, I’ll get back on my normal schedule of posting.  Hang in there ’til then.