Readers of this blog will know that I love cookbooks and that my overflowing collection of them has long hence exceeded the linear feet of shelves I have in my kitchen, which, while not inconsiderable, were finite. No matter — there’s always floor space! And thus, this Christmas brought a new one that I already absolutely love! Nom Nom Paleo Food for Humans, its on time arrival delayed by the winter storms, appeared instead as a Boxing Day/Feast of Stephen gift. 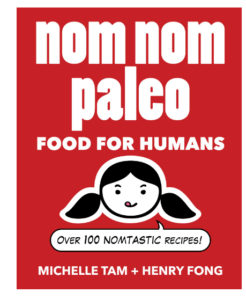 When it arrived, I spent most of the evening sitting by the fire, thumbing through it, reading the delightful narratives of the sort that have made Michelle Tam’s Nom Nom Paleo blog such a hit and perusing the collection of mouthwatering paleo recipes inside. With clear and concise instructions and gorgeous food porn shots, it makes you hungry just reading. The book is an enjoyable and approachable primer that proves it’s possible for a mom (and/or dad) to cook healthful, whole food paleo meals the whole family (even the pickiest kids) will love, while juggling the responsibilities of a full time professional career, writing a blog, and raising a family. Having met Michelle at the first Ancestral Health Symposium, I can attest that she is a ball of happy energy and that comes through loud and clear in this book.

Although a seemingly endless array of paleo cookbooks have come out in the last year–and many are quite good–this one is a real standout IMHO, because of its ‘real-world-ness’. Every funny anecdote screams: OK, this is a real mom cooking for a real family and she absolutely loves doing it! Best of all, you can see yourself doing it, and I think that was Michelle’s main goal; make cooking and eating real food a pleasure for the family. And, foodie that she is, her recipes are stand outs, too. Although it’s sometimes a mistake to conflate paleo or gluten free with low carb, these philosophies have much in common and I was very happy to see that but for a very few, none of the recipes in Food for Humans would cause metabolic havoc to any but the most seriously carb sensitive.

Among my favorites in this book are those using eggs. There’s a great one for a simple Salade Lyonnaise and this one, very reminiscent of a way my late sister did eggs for brunch, combining three of my favorite foods–eggs, mushrooms, and sausage–that I’ll share to give you an idea of the tasty offerings. 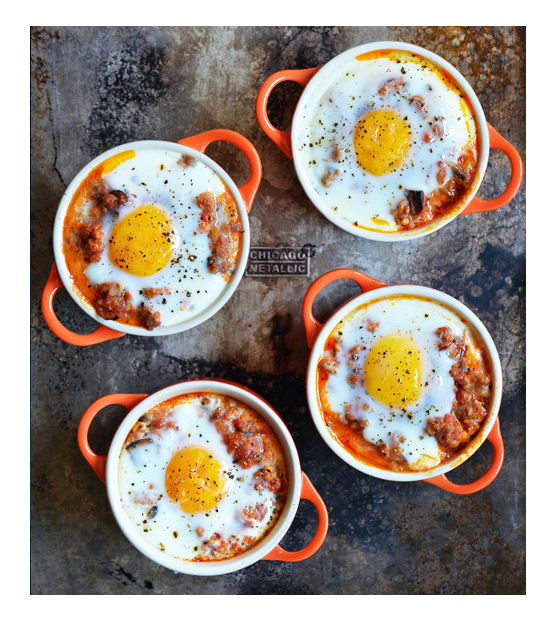 1. Preheat the oven to 400F, with the rack in the upper middle position.
2. Melt the fat in a large skillet over medium heat. Add the onions and saute until translucent, about 5 minutes. Toss in the mushrooms and season with salt and pepper. Cook for 5 minutes or until moisture released by the mushrooms evaporates.
3. Add the sausage to the pan, breaking it up with a spatula. Cook until it’s no longer pink. Pour the sauce onto the meat and add the red pepper flakes. Stir to combine the ingredients and cook until the sauce simmers.
4. Divide the saucy mixture into four 8-ounce ovenproof ramekins or mini cocottes. Make a small well in the center of each and crack an egg in it. Sprinkle salt and pepper on the eggs. Place the ramekins on a tray in the oven and bake until the eggs are done to your desired consistency, about 10 to 15 minutes. Serve immediately.

Whether it’s making Paleo Mayo, your own Sriracha, a big batch of Zoodles (zucchini noodles) or some of the most interesting deviled eggs I’ve ever seen, it’s all simple, fresh, flavorful food and definitely fit for humans, young or old.