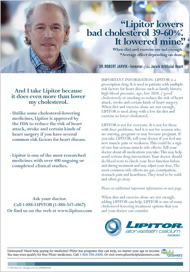 All I can say is thank God I morphed out of my regular medical practice and into nutritional medicine before the legalization of drug advertising on television. I watch very little TV – mainly NFL games, and usually only those I have a bet on – but even with the minimal amount I do watch I’m exposed to a ton of pharmaceutical ads.
These ads play on the relationship between patients and their doctors to make the drug company cash registers go ching ching ching.
Here is the way the system works. A person watching TV sees an ad for, say, a ‘new’ sleep medication promising a restful night’s sleep. This usually doesn’t prompt a call to the physician for a prescription, but during the next visit to the doc this person says, Hey Dr. So and So, I saw an ad for that new sleep medicine Lunesta. I’ve been having a little trouble sleeping, so could I give that a try? Most physicians will go ahead and write a prescription for that drug. Problem is, the drugs advertised on TV are typically much more expensive than the older drugs that may have gone off patent already and can be had as generics. And the new drugs aren’t any more efficacious than the old drugs. It doesn’t cost the doctor any money to write these prescriptions, so he/she will usually do it. The patient gets a medicine that costs him/her (or the insurance company) a lot more money for a drug that works no better than a cheaper one. So who wins in all this? The drug company, of course.
Any medication you see advertised on television has a less expensive counterpart out there. And typically the less expensive counterpart has had many more years of patient experience without problems or it would have been pulled from the market, so it can be considered even safer as well.
Consumer Reports has started what they say will be a series of attacks on these drug ads. Their first venture is a jab at a drug ad we’ve all seen for the heartbreak of restless leg syndrome. (I’m not always a big fan of Consumer Reports. They do okay when their evaluating toasters to see which is best because there are specific tests the toasters can be put to in an effort to rank them. Where CR gets into trouble is when they start rating various diets using yardsticks that have no scientific merit.)
Link to the video. Sadly, they’ll probably never do one of these debunkings of a statin drug ad.
Warning. The woman who is the CR spokesperson in this video has one of the most annoying voices in the history of video. It has a teenspeak quality to it that just about drove me from the computer. I could barely get the thing watched. But that’s just me. It may not bother others.
While we’re on the subject of television drug advertising, have you been wondering why you’re seeing that Gollum-y Dr. Robert Jarvik touting Lipitor every time you turn on TV, pick up a paper or magazine or even look at the news online? Because the pharmaceutical giant Pfizer is in a blind panic. The New York Times tells why.

Lipitor and other cholesterol-lowering drugs, sometimes called statins, are the largest drug class, with spending of $22 billion last year in the United States alone. And they have been researched more thoroughly than any other group of drugs, making head-to-head comparisons easier.
Many doctors have come to see simvastatin as a viable substitute for Lipitor. Studies show that at commonly prescribed doses Lipitor and simvastatin are equally effective at reducing LDL cholesterol, the so-called bad cholesterol.
A big difference is that Lipitor costs $2.50 to $3 a day, while simvastatin sells for 75 cents to $1 a day at most retail pharmacies, and as little as 10 cents a day at discount pharmacies like Costco’s.
Each month, doctors with patients on Lipitor are switching tens of thousands of them to simvastatin. And simvastatin is also taking a growing share of the market for new patients who need a cholesterol drug. “Simvastatin is much less expensive to society over all and to patients,” said Dr. Thomas H. Lee Jr., a prominent cardiologist. “If you put patients on generics,” he said, “the chances that they’re taking their medications six months later are higher than on a brand name drug. I think that a few hundred dollars a year does matter.”

Simvistatin (Zocor) went off patent last year, you see, so it is now available as the generic. Pfizer, which makes Lipitor, is worried that many physicians will switch their patients from Lipitor to simvistatin, a move that could cost Pfizer hundreds of millions of dollars. (And save patients and insurance companies and therefor all of us the same hundreds of millions of dollars per year.) So, they are blasting the airwaves and print wherever and whenever they can to try to maintain loyalty. I guess we’ll see if it works.
I have a better and even less expensive solution: quit writing prescriptions for statins altogether. There is no real proof that they work for anyone except males under the age of 65 who have already had heart problems. And even then, they work minimally. So if you don’t fall into that category why spend even 75 cents per day for a drug that will do you no good and possibly great harm? Discuss it with your physician.