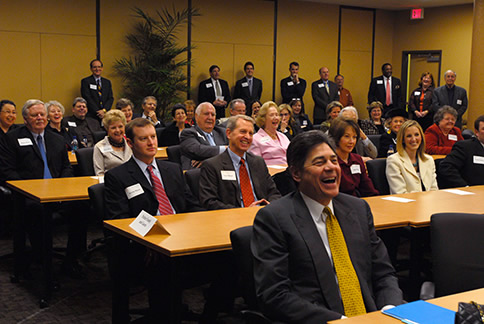 We’re not told if this correlation holds irrespective of which diet the subjects were following or if these were the numbers while they were following the Atkins diet. From the wording of the abstract one would have to think that these values were reported for all the diets. If so, then the researchers have extrapolated from these numbers that the Atkins diet causes more endothelial dysfunction simply because it contains more fat and certainly more saturated fat than the other two diets.
Based on the abstract we find that

In the absence of weight loss, the high fat Atkins diet is associated with increased LDL-C, reduced endothelial vasoreactivity and increased expression of biomarkers of atherothrombosis. As such, these data suggest that isocaloric conversion to the Atkins diet may negatively impact cardiovascular health as compared to the South Beach or Ornish Diet.

Now, let’s probe a little deeper. And we don’t have to get very deep to see a major flaw in this study.
Before we get to the major flaw, though, let’s look at the LDL changes. As far as I’m concerned, they are a big Ho Hum. I mean, who really cares? How many studies do we have to look at to know that when you cut fat from the diet LDL levels decline? We already have dozens showing us this same finding. Dozens of other studies show us that when fat, particularly saturated fat, is increased in the diet that not only do LDL levels rise a little but HDL levels rise a lot. (I posted about this in the past.) So what little risk we might seem to accrue because of increased LDL levels is more than offset by the greater increase in HDL levels. It even gets better. The majority of studies have shown that when LDL levels increase due to high-saturated-fat, low-carb diets, the LDL particle size increases, making the LDL non-atherogenic. And while LDL levels fall with low-fat, high-carbohydrate diets, the LDL particle size decreases and becomes the small, dense type, which is highly associated with cardiovascular disease.
So, this study tells us that when the subjects went on the Atkins diet their lipid profiles actually improved as compared to the other two diets. Why didn’t the researchers just say that? One wonders. One also wonders why – if they went to the trouble and expense to check ICAM2 and the other markers of inflammation – they didn’t bother to check HDL levels or LDL particle size, especially since LDL particle size is lipid parameter that has the strongest correlation to the development of cardiovascular disease.
Back to the major flaw. The abstract doesn’t say how much these subjects weighed. So we can only assume. Let’s assume that they were average weight and required 24oo kcal per day to maintain their average weight. While these subjects were on the Atkins diet part of the study the abstract tells us that they were consuming 50 percent of their calories as fat. Let’s think about this for a minute and do a few back of the envelope calculations. Fifty percent of 2400 calories is 1200 calories. So 1200 calories were fat and 1200 calories were other than fat. Since other than fat means carbs and protein, that means that the other 1200 calories were divided between these two macronutrients. If we assume that 20 percent of calories were protein that calculates out to about 120 grams of protein per day, which is a fair amount and probably more than they actually got. But let’s assume 20 percent. That leaves 30 percent of calories as carbohydrate. Thirty percent of 2400 kcal comes out to 720 calories as carb. And since a gram of carb is 4 calories, dividing it out gives us 720/4 or 180 grams of carb per day. Does that sound like the Atkins diet to you?
Let’s give the researchers the benefit of the doubt and say that they had the subjects on 30 percent protein (180 grams), which I doubt because they would have been scared to death to give someone 180 grams of protein. But let’s assume they bucked up and did it. Running the same calculations on 20 percent of carbs gives us 120 grams of carbs per day – that’s a full 24 teaspoons of sugar’s worth of carbohydrates per day. Or two potatoes and a serving of pasta. Is that the Atkins diet?
See what I mean. It was a flawed study. I already linked to this post above, but it discusses the same issues, i.e., blaming a lab finding on saturated fat when the diet is full of carbs.
What do we care that a low-carb diet showed an increase in inflammation and worsening endothelial function when what was tested wasn’t really a low-carb diet?
In summary: no complete study, no peer review and no Atkins diet. Yet it made the news big time.
Now that you know the story, go back and read the press report of this oral report of a poster. See if your take home message is any different now.
Oh, and one other thing. According to the abstract the study started out with 26 subjects, but only 18 completed it. That’s a dropout rate of over 30 percent. One wonders why these subjects dropped out? And from which dietary protocol? It would be interesting to know, but I can make a pretty good guess.