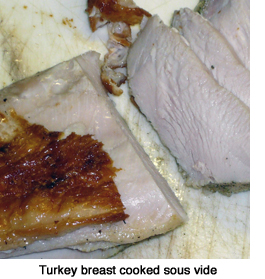 Last Thursday was Thanksgiving, and in the words of Arlo Guthrie, we had a Thansgivin dinner that couldnt be beat.  Along with all the traditional Thanksgiving fare at Casa Eades, we had dueling turkeys: one cooked the traditional way and one cooked sous vide.  And let me tell you, there was no comparison.  Im not saying this just because weve got a sous vide cooker for sale, either.  Ive never had turkey that tasted so good.  Because Im not really a big fan of turkey, I eat turkey on Thanksgiving, and Thanksgiving only.  I found our sous vide turkey to be so good, because it didnt really taste like turkey.  At least not turkey cooked in the traditional way that Im used to tasting.  It was like a different meat entirely.

MD has posted on how she cooked both turkeys on her blog and on the Sous Vide Supreme blog, giving precise recipes for both.  As you can see when you read the posts, cooking a turkey the traditional way is a major pain (both figuratively and literally).  Its just not worth it when the taste and texture outcome is so much better using sous vide.  Especially since the sous vide method is so much easier and less time consuming. Vastly easier, in fact.

Lest you think this is another post cleverly designed to promote and sell the Sous Vide Supreme, let me disabuse you of that notion.  Im going to show you how you can try the sous vide method at home without having to purchase a machine to see if its really for you.

Not long ago I wrote a post on how MD and I came up with the idea for what ultimately became the Sous Vide Supreme.  We wanted to try cooking sous vide, but there were no sous vide units available for the home cook, and we werent about to fork over $1500 for a commercial unit just to give the technique a try.  So, we cobbled together a Rube Goldberg kind of set up and tried it out.

I went back and pulled some of the photos I took of our contraption, which was made of a stock pot, a steaming basket turned upside down, and a candy thermometer.  And, the most important piece of 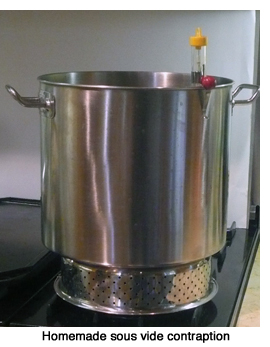 equipment of all: constant attention.

The secret of cooking sous vide is the maintenance of a constant temperature over the cooking period.  Since most things are cooked sous vide at a significantly lower temperature than 212F/100C (the temp at which water boils), you cant put the container directly on the stove even with the burner on its lowest setting.  The lowest setting is typically for simmering, which holds the temp right at the boiling point.  When we were trying to set up our first try, we experimented with several different ways to get the stock pot high enough up off the flame of our gas stove so that we could get the low temperatures we needed.  We found that the steaming basket (made to set inside a pan) turned upside down gave us the height we needed given the flame on our stove.

Sous vide cooking requires that the temperature be maintained precisely for long periods of time, sometimes up to 72 hours for, say, fall-off-the-bones beef ribs.  On the Sous Vide Supreme, you simply set the temp and walk away.  Its not so easy with a homemade unit.  Youve got to monitor it closely because temperature fluctuations of even a degree or two will make a difference in your outcome for many foods.  One of the ways you keep the temp where you want it is to use an important piece of equipment not pictured in the photo above: a pitcher of ice water.  You watch the temp carefully – you dont have to stand there and watch it minute by minute – checking the candy thermometer every few minutes or so.  If the temp starts to drift up a little (the most common thing), you need to pour in a tiny bit of ice water to bring it down.

Since youve got to stay on top of it, its best that you limit your cooking in a homemade device to foods that dont require a long time in the bath.  Which means youve got to stick with good-quality beef cuts such as rib eye, New York strips or tenderloin, chicken breasts, salmon, turkey breast, etc.  If you read MDs post on cooking our Thanksgiving turkey, youll notice that she cooked the breast for 2.5 hours at 140F and the dark meat at 176F for eight hours.  If youve got a Sous Vide Supreme, you can stick the dark meat in, set it for 176F and get it out eight hours later.  If youre cooking it using the homemade device, youre going to be standing close by watching it for eight hours.  Since you probably dont want to spend eight hours fiddling with it, I would avoid trying the dark meat of a turkey as your first outing in the homemade device.  Try the breast or, better yet, some salmon or even steak, lamb or pork chops.  You want to minimize the amount of time you have to remain vigilant in your temp watching.

Let me give you a couple of never-fail recipes so you can give it a try. And let me say that these were not the same recipes we used the first time we tried our rigged-up machine.  These are recipes that weve developed after a lot of bad experiences.  We suffered them so you dont have to.

The first thing you should try is chicken breast.  Why?  Because its easy and because the taste difference between a chicken breast cooked sous vide and one cooked any other way is so huge that you can really experience the virtue of cooking this way.

Take your chicken breasts (they can be skinless or with skins in place) and brine for for hours in an 8 percent brine.  You make an 8 percent brine by putting five tablespoons of salt in one quart of water.  Make your brine, put the breasts in, and put in the fridge for four hours.

Pull the breasts from the brine, rinse with fresh water and pat dry.

Put each breast into a food-grade plastic bag along with a big pat of butter.  (If you like it, you can add some cracked pepper or herbs to the bag at this stage)

Vacuum seal the bags with a Food Saver or one of the little hand vacuum pumps.  (You can even press all the air out with your fingers if you dont have a pump of any kind, though you risk having your meat float and cook unevenly–and perhaps incompletely, which isnt good with poultry–if any significant amount of air remains.)

Bring your sous vide machine to 140F and put the bags in.  Watch it like a hawk (assuming youre using your homemade setup) to maintain that temp for about 1.5 hours.

Remove the bags, open and dump out the breasts.  They wont look particularly appetizing, especially if they have been cooked with the skins on.  If the breasts are skinless, you can actually slice and eat just as they come out of the bag, and theyll taste something like poached chicken, but infinitely better. But they are better yet if you sear them first to give them a little color and caramelized flavor.

To sear them, you need to put a stainless or cast iron skillet on the stove at the highest temperature you can get.  Gas or electric both work, just put the burner on its highest setting.

Leave the empty skillet on the hot burner for about ten minutes.

Add some clarified butter (ghee), which will sizzle and steam like crazy if the skillet is hot enough.

Put the breasts in the hot skillet and turn from side to side about every 30 seconds with tongs until you get a nice golden brown exterior.

Remove and eat.  You wont be disappointed.

You can also try steak.  Heres how we did it last night.

Get a nice cut of steak, a rib eye or porterhouse or something tender.  I wouldnt use grass-fed beef for this experiment because you have to cook it too long to get it nice and tender.  If you use a regular grocery-store steak that isnt too think – one inch, say – you can get by cooking for only 40 minutes to get it perfectly medium rare.

MD puts a sprinkling of sea salt on each side, a few turns of the pepper mill and a little garlic powder then puts each steak in a food-grade plastic bag and vacuum seals it.

Heat your water bath to 135F, put the bagged steaks in the bath, and watch carefully.

Pull the steaks out after 40 minutes and let them sit at room temperature for 5 or 10 minutes to drop their internal temperature just a bit.  Remove them from the bags and pat dry.  (The patting dry is actually an important part of the process.)

Do the deal with the skillet as described above for the chicken breasts.  Get it hot, add the clarified butter, then sear the steaks. 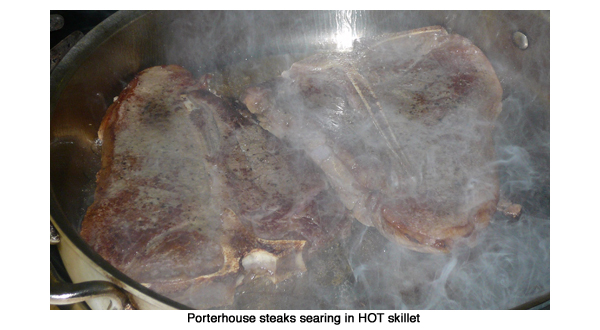 Sear them on each side no longer than about 20 seconds.  If you want, you can flip them around a bit from side to side.  You should even hit the edges of the steak with the hot skillet as well so that they are seared all around and the fat on the edges gets a nice color. 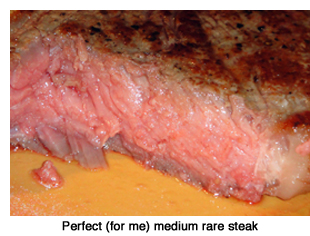 You can see from the photo on the right how the interior looks.  Perfectly medium rare from side to side with a tiny layer of caramelization on the surface.  Must be tasted to be believed.

Several of your fellow readers have used the sous vide method and posted on it.  You can read their posts here, here, here and here.

One of the nice (and sometimes aggravating) things about the sous vide method of cooking is its precision.  If you dont like your steaks at 135F, try them at 130F or 140F.  Or even at 133F.  You can get as precise as you want.  The meat at each temperature will be a little different than when cooked a degree or two hotter or cooler.  It takes some diddling with and experimentation to find the temperature that works best for you.