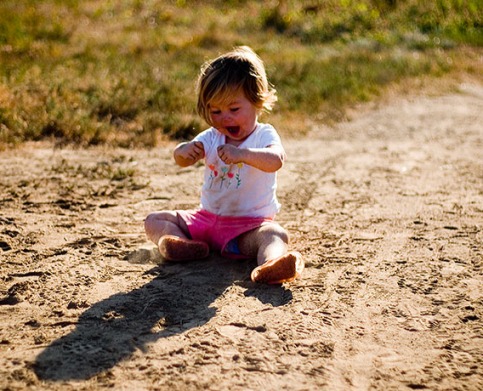 Yesterday I went with the eldest son to take the eldest grandson (EG) to his swimming lesson. MD was with the daughter-in-law taking the youngest grandson to his soccer game. It was a typical modern regimented kid Saturday. While I was observing the EG in the throes of his lesson I noticed another manifestation of modern child-rearing behavior. A young family in the chairs in front of me were getting their kids, who had just finished their swimming lessons, packed up and ready to leave.
The kids, both boys, looked to be about 7 and 4. As the parents were gathering all the towels, goggles, and other paraphernalia, the youngest kid was taking his cookie out of the little sack that it came in and dropped it. The cookie hit the indoor/outdoor carpet that covers the floor in the observation area and broke into four or five pieces. The kid hurriedly began to pick them up and get them back into the sack, but was spotted by the sharp-eyed mother.
“No,” she shrieked, “you know the rules. We don’t eat food that has been on the floor.” She gathered up all the pieces and threw them away as the kid stood there looking hangdog.
The mother acted appropriately, but for all the wrong reasons.
At this particular swimming school when the kids do a good job they are rewarded with a big sugar cookie. In my opinion this is not the way to reward children. They come to associate the sugar-fat taste that is so addicting with good performance. I think we should do all that is possible to disassociate sweets with any kind of reward. So, the mother acted in the best interests of her son, or at least in the best interest of her son’s pancreas by tossing the shattered cookie.
But she did a disservice to his immune system.
Why?
Because kids need to eat a little dirt.
In this case, I doubt that the cookie would have gotten all that dirty. The indoor/outdoor carpet had been trod by a thousand chlorine-y feet fresh from the pool, so I doubt that there was a germ within a hundred feet. But had the cookie fallen on the ground or on the floor of the kids house or at school, it would have been okay to eat, blood sugar considerations aside.
Why? Because kids need the germs to fine tune their developing immune systems.
We as a species evolved in the presence of a zillion bacteria, parasites and fungi. As our immune systems developed, they did so in with all this fauna on board. Now we lived in a squeaky clean world. No one in developed countries ever has parasites except for the occasional case of pin worms or head lice brought home from school. Most kids are vaccinated for all of the common childhood diseases and taken to the doctor for antibiotics at the least sign of a sniffle.
Endotoxins are components of the cell walls of various bacteria and are found in dirt and dust everywhere, but especially in the dirt of farms and barnyards. Exposure to endotoxins during infancy and youth is associated with much less trouble with allergies later in life. Kids who grow up in spotless homes tend to have more allergies than those who grow up on farms. Kids who have pets don’t develop asthma or as many allergies as kids who grow up without pets. First born kids today have more allergies than those later in the birth order. Mothers are able to keep the house clean and are ever vigilant for dirt with the first kid; by the time the others come along, she is a little overwhelmed and the house isn’t quite as neat. The kids after the first born are the beneficiaries of mom’s fatigue.
Why does exposure to endotoxins help the immune system develop properly? No one knows for sure, but it is theorized that if the developing immune system doesn’t have enough to stimulate it, it turns on pollen, house dust mite and other common allergens as well as , the latter of which can cause auto-immune disorders. I like to think of the immune system of kids in neat-as-a-pin homes as being like the Highland Park police.
Highland Park is an upscale area of Dallas that has no crime to speak of. The notorius Highland Park police, since they have no crime to fight, turn on the normal citizens and ticket them for the most nothing infractions. If you come to a rolling stop at a stop sign in Highland Park they call out the swat team.
It’s much the same with the developing immune system. If there is plenty of endotoxin around, the immune system is kept busy dealing with it. If there isn’t, the immune system starts going after stuff it shouldn’t.
So, whenever you see kids drop some food on the floor, just pick it up, knock off the visible dirt, and let them eat it. Visit a farm and let your kids play in the dirt. Don’t admonish them to wash their hands every five seconds. Let ’em be the nasty little kids nature has intended for them to be. Their immune systems will thank you.