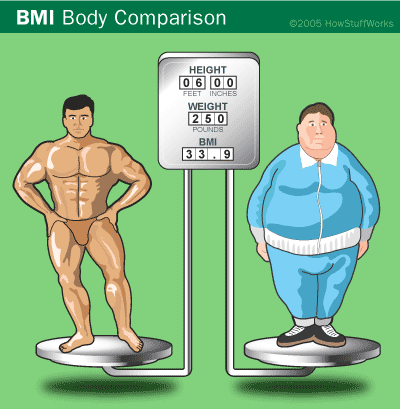 There is an old joke that goes something like this:
Question: What is Mozart doing in his grave right now?
Answer: De-composing.
The same question could be asked of the living right now who are working hard on their diets and seeming to go nowhere body weight-wise.
Question: What’s happening right now? Why am I not losing weight?
Answer: You’re Re-composing.
As you can see from the picture above, body composition matters a lot.  It’s not the particularly the weight you carry as much as how it is distributed that counts.  As I’m forever asking my female patients, What difference does it make if you weigh 200 pounds if you’re wearing a size 4?  Although that situation is unlikely, they get the point.
A soon-to-be-published study by Donald Layman and his team at the University of Illinois demonstrates this phenomenon nicely.  And shows that by increasing protein intake – even while keeping carb intake much higher than I would recommend – increases fat loss while increasing muscle and lean tissue mass.
Here is how the study was set up.
One-hundred thirty overweight men (58) and women (72) between the ages of 40 and 56 were recruited into the study.  None of the subjects smoked, took cholesterol-lowering drugs or had any medical condition that might affect the outcome of the study.  In other words, the study subjects were relatively healthy overweight middle aged people.
These subjects were randomized into two groups.  One group was started on a diet (PRO) containing 1.6 gm protein per kg body weight per day and under 170 g carbohydrate per day.  The other group went on a diet (CHO) composed of 0.8 g protein per kg per day (the minimum Recommended Daily Allowance (RDA) for protein) and over 220 g carbohydrate per day.
The diets for both groups were formulated to be equal in energy with  1900 kcal/day provided for males and 1700 kcal/day for females.  Total fat content was the same in both the PRO and CHO diets.

Diet differences between groups were designed to reflect direct substitution of foods in the protein groups (meat, dairy, eggs, and nuts) for foods with high-carbohydrate content (breads, rice, cereals, pasta, and potatoes).  The education guidelines for the CHO group followed the USDA Food Guide Pyramid and emphasized restricting dietary fat and cholesterol with use of whole-grain breads, rice, cereals, and pasta.  For the PRO group, the education guidelines emphasized use of high-quality, low-fat proteins including lean meats, reduced-fat dairly, and eggs or egg substitutes.  Both diets included 5 vegetable servings/d and 2-3 fruit servings/d.

This study is unusual in that it provided a comprehensive nutritional education program along with an intense degree of nutritional monitoring throughout the 12 months of the study.  Most nutritional studies give the subjects a lead in lecture or series of lectures, then pretty much leave them alone.  To help ensure compliance, these researchers met with the subjects weekly throughout the study.
Subjects were evaluated at the start, after a 4 month period of active weight loss and finally after an 8 month maintenance period.  The entire length of the study was 12 months.
At the end of the 4 month weight-loss period, subjects on the PRO diet fared substantially better than those on the CHO diet.  Fewer people in the PRO group had dropped out of the study, and those who remained experienced an increase in HDL-cholesterol and a substantial reduction in triglycerides as compared to those on the CHO diet.  Those subjects on the CHO diet had greater reduction in LDL-cholesterol than did those following the PRO diet, but those changes didn’t old over the full 12 months.
Most interesting was the finding that although both groups lost equivalent amounts of weight over the first 4 months (actually, the PRO group lost a little more, but not a statistically significant amount), those in the PRO group lost 22 percent more fat than the subjects in the CHO group.  Since weight was essentially the same in both groups, those in the PRO group maintained or lost less lean mass while losing fat.  Which means that, despite the weight being the same, those in the PRO group ended up smaller than those in the CHO group.
As I’m sure everyone knows, fat is lighter than muscle.  If you trade a pound of muscle for a pound of fat, the scales don’t change.  But size does change because a given weight of fat occupies much more

volume than the same weight of muscle.  You can see from the photo to the right how much less space 5 pounds of muscle take up than does 5 pounds of fat.  Plus, muscle is more metabolically active in that it burns more calories, and it actually does something for you.  Muscle makes you stronger; fat just weighs you down.
I know that many female readers will not want to gain extra muscle.  They shouldn’t worry, however, because in the absence of exogenous anabolic steroids women won’t become ‘muscle bound’ or non-feminine appearing.  What generally happens is that the muscle replaces fat within the muscle.  We’ve all seen marbling in beef, which is fat within the muscle tissue.  With the extra protein, new muscle replaces this fat, and the muscle may even become a little smaller in females while at the same time becoming more dense and stronger.
Let’s take a look at a couple of graphs that demonstrate nicely the difference in fat loss with greater protein intake, even in the face of what I consider way too many carbs.
The graph on the top shows the difference in fat loss between those PRO and CHO subjects who completed the entire 12 months of the study irrespective of how much weight they lost.
The bottom graph shows the difference in fat loss in those who were able to maintain a weight loss of at least 10 percent of their starting weights.
As you can see, the fat loss in those in the PRO group were substantially greater than those in the CHO group even though both groups were on an equivalent number of calories. 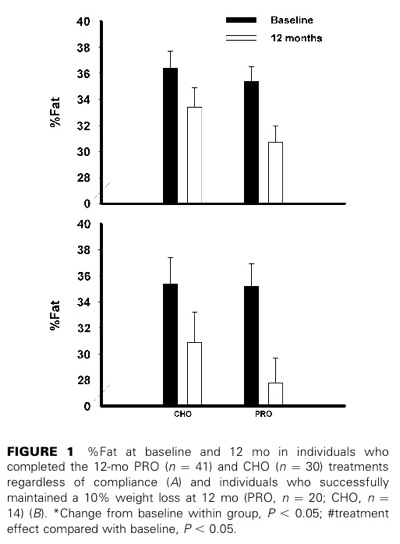 The series of graphs to the right show what happened to lipid values in the subjects in both groups. 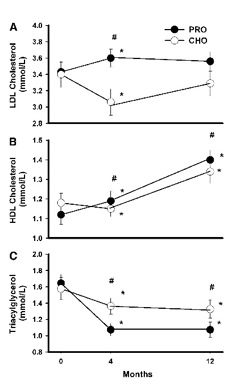 HDL-cholesterol went up more and stayed up in the PRO subjects.  Triglycerides went down more and stayed down in the PRO subjects.  Subjects following the CHO protocol tended to have a reduction in LDL-cholesterol as compared to those in the PRO group, but as the study continued, the LDL-cholesterol began to return to pre-study levels.  This finding has been replicated in many other studies.  A high-carb, low-fat diet reduces LDL in the short term, but the changes don’t last.
The authors of this study made some interesting points in the discussion part of the paper.

Across all 3 analyses [the data was analyzed in three different ways], the PRO group averaged ~21% greater weight loss and 27% greater fat loss than the CHO group.  Further, irrespective of the amount of weight lost, participants in the PRO group obtained greater improvements in body composition as reflected by greater FM [fat mass] loss and attenuated relative lean mass loss.

In addition to the beneficial effects of the PRO diet for changes in body composition, more participants in the PRO group completed the study (64%) than in the CHO group (45%) and attained ≥ 10% weight loss (31 vs 21%, respectively).  These findings demonstrate greater compliance with a moderate PRO diet designed within the DRI [Daily Recommended Intake] guidelines for macronutrients for long-term weight management than the CHO diets often advocated for weight loss.

This is information you can use with friends and family who are, for whatever reason, adverse to going on a real low-carb diet.  The beauty of this particular study is that all the protein, carb and fat recommendations are within the government-approved RDAs.  The PRO group had a protein intake that was at the upper end of the RDA for protein and carb at an amount that was far from the lower end of the RDA for carbs.  (Of course those of us in the know realize that there is no lower end requirement for carbs  – many people get by with zero or close to zero carbs.  But we’re talking the government here. So, nuff said.)  What this means is that you can encourage friends and family to go ahead and eat a government-approved diet yet still get some of the benefits of a semi-sort-of low-carb diet.  A real win win.

Improvements in body composition, including reducing body fat and maintenance of lean tissue, are critical for prevention of weight regain and long-term health status.  Evidence is accumulating that the RDA for protein is inadequate to maintain muscle mass in adults during aging, with a physically inactive lifestyle, or during energy restriction for weight loss.  The current RDA for protein represents the minimum protein needs for healthy young adults with adequate energy intakes.  During weight loss, energy restriction increases the protein needed to maintain muscle mass and protein needs expressed as percentage of the reduced energy intake nearly double.

Just to give you an idea of the amount of protein we’re talking about here, let’s take the so-called average person who weighs 70 kg (154 lbs) and calculate daily protein requirements based on the protocol of this study.  70 kg  X 1.6 g/kg/day = 112 gm protein per day.
If you want to use pounds instead of kilograms, use 0.73 gm protein per pound per day.  If you weigh 200 lbs, then the calculation would be 200 lbs X 0.73 gm/lb/day = 146 gm protein per day.  Since meat contains about 7 gm protein per ounce, this 146 gm could be gotten in about 21 ounces of meat per day.  So we’re not talking about a small amount.
I’ll leave you with the conclusions of the authors of this study, with which I mostly concur.

The findings of the current study demonstrate that although energy deficit is the major factor for body weight loss, the macronutrient composition affects body composition, blood lipids, and long term compliance.  Specifically, a PRO diet with protein at the upper end and carbohydrates at the lower end of the AMDR [Acceptable Macronutrient Intake Range] is more effective for reducing % Fat and improving dyslipidemia.

I can only add that were the protein kept high (along with the fat) and the carbs slashed to around 30-50 gm per day, the results would have been even more impressive.