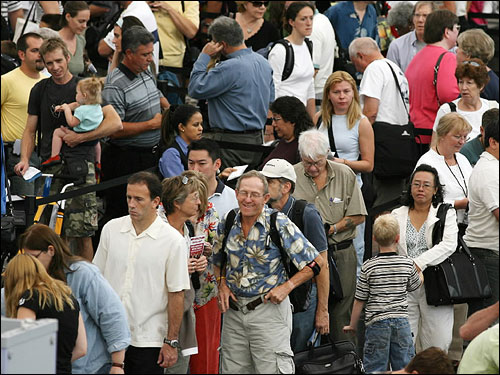 Security lines at the Denver airport.
I posted a couple of months ago on the hassle MD and I went through to fly out of Denver. There were giant piles of all kinds of shampoos, liquid soaps, drinking water, shaving cream, deodorants and all the other stuff that we worry will blow planes out of the sky. Yet despite the guardians of our safety never missing a bottle of aftershave, in a test over 90 percent of actual bomb material made it through without a hitch.

Undercover agents were able to slip bombs and IEDs past the Transport Security Agency checkpoint at Denver airport 90 percent of the time. Last time I was in Denver, the eagle-eyed agent was able to spot and confiscate my toothpaste, and of course, my suitcase arrived damaged, contents filthy, having been pawed at by a TSA goon and then improperly closed. These eagle-eyed guardians of freedom are so obsessed with making sure that we’re all sharing our foot-funguses with each other on while our shoes go through the X-ray machine that they can’t actually find actual bombs.

Really makes me want to put up with all the hassle without a fuss.