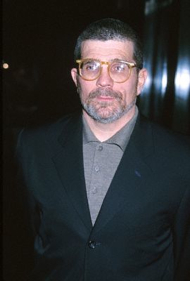 David Mamet
A couple of weeks ago David Mamet, prolific author, screen writer, director, and playwright, wrote an essay in The Village Voice about his conversion from a “brain-dead liberal” to a sort of conservative. After a lifetime of running with the far-left Hollywood crowd and promoting their brand of liberalism, Mamet slowly began to realize that life as he actually experienced it conflicted with his political beliefs creating major cognitive dissonance.

I took the liberal view for many decades, but I believe I have changed my mind.
As a child of the ’60s, I accepted as an article of faith that government is corrupt, that business is exploitative, and that people are generally good at heart.
These cherished precepts had, over the years, become ingrained as increasingly impracticable prejudices. Why do I say impracticable? Because although I still held these beliefs, I no longer applied them in my life. How do I know? My wife informed me. We were riding along and listening to NPR. I felt my facial muscles tightening, and the words beginning to form in my mind: Shut the f**k up. “?” she prompted. And her terse, elegant summation, as always, awakened me to a deeper truth: I had been listening to NPR and reading various organs of national opinion for years, wonder and rage contending for pride of place. Further: I found I had been—rather charmingly, I thought—referring to myself for years as “a brain-dead liberal,” and to NPR as “National Palestinian Radio.”
This is, to me, the synthesis of this worldview with which I now found myself disenchanted: that everything is always wrong.
But in my life, a brief review revealed, everything was not always wrong, and neither was nor is always wrong in the community in which I live, or in my country. Further, it was not always wrong in previous communities in which I lived, and among the various and mobile classes of which I was at various times a part.
And, I wondered, how could I have spent decades thinking that I thought everything was always wrong at the same time that I thought I thought that people were basically good at heart? Which was it? I began to question what I actually thought and found that I do not think that people are basically good at heart; indeed, that view of human nature has both prompted and informed my writing for the last 40 years. I think that people, in circumstances of stress, can behave like swine, and that this, indeed, is not only a fit subject, but the only subject, of drama.
I’d observed that lust, greed, envy, sloth, and their pals are giving the world a good run for its money, but that nonetheless, people in general seem to get from day to day; and that we in the United States get from day to day under rather wonderful and privileged circumstances—that we are not and never have been the villains that some of the world and some of our citizens make us out to be, but that we are a confection of normal (greedy, lustful, duplicitous, corrupt, inspired—in short, human) individuals living under a spectacularly effective compact called the Constitution, and lucky to get it.

As discussed in Mistakes Were Made, it’s difficult to hold two opposing beliefs, and most people try to resolve their dissonance by explaining away anything that conflicts with their predominant belief. It is extremely difficult and therefore unusual when someone renounces an entrenched set of beliefs held for a lifetime, and especially when done as Mamet did in such a public way.
People generally start out with no real political ideology. As the authors of Mistakes Were Made would put it, people start at the top of a pyramid of belief. Something tips them one way or another and they head down a particular path. As they build up speed heading toward the base of the pyramid confirmation bias kicks in and speeds them along their way. They tend to associate with people who believe the same as they; they read editorialists who confirm their own beliefs; they troll the blogs, read the books, listen to the talk radio programs and watch opinion TV shows that are congruent with their own beliefs. By the time they get to the bottom of the opinion pyramid, they can’t conceive of anyone holding a different opinion. They may have a friend or sibling who traveled down the opposite side of the pyramid and holds opposing views that have been seasoned by marinating in another type of confirmation bias, and this friend or sibling is regarded as, at best, misguided, at worst, stupid or evil. And this friend or sibling feels the same about them.
It is most difficult to spend the time wallowing in confirmation bias for years and reaching the bottom of the pyramid only to find that your entrenched opinions conflict with your observations. Most people try to make sense of their observations by interpreting them in such a way to be compatible with their beliefs. It takes a strong person to be able to step up and say I can’t reconcile what I see with what I believe, so I need to change my beliefs to conform with what I see instead of vice verse. And to do it publicly as Mamet has done takes a lot of gumption. I’ve got to take my hat off to him.

I found not only that I didn’t trust the current government (that, to me, was no surprise), but that an impartial review revealed that the faults of this president—whom I, a good liberal, considered a monster—were little different from those of a president whom I revered.
Bush got us into Iraq, JFK into Vietnam. Bush stole the election in Florida; Kennedy stole his in Chicago. Bush outed a CIA agent; Kennedy left hundreds of them to die in the surf at the Bay of Pigs. Bush lied about his military service; Kennedy accepted a Pulitzer Prize for a book written by Ted Sorenson. Bush was in bed with the Saudis, Kennedy with the Mafia. Oh.
And I began to question my hatred for “the Corporations”—the hatred of which, I found, was but the flip side of my hunger for those goods and services they provide and without which we could not live.

I decided a while back to leave politics off this blog, and when I first read this piece it didn’t occur to me to post about it. But then I got to thinking about it in terms Mistakes Were Made, and I realized how difficult it is to make a giant switch over as Mamet has done, and make it so publicly. I thought it would be illustrative of the steps someone goes through to make such a switch, and since most of the world doesn’t read The Village Voice, I figured I would put it up for all to read.
I suspect that most of us have gone through a similar process in making the conversion to low-carb from low-fat. We’ve had to overcome the disbelief of friends and family that we could possible do something so stupid and dangerous as go on a low-carb diet. But we saw the results, and we were able to believe more in what we saw and experienced than in what we believed to be true, so we went with reality. Our friends haven’t made the leap and they all regard our dietary decisions in much the same way that the Hollywood crown must regard Mamet’s.
I don’t necessarily hold Mamet’s political views, but I do enjoy a lot of his writing. I especially enjoyed Bambi verses Godzilla, his book on the movie business, which is, in my opinion, a masterpiece. It is great reading for anyone wanting a critical insider’s view of what goes on in the making of motion pictures. Plus it gives a lot of tips on old movies, many of which MD and I have rented and enjoyed.
I’ll be happy to put up any comments that come through on this post, but I’m not going to engage in political debate. As I said, this was Mamet’s conversion, not mine. I’m simply posting it to show how someone goes through the thought processes to overcome a long-held point of view. If you want to argue about Mamet’s reasoning, write Mamet and argue with him, not me.