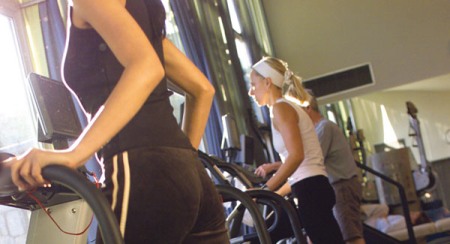 A few weeks ago I read an article (requires subscription) in the New York Times about how many people who were consumed with doing aerobics back in the 80s were now hobbling around on bum knees and bad hips–those that is who haven’t had their knees and hips replaced.

Mrs. Siemens, 54, a jewelry designer in Berkeley, Calif., said she often took as many as six aerobics classes a week in the ’80s when, she said, ”aerobics was new and everywhere and my friends and I all did it with a vengeance.” Sipping a drink from Jamba Juice, she added: ”I was jogging in place with Jane Fonda. I did my jumping jacks and high knee lifts with Richard Simmons. I twirled my arms and punched the sky while hopping on one foot to the music of Olivia Newton-John. It was supposedly all about staying in shape, but look at me: I can hardly walk.”
Mrs. Siemens isn’t the only possible casualty of the early aerobics craze that took millions of Americans to group exercise classes for the first time. The hordes came, believing that nonstop jumping, kicking and running in place to (bad) throbbing music was the ideal way to raise one’s pulse.
”I was on the concrete floors in bad tennis shoes jumping with everyone else,” said Jay Blahnik, a spokesman for the IDEA Health & Fitness Association, a trade group. Mr. Blahnik, 38, now teaches rowing, running and cycling in Orange County, but he spent a dozen years leading aerobics classes. ”A lot of people doing aerobics back then can no longer do any jumping whatsoever,” he said. ”They have problems with their backs, feet and hips.”
Some of the damage is severe. ”It’s not uncommon for us to see acute and overuse injuries from high-impact aerobics,” said Dr. Jordan Metzl, a sports medicine specialist at the Hospital for Special Surgery in New York. ”It’s part of the reason that aerobics classes are on the wane.”

Although these damaged backs, knees, hips, and shoulders are the legacy of the aerobics of the past, that’s not to say that more immediate damage can’t occur as well. All those people you see complacently loping away on treadmills with earphones plastered to their heads are only moments away from disaster. Some of them take nasty falls. Here is an example.
A treadmill fall in 5 stages:

STEP 1: The Trip. I’m not sure how it happened. Maybe her foot hit the front of the machine or maybe tripped or maybe she’s just clutzy. I don’t know. But it happened, and for the purposes of this story, I’m glad it did.
STEP 2: The Struggle to Stay Upright. Much like in the 5 stages of grief, one of the stages of the treadmill fall is denial. She didn’t want to believe it was happening. So after the trip, she’s halfway bent over and holding on for dear life – her poor little legs doing their darndest to keep up with the speed of the belt. She knows her very pride is at stake.
STEP 3: The Brace. This is also similar to one of the grief steps, acceptance. The belt is going too fast, the legs can’t keep up, she’s going down and she knows it. At this point she just gives into the inevitability of the fall. It’s a sad act of contrition.
STEP 4: The Fall. She braces for it, but she must not have been much of an athlete. Because the belt takes her feet backwards and causes her face to go forward – she’s not prepared for what is a nasty face plant. But God Bless her, even down on the canvas and in what must have been serious pain, she tries to grasp at the front of the treadmill to keep herself from getting pulled backwards and dumped on the floor. It’s like a scene from Sylvester Stallone’s mountain climbing epic “Cliffhanger”. But alas, we lose her. She can’t hang on.
STEP 5: The Unceremonious Dump. The treadmill takes her body and drags it backwards. However, she was listening to the TV that’s attached to the treadmill. That means she has ear pieces in her ears. And they must have been really stuck in there, because I swear they held her for a moment on the belt. It was like a mighty tug of war: the treadmill vs. the earphones. The treadmill won. The ear pieces were plucked brutally from her ears and her body got flung backwards and unceremoniously dumped on the floor.

This entire post should be read because there is a certain amount of schadenfreude provided by this particular fall.

During medical school, I once witnessed a particularly dramatic treadmill bust with my own eyes.
I was in my senior year doing a cardiology rotation at the VA hospital. As part of this rotation I was to help with the treadmill stress tests, which meant that I stood there and observed the cardiology residents perform treadmill stress tests. As anyone knows who has had a treadmill stress test, the whole idea is to ‘stress’ the cardiovascular system of the person being tested. This is done by increasing the speed of the treadmill and, if that’s not enough, by increasing the grade, making the patient run more uphill. As patients taking the test begin to tire, the doctors administering the test usually encourage them to go just a little longer to really stress their cardiovascular systems to bring out any problems that are only visible under a load.
One morning I showed up at the stress test lab as the residents were hooking the monitors up to a pretty good sized (big, not fat) elderly man who was decked out in a tee shirt, tennis shoes and shorts. I didn’t know any medical history on the folks being tested because they weren’t patients I had worked up, so I didn’t have a clue as to what was wrong with this guy, only that he was getting ready to get stress tested.
He got up on the treadmill and started walking. After a few minutes the resident started to crank up the velocity. The patient hung in there. A little more speed, a little faster walking. So far, no changes on the EKG. The resident hit the gas a bit harder; the guy keeps going. Finally the point was reached at which the patient was starting to labor to keep up, the point at which his cardiovascular system was beginning to be stressed and the time during which the residents could begin gleaning the most valuable information from the test.
As the treadmill moved a little faster, the patient was really huffing and puffing and showing signs – at least to my untrained eyes – that he was at the end of his tether.
“Come on, Mr. So and So,” said the resident. “Just a little longer; we’re almost there.”
Suddenly, Mr. So and So says (and these are his exact words), “Boys, I’m about played out.” And with that warning he lets go of the handrails and quits running.
He doesn’t go through the 5 stages mentioned above. The treadmill catapults him out the back in dramatic fashion and wedges him underneath an H-frame exam table halfway across the room.
It takes the residents a beat to figure out what’s just happened before they drop everything and begin to extricate him from beneath the table where he is pretzeled rear end first with his head over his knees. Since none of the responsibility for this fiasco accrued to me, and since there wasn’t room for yet another under the table, I remained in my detached observer position.
They got the old guy out, dusted him off and checked him over. He was none the worse for wear from the experience, but I doubt he ever forgot his treadmill adventure. I doubt that the residents did either. Nor did I. The entire affair imbued me with the realization that treadmills are not exactly benign.
As I’ve said before, virtually all of the benefit that comes from aerobic exercise comes from the increase in strength such exercise builds. If that is the case – and it is – then one needs ask the question: is aerobic exercise the best way to increase strength? The answer is, of course, No. Resistance training is the best way to build strength. What is the best kind of resistance training? In my opinion that would be a Slow Burn kind of workout.