I vacillate between which organization I think is the most harmful to the health of America: is it PETA or is it the Center for Science in the Public Interest (CSPI)? 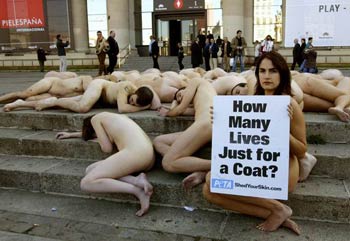 When I really think seriously about it, I realize that the CSPI is the more harmful by a longshot. The idiots at PETA are considered by most but the extremely simple minded as being an extremist organization full of idiots who want to take off their clothes to protest against fur. I’m sure these displays of nudity attract throngs of people (mostly prurient, I would imagine), but I doubt that they put many off of eating meat. Other than the simple minded, of course. But, that might not be all that bad. It could lessen their contribution to the gene pool.
The CSPI, on the other hand, is cloaked in the mantle of science. Whereas the media turns out to cover the PETA nude protests primarily because they’re so strange, this same media gives the idiotic pronouncements of the CSPI the legitimacy of real science. Since virtually all of the CSPI’s pronouncements are far from scientific nutritional reality, this press coverage creates a scorched-earth type of damage that has far-reaching untoward effects. We have the CSPI to thank for all the trans fats we’ve consumed over the past couple of decades. Remember, they are the one’s who came out disparaging butter, coconut oil, and beef tallow, causing restaurants and food processors to switch to trans fats – of which the CSPI approved then, thought they now profess to be against them. 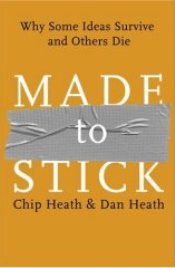 Not long ago I posted on a review of a book I read about that had a section on the tactics used by the CSPI to disparage and ultimately get rid of coconut oil in movie popcorn. What was this coconut oil, a perfectly good saturated fat, replaced with? You’ve got it: trans fat.
I ordered the book that was reviewed, Made to Stick, not because I wanted to read more about the CSPI, but because, for whatever reason, I enjoy books on marketing techniques. (And who knows why I enjoy them? I’m not a marketer, that’s for sure.) The book is a prettu good one about methods good marketers use to get their ideas to stick in the minds of consumers.
In my reading I came across the section about the CSPI and the method its marketing wizard used to savage coconut oil. I’ve reprinted the section in full below.

The Truth About Movie PopcornArt Silverman stared at a bag of movie popcorn. It looked out of place sitting on his desk. His office had long since filled up with fake-butter fumes. Silverman knew, because of his organization’s research [show me one paper they’ve published], that the popcorn on his desk was unhealthy. Shockingly unhealthy, in fact. His job was to figure out a way to communicate this message to the unsuspecting moviegoers of America.
Silverman worked for the Center for Science and the Public Interest (CSPI), a non-profit group that educates the public about nutrition. The CSPI sent bags of movie popcorn from a dozen theaters in three major cities to a lab for nutritional analysis. The results surprised everyone.
The United States Department of Agriculture (USDA) recommends that a normal diet contain no more than 20 grams of saturated fat each day. According to the lab results, the typical bag of popcorn had 37 grams.
The culprit was coconut oil, which theaters used to pop their popcorn. Coconut oil had some big advantages over other oils. It gave the popcorn a nice, silky texture, and released a more pleasant and natural aroma than the alternative oils. Unfortunately, as the lab results showed, coconut oil was also brimming with saturated fat.
The single serving of popcorn on Silverman’s desk – a snack someone might scarf down between meals – had nearly two day’s worth of saturated fat. And those 37 grams of saturated fat were packed into a medium-sized serving of popcorn. No doubt a decent-sized bucket could have cleared triple digits.
The challenge, Silverman realized, was that few people know what ” 37 grams of saturated fat” means. Most of us don’t memorize the USDA’s daily nutrition recommendations. Is 37 grams good or bad? And even if we have an intuition that it’s bad. we’d wonder if was “bad bad” (like cigarettes) or “normal bad” (like a cookie or a milk shake).
Even the phrase “37 grams of saturated fat” by itself was enough to cause most people’s eyes to glaze over. “Saturated fat has zero appeal,” Silverman says. “It’s dry, it’s academic, who cares?”
Silverman could have created some kind of visual comparison – perhaps an advertisement comparing the amount of saturated fat in the popcorn with the USDA’s recommended daily allowance. Think of a bar graph, with one of the bars stretching twice as high as the other.
But that was too scientific somehow. Too rational. The amount of fat in this popcorn was, in some sense, not rational. It was ludicrous. The CSPI needed a way to shape the message in a way that fully communicated this ludicrousness.
Silverman came up with a solution.
CSPI called a press conference on September 27, 1992. Here’s the message it presented: “A medium-sized ‘butter’ popcorn at a typical neighborhood movie theater contains more artery-clogging fat [Jesus wept] than a bacon-and-eggs breakfast, a Big Mac and fries for lunch, and a steak dinner with all the trimmings – combined!”
The folks at CSPI didn’t neglect the visuals – they laid out the full buffet of greasy food for the television cameras. An entire day’s worth of unhealthy eating, displayed on a table. All that saturated fat – stuffed into a single bag of popcorn.
The story was an immediate sensation, featured on CBS, NBC, ABC, and CNN. It made the front pages of USA Today, the Los Angeles Times, and The Washington Post Style section. Leno and Letterman cracked jokes about fat-soaked popcorn, and the headline writers trotted out some doozies: “Popcorn Gets an ‘R’ Rating,” “Lights. Action, Cholesterol!” “Theater Popcorn is Double Feature of Fat.”
The idea stuck. moviegoers repulsed by these findings, avoided popcorn in droves. Sales plunged. The service staff at movie houses grew accustomed to fielding questions about whether the popcorn was popped in the “bad” oil. Soon after, most of the nation’s biggest chains – including United Artists, AMC, and Loews – announced that they would stop using coconut oil.

Pretty effective, I would say. Notice how the authors of this book have even bought into the charade, using such phrases as :”[the CSPI] educates the public about nutrition,” “[the fat in the popcorn was] was ludicrous,” and, my favorite, “artery-clogging.” But you can’t blame them; they’re marketers, not scientists.
Were I to do my own marketing hatchet job on movie popcorn, I would put out a pile of sugar that is in volume about halfway between a quarter of a cup and a half cup. I would say that the consumption of a bag of movie popcorn is the metabolic equivalent to downing this pile of sugar. And I would submit that 3/8 of a cup of sugar would do infinitely more harm to a person’s metabolism than the 37 grams of coconut oil.
But, instead, we have the CSPI telling people that all the carb in the popcorn is okay, it’s the totally metabolically inactive fat that’s the problem. So, let’s keep the carbs and just add 37 grams of trans fat to make it really good.
Yes, definitely, the CSPI is worse.