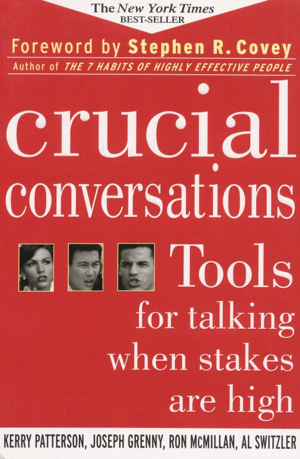 Several years ago I encountered one of the most gifted communicators I’ve ever been around. To watch this guy work was truly amazing. His ability to spread oil on roiling waters and bring people with violently disparate views together was almost magical. Now I’ve found a book that shows how he did it.
MD and I were involved with some other people in a business venture that had kind of blown up and was on the ropes. Interestingly, the business was not struggling – in fact, it was making money hand over fist. Which is strange because most blowups between partners come about when there is great financial strain in the business. In this case it was just the opposite.
We had all agreed on a CEO for the business, but at some point along the way, the other people involved had a falling out with this CEO and wanted to get rid of him. MD and I, on the other hand, really liked him, thought he was doing a good job, and wanted to keep him around. Every conference call and every face-to-face meeting became a sort of angst-ridden nightmare for all concerned. Even the CEO wanted out, but was afraid that his portion of the business would be at risk if simply walked away. He had a couple of people he knew could do the job, but he (and MD and I) figured the other partners would be suspicious of anyone this CEO recommended. We were all at a stalemate, with the distrust among us all growing by the moment.
As MD and I were championing our CEO our partners were, unbeknownst to us, looking for a replacement. They found someone they thought would be acceptable. They sent us this guy’s resume, which was impressive. He had been involved in both large corporate situations and in entrepreneurial ventures that had been monumentally successful. He had recently taken a company from start up to acquisition by a major corporate entity for a healthy sum. Our partners wanted us to talk to the guy on a conference call to see if we liked him. We grudgingly agreed. Grudgingly because we weren’t thrilled to be even giving the appearance of considering someone proposed by the opposition.
We got the guy on the phone and within about 20 minutes we were ready to hire him. We hooked him up with our CEO, who felt the same way. We met the guy and found him to be even more impressive in person. We all – MD and I, the CEO and the other partners – agreed to take him on after checking all his references, which were sterling. People couldn’t say enough good things about him.
He came aboard and, thanks to his communication skills, was able to dissolve a lot of the animosity and mistrust that had become a routine part of all company interactions. It was mesmerizing to watch a pro in action.
Unfortunately, the outcome didn’t have a happy ending. But it wasn’t entirely his fault. He was stuck in big company mode (even his startup was well capitalized) and couldn’t ever get his brain around our specific business model. He ended up pulling a lot of money out of the business for himself and his team (which is the one thing I feared from the get go), and when the funds ran low, he and his team moved on to greener pastures. Sadly, his big corporate outlook and strategies didn’t really work for our bootstrap business.
I did get to witness up close and personal (and at great expense) how a great communicator works, though.
Now I’ve discovered a book titled Crucial Conversations that teaches anyone to become a great communicator.
We all have conversations all the time about all kinds of things with family, friends and co-workers. But most of these conversations are the hum drum, everyday variety of communication that makes up most of our conversations. It’s the not hum drum, everyday conversations that we need to be able to deal with to be effective communicators, however; it is those conversations when the stakes are high and emotions are running strong that separates the real communicators from the rest of us. Those conversations that have large consequences that we constantly replay in our minds, telling ourselves over and over that if only we had said this or that things would have turned out differently. Crucial Conversations teaches us how to handle these conversations on the fly.
Sometimes we initiate these crucial conversations, other times we are sucked into them unawares. And when one is imminent, we have only three choices as to how to deal with them:

As the authors point out, these choices seem simple enough. We can avoid these conversations and suffer the consequences or handle them poorly and suffer the consequences. Or we can handle them well. Seems like an easy choice. Let’s handle them well. But it’s not that easy. Why? Because, typically, during these conversations we’re on our worst behavior. Why? Because of the same reason that makes us do so well on low-carb diets: our Paleolithic physiology. The authors explain:

When talking turns tough, do we pause, take a deep breath, announce to our innerselves, “Uh-oh, this discussion is crucial. I’d better pay close attention” and then trot out our best behavior? Or when we’re anticipating a potentially dangerous discussion, do we step up to it rather than scamper away? Sometimes. Sometimes we boldly step up to hot topics, monitor our behavior, and offer up our best work. We mind our Ps and Qs. Sometimes we’re just flat-out good.
And then we have the rest of our lives. These are the moments when, for whatever reason, we either anticipate a crucial conversation or are in the middle of one and we’re at our absolute worst – we yell: we withdraw; we say things we later regret. When conversations matter the most – that is, when conversations move from casual to crucial – we’re generally on our worst behavior.
Why is that?
We’re designed wrong. When conversations turn from routine to crucial we’re often in trouble. That’s because emotions don’t exactly prepare us to converse effectively. Countless generations of genetic shaping drive humans to handle crucial conversations with flying fists and fleet feet, not intelligent persuasion and gentle attentiveness.
For instance, consider a typical crucial conversation. Someone says something you disagree with about a topic that matters a great deal to you and the hairs on the back of your neck stand up. The hairs you can handle. Unfortunately, your body does more. Two tiny organs seated neatly atop your kidneys pump adrenaline into your bloodstream. You don’t choose to do this. Your adrenal glands do it, and then you have to live with it.
And that’s not all. Your brain then diverts blood from activities it deems nonessential to high-priority tasks such as hitting and running. Unfortunately, as the large muscles of the arms and legs get more blood, the higher-level reasoning sections of your brain get less. As a result, you end up facing challenging conversations with the same equipment available to a rhesus monkey.
We’re under pressure. Let’s add another factor. Crucial conversations are frequently spontaneous. More often than not, they come out of nowhere. And since you’re caught by surprise, you’re forced to conduct an extraordinarily complex human interaction in real time – no books, no coaches, and certainly no short breaks while a team of therapists runs to your aid and pumps you full of nifty ideas.
What do you have to work with. The issue at hand, the other person, and a brain that’s preparing to fight or take flight. It’s little wonder that we often say and do things that make perfect sense in the moment, but later on seem, well, stupid.
“What was I thinking?” you wonder.
The truth is, you were real-time multitasking with a brain that was working another job. You’re lucky you didn’t suffer a stroke.

This book is a well-written, no nonsense guide through the jungle of various crucial conversations we venture or even stumble into. Some of the examples of these kinds of conversations are listed by the authors below:

I’m sure you can think of (and have actually been involved in) many more than this short list. One I can think of that is probably applicable to readers of this blog: Talking to a loved one who needs it about a low-carb diet.
Both MD and I found this book enjoyable and enlightening. It uses a minimum of management-type jargon and is totally devoid of psychobabble. As you read through it you will intuitively feel that the advice the authors give is on the money. Best of all, in my opinion, at least, is that the techniques described require some work and discipline to acquire and become proficient in. (I always mistrust any book that presents X number of easy steps to master some complex skill.) In order to become a virtuoso communicator requires practice in the techniques described. Since you can’t always predict when a crucial conversation will be on you and don’t always know beforehand what’s it’s even about, you’ve got to internalize the methods so that you can use them while on autopilot. Which takes some effort.
The first step in any crucial conversation is the easiest: determine what you want the outcome to be. Being able to skillfully execute the techniques described in this book will get you to that outcome with your emotions and your relationships intact. I can’t recommend Crucial Communications highly enough.