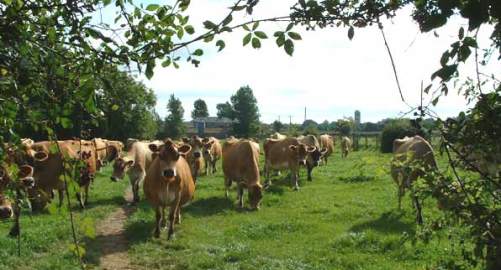 Researchers in the Netherlands conducted and published the kind of study I would love to see more of. The scientific literature is crawling with papers showing the benefits of low-carb diets, the advantages of having this or that vitamin, taking this or that mineral, and flossing regularly, but seldom is a study published showing the health difference the quality of the food makes. In April the British Journal of Nutrition published a study showing that the conjugated linoleic acid (CLA) in human breast milk increased as the mothers ate more organic dairy and meat products.
CLA is collectively a group of isomers of the 18-carbon linoleic acid. (Isomers are different configurations of the same molecule.) CLA, as a group, have a trans configuration in their structure, making them trans fats, but healthful trans fats. Yes, there are such things. (We humans even make our own trans fats.) There is some controversy swirling around CLA because studies have shown both health advantages and disadvantages to taking them in supplement form. As research progresses more information is being gleaned as to which of the many isomers are the ones that are good for us. So far, it seems, (as might be expected) the natural forms of CLA, i.e., those found in the meat and dairy products of ruminant animals are the good ones.
As the paper puts it:

The various CLA are produced in the rumen of ruminant animals mainly by the bacteria Butyrivibrio fibrisolvens through reactions of isomerization and biohydrogenation. These reactions lead as well to the formation of a wide variety of trans- and cis-monoenic fatty acids (especially C18 : 1 trans isomers). In addition, trans-vaccenic acid (trans11-C18 : 1, TVA) which originates from linoleic and linolenic acid plays an important role as precursor of rumenic acid. Very recent work has shown that the conversion of TVA in rumenic acid does occur as well in man. CLA are currently receiving much attention in nutritional research, since there is experimental evidence suggesting that these fatty acids might have anti-carcinogenic, anti-atherosclerotic, anti-diabetic and immune-modulating effects, as well as a favourable influence on body fat composition, i.e. on the proportion of fat tissue to muscle mass. Most of this experimental evidence derives from in vitro experiments or animal tests, which justifies the recent interest in clinical trials concerning the relevance of CLA for human health. The newly published reports concerning the effect of CLA supplementation on health-related outcomes have contradicting messages and in some cases an isomer-specific effect on the lipid profile could be shown. A double-blind study revealed that the consumption of dairy products naturally enriched in cis9, trans11-C18 : 2 increases the level of this fatty acid in plasma and cellular lipids.

The authors had done a pilot study in Switzerland showing that women who consumed at least 50 percent of their energy from organically produced foods had 30 percent higher CLA levels in their breast milk at 4 and 40 days post partum. They decided to refine their study by looking at the CLA concentrations in the breast milk of women who ate varying amounts of meat and dairy products from animals raised on organic feed.

It is known that the lipid composition of cow’s milk is strongly influenced by the stable conditions and feeding management, with milk from cows held in organic farms (Germany, Italy) containing significantly more CLA than that from their conventionally held counterparts. Note that farms certified as ‘organic’ are those in which the use of synthetic inputs, such as synthetic fertilizers and pesticides, preventive veterinary drugs, genetically modified seeds and breeds, most preservatives, additives and irradiation are excluded (htpp://www.ifoam.org/sub/faq.html). Since the major source of CLA in man is the diet, we have hypothesized that the amount of CLA in the milk of breastfeeding women could be augmented by increasing the amount of organic dairy nutrients within their diet. The sources of CLA for man comprise not only dairy products but also ruminant meat; therefore, emphasis was put on these two groups of nutrients.

The meat and dairy is considered ‘organic’ even if it is from grain-fed animals as long as the grain isn’t genetically modified, and has been grown without pesticides, synthetic fertilizers, etc. The levels of CLA in grass-fed animals are the highest of all, so it would be interesting to see this study repeated comparing the breast milk CLA levels in mothers who got their meat and dairy from grass-fed animals verses those who got theirs from the standard ‘organic’ sources.
I know which side my money would be on.